Nick went with me today for my 32 week OB appointment. My doctor asked him if he wanted to be a gynecologist someday. Probably because of how interested he was in all of the equipment in the room. Nick was especially fascinated with the plastic uterus model and the stethoscope. He kept putting the stethoscope up to his stomach, saying, "I listen to the baby in my tummy!" (Nick is obviously not quite clear on the whole baby-in-mommy's tummy thing.) 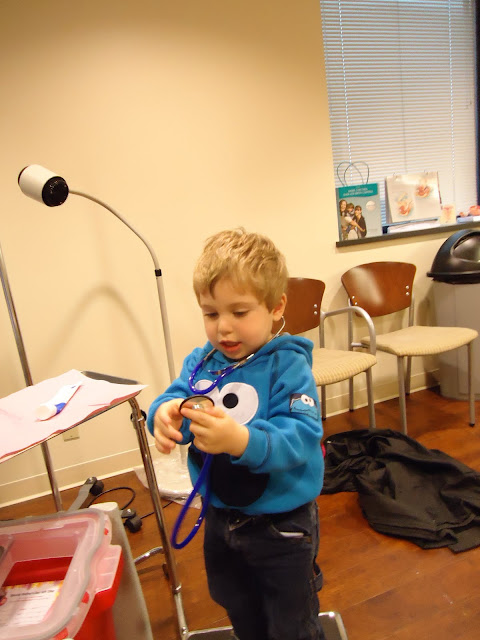 Apparently, from this point forward, I have to go in for an NST (non-stress test) once a week. After 34 weeks, I may have to go twice each week. The baby is looking great, but they're being extra cautious because I'm a high-risk pregnancy. I don't mind the NST, but I'm going to have to try to schedule them so I go when I don't have Nick. A doctor's office is filled with very expensive "toys" that he shouldn't be playing with, and it was way too tempting for him. 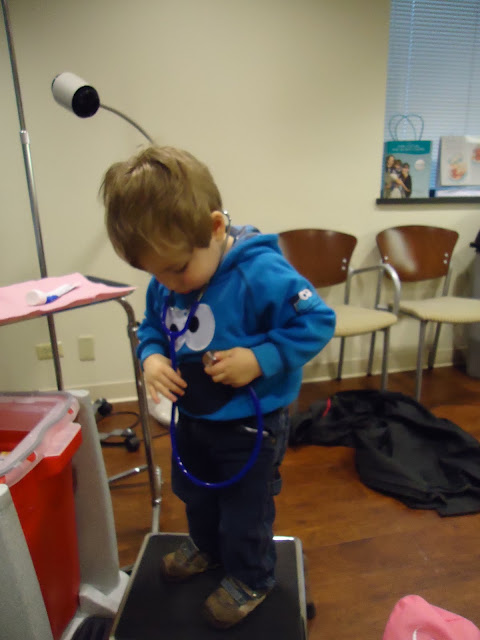 When you have an NST Test, they put two straps around your belly. One monitors contractions, and the other monitors the peaks and valleys of the baby's heart rate. The thing is, you can't move for at least 20 minutes during this test, and if your belly wiggles, it might register as a contraction. Nick kept trying to climb up my legs and wreak havoc in the room. He ripped up a bunch of magazines, took bunches of kleenex out of the box, and stole a pen out of my purse. Then, right after I'd been all strapped in to the machine, Nick announced, "I need to go pee pee in the potty!" Sigh. Poor timing. Between the NST Test and another 20 minutes of waiting for the doctor, Nick caused quite a bit of trouble. 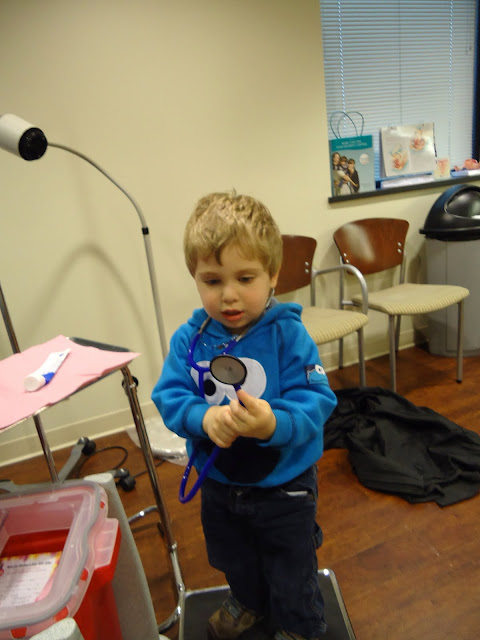 First, he was fascinated with the sharps box, and I had to wrestle him away from it. (Such a horrible parent am I--I won't let my child play with a box containing used needles.) Then, he found the plastic uterus model, and decided that it would be good to throw at me. Thank goodness it wasn't breakable. By the time he got the stethoscope, I figured it was harmless enough.

It was pretty cute, though, how Nick was talking to the nurse. He announced to her, "I'm going to have a baby brother! He in mommy's tummy." Then he showed her his tummy. Nick got a sticker for his loquaciousness. Then he promptly wet his pants. Finally, we had to run outside in the pouring rain. A fitting end to an interesting doctor's visit.
Posted by Melissa E. at 9:17 PM