A Pizza Party for Two-Year-Olds

Yes, indeed. There is a family so courageous, so heedless of danger to their home and property, that they'd have a children's party for their two-year-old. They invited a lot of other two-year-olds, including Nick. This was an awesome party! It was also Nick's very first kid's birthday party. 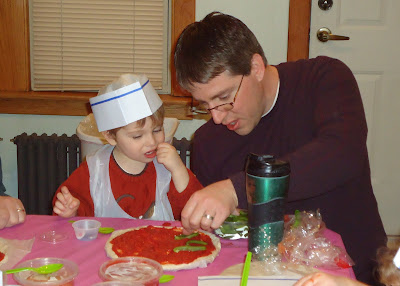 Not only was this a pizza party, it was a "make your own pizza" party, from Homemade Pizza. There were hats and aprons for the kids to wear, and each kid got to make his or her own pizza. Nick loved this, although he kept eating the ingredients. 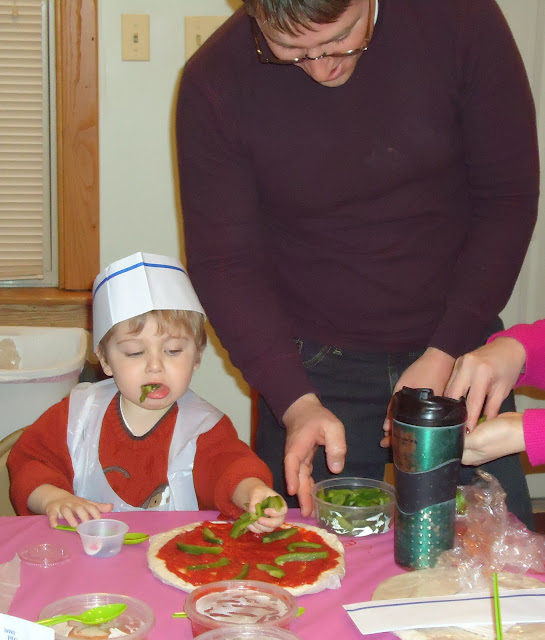 We thought the idea for this party was really creative. Our hosts had sliced grapes and strawberries, and the most delicious cupcakes. I'm not quite ready to brave having a kid's party, but at some point, when I do, I hope it's as fun as this one was--they even had little favor buckets for each of the guests.
Nick, however, was a little bit naughty. He kept stealing Hershey's kisses out of the other kid's buckets when we weren't looking. He likes chocolate a little too much. I wonder where he gets that from.  ;)﻿
Here's Zosia (the birthday girl) and her daddy making a pizza. Would you believe that none of the kids threw pizza sauce or toppings at one another? 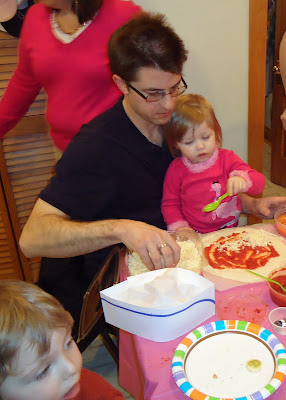 Now, planning for a birthday party is a lot of work, and you can't always expect things to go as planned. The birthday girl, Zosia (shown above in the adorable pink sweatshirt) wasn't feeling well, and slept through part of her own party. I can remember the same thing happening at Nick's 1st birthday party. You just can't predict what'll happen with kids.
﻿ 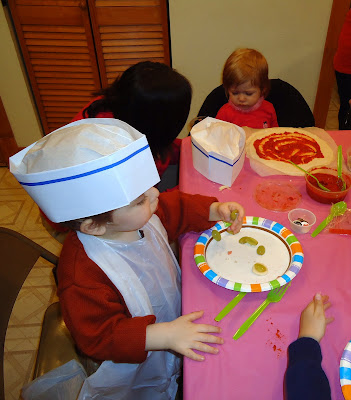 ﻿
Nick loved playing with the other kids, and didn't seem shy at all. Greg and I were both pretty quiet kids, so I'm not sure where Nick got his gregariousness from.  We're just glad he likes being around other children. . . you see, in about two months, there will be two children in our house all the time.
﻿The pizza, by the way, was delicious.   :)
Posted by Melissa E. at 6:59 PM