During my spring break, Nick and I decided to take a day to go and visit my grandmother, who Nick calls Gigi. (G.G.=great grandma) She just had cataract surgery and we figured she could use some cheering up. Nick picked out pretty yellow tulips and cupcakes to bring for her.

I think Nick's favorite part of the visit was romping with Lucy, the Yorkie pup. 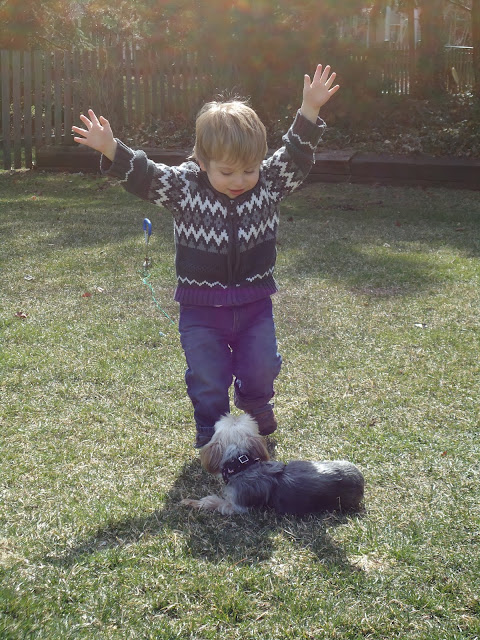 My grandma made us lunch and dinner, and we talked and watched Nick run around and try to destroy things. At one point, he kept sneaking into the living room and stealing Hershey's kisses from the candy bowl.  For a two-year-old, he can be pretty surreptitious--Nick would put the candy behind his back so we couldn't see it. He must've gone back seven or eight times before we finally put the candy bowl where he couldn't reach it.

That really brought back memories for me, because I can remember doing the exact same thing. In fact, one time, when I was about 5 or 6, I snuck a whole bunch of chocolate out of that same crystal candy bowl and hid the wrappers under the couch cushions. I was caught and I can remember having to write a silly sentence about 100 times. It was something like: I will not take candy without asking. It seems my son has inherited the tendancy to swipe chocolate whenever it is in the vicinity.

It was a sunny day, so we decided to go outside with Lucy for awhile. Even though it was somewhat chilly outside, Nick wasn't even a little bit cold. Too busy running full speed towards and away from the puppy, he got quite a bit of exercise. You can tell, though, that Gigi was a little chilled. 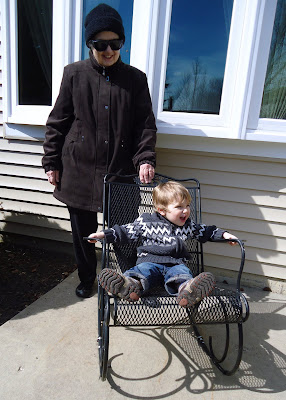 I really love this time in the spring when you can have the windows open and let in the fresh air. Spring is such a hopeful time, and I have to say that Nick is so much more mellow when he gets to run around and play outdoors.

Nick has quite a few doting grandparents--four grandmas and three grandpas--but there's only one Gigi. Since Nick lost his Grandma Marie in February, she's his only living great grandparent, and very special to him. You'd think he'd get confused with all of the relatives, but we have pictures up all over the house, and Nick can point to them and name everyone. He knew just who I was talking about when I said we were going to visit Gigi. In the car, he asked, "I see Gigi. Puppy, too?" 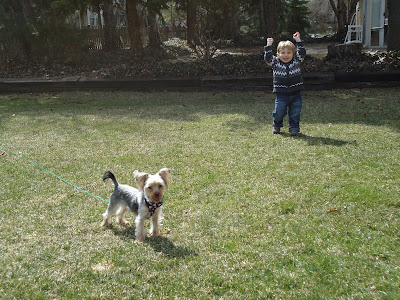 At times, I felt sorry for the puppy, because Nick was not very gentle with her. But Lucy kept coming back for more, and licking the heck out of my boy. He didn't seem to mind much. 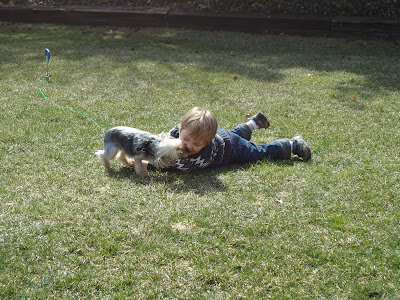 I spent most of my spring break working on a very big freelance writing project, all while potty training Mr. Nick. I also had papers to edit for some friends and a Power Point presentation I was working on for work. Not very relaxing.

So getting to take a rest from the computer and drive up for some adult company was really nice. I think Gigi liked the company, too, though she looked pretty tired by the time we left. It's hard for anyone to get used to the energy of a two-year-old! 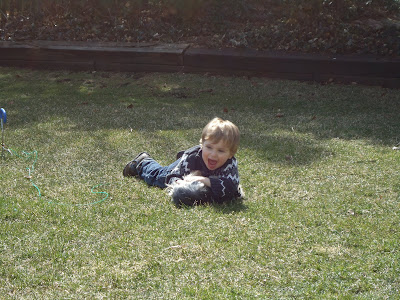