An Unexpected Trip to Northern Wisconsin

On Thursday morning, we set out on a journey that we hadn't planned on taking. Greg's grandmother passed away, and we went to Merrill, Wisconsin, for the funeral. The drive up there takes at least 5 hours, more if you stop for food and bathroom breaks. We left around noon and didn't arrive at our hotel until nearly 7 p.m.  Crabby two-year-old plus mourning driver plus pregnant lady equals a challenging ride.

When we arrived at our hotel, it only took Nick about three seconds to find the phone and figure out how to dial it. I have no idea where he learned this; we only have cell-phones and I haven't had a corded landline since. . . well, since I was in college. But he somehow knew what to do, so we had to unplug the phone so that he wouldn't randomly start dialing people. 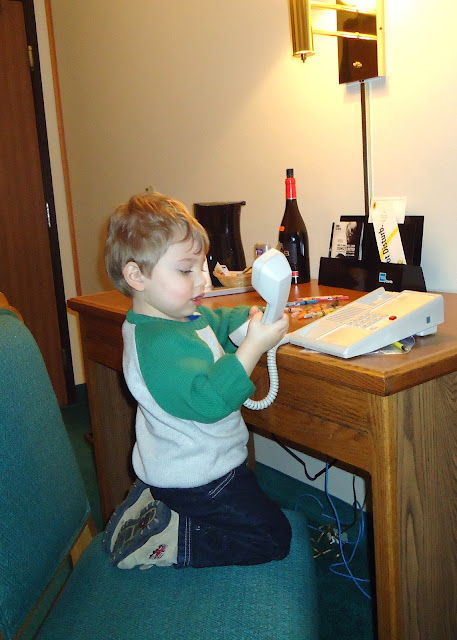 All of our previous trips have been for fun, but this one was (obviously) tinged with sadness. At the service, the minister talked about Grandma Marie's four grandchildren and three great-grandchildren, with one on the way. It occurred to me then that she would never meet her great-grandson, and that was tough to think about, especially with all of the pregnancy horomones running through my body. Greg and I walked around and looked at all of the pictures from her life, and I think that helped him with the grieving process.  Living 96 years is quite an accomplishment, and it was impressive to see all of the things she was able to accomplish in her life.

I didn't take many pictures, because it somehow seemed inappropriate to snap pictures of Nick and his cousins running around and playing at the visitation. Plus, Nick decided to perform like a typical two-year-old during our trip. He barely slept at night, refused to nap, would only eat junk food, and threw countless fits. So pulling out my camera was not even on my mind. Thank goodness for Grandma Toni, who, along with Nick's Aunt Sarah, helped me distract Nick. When Nick started having constant tantrums right before the service, Grandma Toni offered to take him back to the hotel room. I think I have the best mother-in-law in the whole world! I don't know what we would've done otherwise.

One bright spot in a sad trip was the hot tub at the hotel. There was a pool, too, but only Greg was brave (and cold-tolerant enough) to take Nick there. 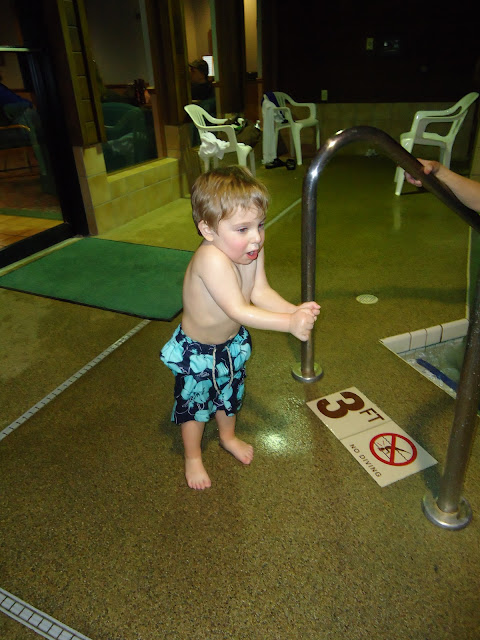 The rest of us opted to stay in the hot tub. I would like constant access to a hot tub. I think Nick agrees, because through our whole trip, he would randomly start asking, "I go in the hot tub?! I go in hot water!" 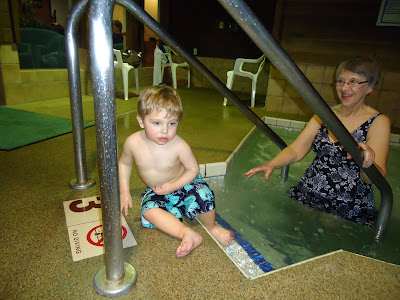 You would think that would've tired him out, but no. Even though he never had a nap and is usually asleep by 8:15, Nick was still screaming at the top of his lungs, refusing to sleep, at 11:30. Nothing would stop his screaming. Lately, he does this thing where he'll throw his blanket, his Elmo, or his stuffed dog out of the crib, then scream for it back. The exchange goes something like this:

The situation repeated itself for several hours, with Nick's pillow, blanket, book, and stuffed dog. I could not find anything that would stop his screaming. I know better than to play the throwing game with him, but it's hard not to give in when I would've done anything to get the yelling to stop. When he screamed for a straight hour, I was really afraid someone in the hotel was going to complain and we'd be kicked out. No one ever complained, but I feel really, really bad for anyone with rooms near ours.

Nick's incessant screaming plus my severe allergies made for a very long night, with an all-day car ride today to top it off. He did sleep in the car, though, and today he was better overall. Hopefully being back in his bed tonight and back to his regular schedule (and diet) will put him back on track.
Posted by Melissa E. at 11:11 PM