We're a little frustrated today. Nick is over his fevers, but clearly still isn't feeling well. He's spent today throwing fits over every little thing. In the car on our way back to Plainfield this afternoon, for example, he had at least four screaming, thrashing fits lasting 20+ minutes each. Tonight, he's been growling and flinging himself around until he bangs his head. Then he cries even harder. Nick has gone from being able to tell us exactly what he wants to throwing himself around the room screaming incoherently, with his only understandable word being, "No!"

I took this picture during one of his few cheerful moments, when he was playing his grandma's piano this morning. Check out his hair. Nick had some major bed-head this morning. 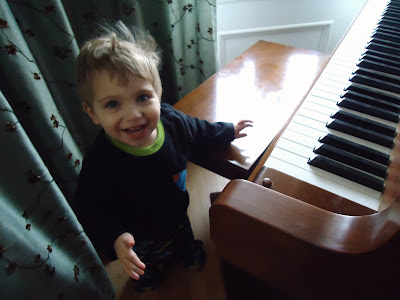 We spent much of our weekend going up to see Greg's dad and step mom in Rockton, IL. Each year we go up around this time because Greg's birthday and his dad's are both in the beginning of February. ﻿Since Nick's fevers were gone by Saturday morning, we decided to keep our plans and drive up. I'm glad we did, because Nick seemed to be in a much better mood around other people. He was especially glad to play with the puppies. These are very tolerant dachshunds, and they actually like it when Nick pets them. . . 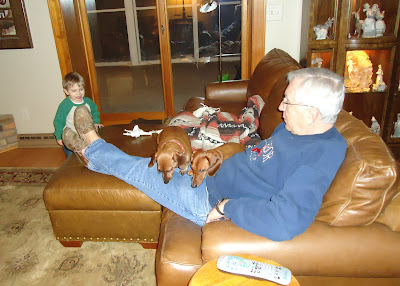 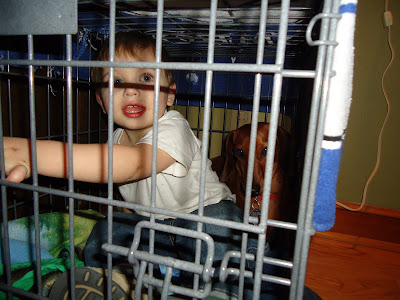 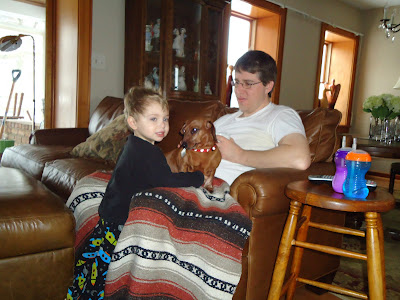 Plus, visiting Nick's grandparents always makes him happy. They fed us a delicious snack of Gorgonzola cheese and Anjou pears. They always have chocolates out in a little dish, and Nick needs to partake every time he goes near this dish. How many little boys enjoy dark chocolate? Well, this one does. Observe the interesting and colorful combination of marker and smeared chocolate on his hands. 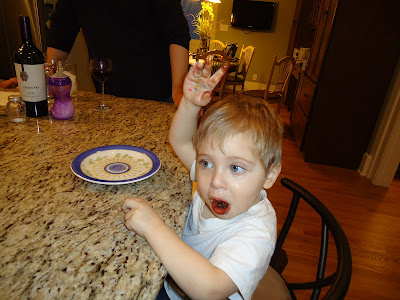 Yummy, huh? The best part of our weekend was actually dinner on Saturday night. Nick's grandparents had two of their friends come over and watch Nick so we could all go out. How do you think he behaved for them? Perfectly, of course. They were charmed, and he was a perfect gentleman.
He waited until this morning to do his whole fit-throwing and inconsolable screaming thing. The dinner was probably the single best meal I've ever had this side of the Atlantic. I'll post about that meal, and the amazing bathrooms in the restaurant, tomorrow. Hopefully by then my sweet little man will have returned. I miss him. 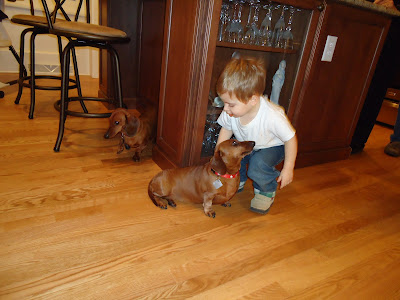