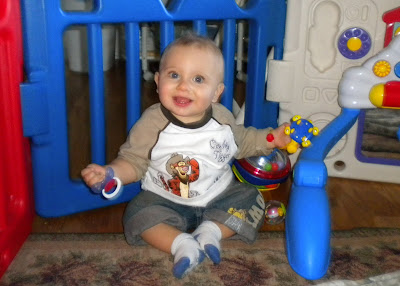 My baby has some fuzzy hair. After sleeping in his car seat, it sticks straight up. I suppose mine would do the same thing, if it were shorter. Right now Nick is bouncing around the living room backwards on his butt, grasping two animal crackers. He isn't eating them, simply holding one in each hand as if each were a magical talisman.
Yesterday I spent a lot of the day in the kitchen, baking 3 loaves of bread and getting ready for the week. I've been making only one or two big meals a week, then having us eat from the leftovers. It saves us a lot of time, since I've been extremely tired in the evenings. It is so much easier to just pull out some leftovers from the fridge. Greg and I don't mind eating leftovers.
Then, for lunches, I use a whole loaf of homemade bread to pre-make sandwiches and salads for Greg and I to eat at work. While I was in the kitchen, Nick joined me and played with the pots and pans. He learned how to use a wooden spoon to bang on them, and this was really fun for him, although the decibel level was probably pretty high. A wooden spoon makes a horribly loud noise when banged onto an overturned pot. But Nick was having fun, so it was all good.

I was very proud of him last night; he really ate dinner with us for the first time. We pulled his highchair over next to us, and he ate exactly the same things. We ate broiled chicken with a mustard/basil/lemon topping, asparagus, and little baked red potatoes. Nick ate little cut up versions of the whole dinner. He seemed to like it; he grabbed fistfuls of the cut up food and stuffed them into his mouth. 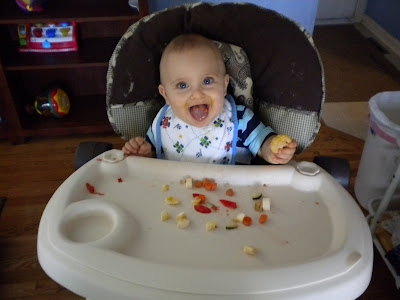 Since Nick started with his new babysitter, he has wanted table food more and more. There are twin 2-year olds there, so I think Nick wants to be like them. Here he is eating chunks of tomato, carrot, and banana.

I like how he wants to eat whatever we're eating. I am desperately hoping to have a kid who will eat the kinds of food that we eat; I'm not willing to make two meals each night. So far, Nick seems satisfied with what we're feeding him. But I have a feeling this may change as he gets older. Hopefully he'll still eat asparagus, avocado, cottage cheese, cucumber, and lima beans when he gets old enough to be picky.
Posted by Melissa E. at 6:08 PM