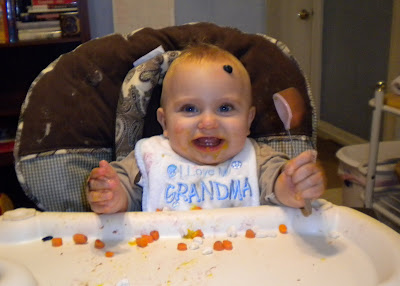 Sometimes babies need baths. Especially since finger foods are messy. Yes, that is a half of a blueberry stuck to my son's forehead. I believe the orange stuff around his mouth is a mixture of carrots and banana.

Diaper changes can make baths even more necessary. You see, the "pincher grip" that is a developmental milestone for infants, is also a pain in the rear end. For once a baby can use the pincher grip to lift cheerios, he can also use it to lift a dirty diaper, whilst he is being changed. Thus, having the pincher grip, said baby boy can easily fling his dirty diaper up against the wall, coating both himself and his exhausted mother with its contents. 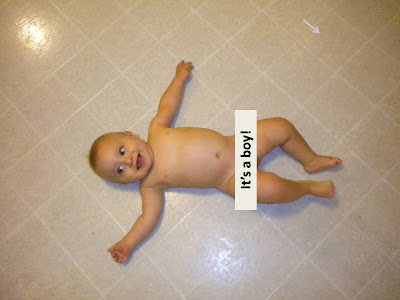 The easiest way to deal with such a foul mess is a bath. Of course, the bedraggled (and excrement covered) mother must first use baby wipes to clean off the worst of the mess from the baby's hands, feet, and tummy. Then she must change her shirt (which will never be the same again).

Next, the baby must be carried, naked of course, down to the kitchen so that a bath can be readied. This particular baby thinks that naked time is the best time, and he loves every second of his unclothed time. 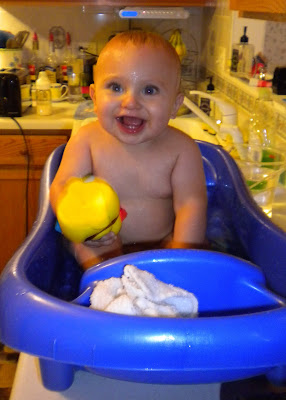 The final step in this process is, of course, the bath, which sanitizes the baby until he again uses his pincher grip for evil deeds.

Here Nick is playing with his favorite rubber duckie. He got it from his Aunt Sarah, and he loves to wave it around and chew on it while sitting in the tub.

Singing in the tub is another of Nick's favorite hobbies. He bounces up and down and hums to the beat of his own drummer. Nick's favorite thing is when I spray him with the kitchen sprayer. It must tickle, because he giggles uproariously.

The video below shows Nick chewing his duckie and singing happily. It does not show how he threw a fit when I tried to take him out of the tub. It also does not show how he waited until he was covered in baby lotion to try to squirm away from me (while trying to avoid getting his pajamas put on).

I've been extremely tired since school started. I'm thinking it is my thyroid, and hoping this exhaustion will abate once the doctors have figured out the right level of medication. I have been going to sleep as early as 8 p.m., and sleeping through until 6 a.m. Yesterday I did a pilates DVD, and I was nearly asleep on my feet by the time I made it through. Today I went to the YMCA, and I could've easily gone to bed before 7 p.m. However, I had a baby to take care of and some poop to clean up.

I also make it a point to play with Nick for about an hour each day. Often, Nick will play happily by himself and I can just talk to him while I do whatever I have to, popping my head in and showing him different toys. It isn't that I'm not with him all afternoon and evening, but for one hour, I just focus on him, talking to him and playing with him in the baby cage. Then, after dinner and bathtime, I read two or three board books to him before bed. I think it's a good routine.