No Wonder I Never Got Raspberries. . . 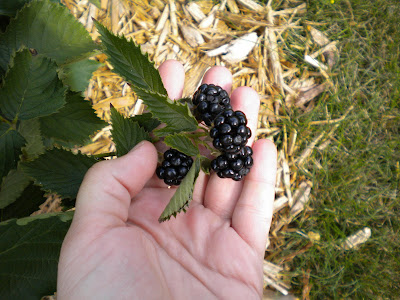 I have been waiting for raspberries since my first spring in this house, back in 2007. That year, I bought two super-expensive, already big raspberry bushes guaranteed by the gardening center to create beautiful, plump berries. I planted both of them exactly according to the instructions. Then, I watered them and waited.

The last two years I never had any berries. That first year I guessed I had planted them too late. The second year I didn't take care of them very well; I was pregnant and didn't feel like messing with weeding or watering. Frankly, those raspberry bushes could've sprouted $100 bills and I wouldn't have noticed. I was too busy being pregnant and eating goat cheese and water crackers.
But this year I really paid attention to these plants. They were pampered and watered and mulched and fertilized. For mother's day, my husband went to the same nursery and bought me a third raspberry plant. Strangely, this raspberry plant looked different from the other two. I finally figured out why. I have blackberry plants. Either that, or my raspberry plants are having an identity crisis. Because I have the most gorgeous blackberries out there. Look at the picture. Are those not blackberries? Sigh. 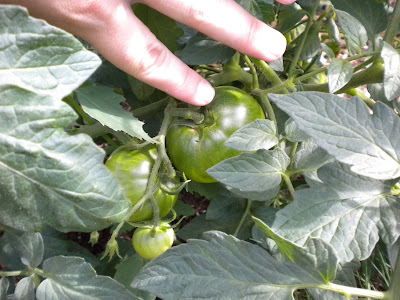 I guess it isn't all bad. At least I have gorgeous looking blackberries. No raspberries, though. However, the tomato plant I got halfway through the summer for $0.75 (see link) is now absolutely huge and sprouting about ten green tomatoes.

I also filled my classroom with 15 indoor plants. I was very excited to do this; I actually went to Lowe's twice to fill up my cart. I'm still looking for some cool pots to replant some of them in and a cool looking watering can. I had a few students in my room today for testing, and they were commenting on my succulents and ivy. Kids are so funny. One little girl asked me if the ivy plant liked hanging up by the ceiling. I told her I'd never thought about it before. She said that she thought it did because it was like being on the monkey bars. Moments like this are why I went into teaching. Maybe I'll look for a few more haniging baskets. 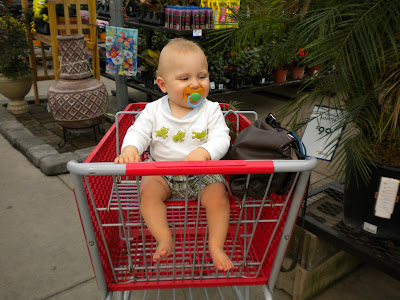 Nick helped me pick out some of the plants, and it was a struggle getting him to not eat them. I ended up with small ferns, ivy, palm, succulents, bromeliads, african violets, and a bunch of other plants. I'll have to take pictures of them one of these days. If I don't kill them first, anyway.

I think I'm getting a lot more exercise just chasing Nick around. He is going from one end of the living room to the other, and destroying things in his wake. He dumped a bottle of formula onto the floor already, and tried to take the vent out of the floor. We have these long lacy curtains on the two windows flanking our front door, and he pulled down one set already. I believe he may have eaten a spider, as well, but it's hard to be sure.

But he is filled with joy as he discovers new places he didn't even know existed. Today he crawled into our downstairs powder room, and acted as though it were DisneyWorld. For him, I guess it was.