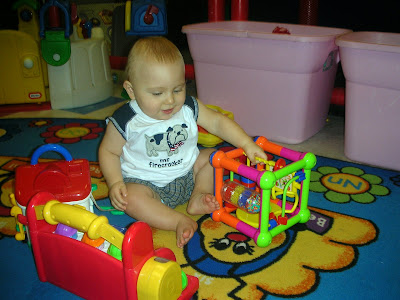 For several months, I've been putting off getting back into a regular workout schedule. My endocrinologist said my thyroid is all screwed up, and that is why I'm having trouble losing the last 20 (okay, 25+) pounds of baby weight. Part of it is tiredness--taking care of a baby is a workout in itself, though not one that results in cardiovascular health or weight loss.

I also felt guilty about dropping Nick off at the child care center at our YMCA. "He's too young," I thought. "He'll get scared if I leave him with strange people." But today I decided to try it.

Nick was totally fine. Not only did he not cry when I left him, he reached out for the day care teacher and grinned at her. Didn't even look back at me. I was chopped liver. This was new and exciting and colorful. And loud. 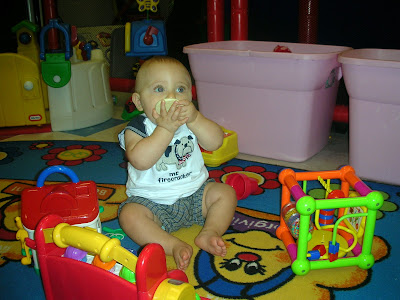 The whole time I was on the elliptical trainer and the strength machines, I was listening for my name to be called over the intercom. I never heard it. That's because the child care center has TOYS. NEW TOYS that Nicholas has never seen before. Plus, there are new people and other babies there. In other words, Nick was in baby heaven. I swear, I went to pick him up and he didn't want to come. He just kept chewing on a plastic cookie and blinking, as if maybe I would go away again and he could play some more. Usually he's happy to see me, and when I hold out my arms, he raises his for me to pick him up. Not today. He just looked at me long and hard and then looked away.

So now I have absolutely no excuse not to work out. I'm sure that there's nothing more Nick would rather do than play in this wonderful place for a few hours a week. Fun for him, but not so much for me. I'm the one who has to sweat. No matter how much I try, I hate exercising. I love a brisk walk or some hiking or casual swimming. But true exercise is something I've always hated. When I had take PE, I was always the kid standing around in left field who ducked when someone threw a ball her way. Now when I exercise, I always bring a book to get my mind off of things. Perhaps I can forget I'm even exercising until the torture is finished. The great thing about an elliptical trainer is that it tracks your heart rate and beeps when you need to go faster. Therefore, I can read and zone out. That is my kind of exercise.

Unfortunately, today I brought "I Was Told There'd Be Cake," by Sloane Crosley. Not that it was a bad book. Actually, I thought it was charming, clever, and well-written. It made me laugh out loud more than once. But I realized about halfway through it that I HAD READ IT BEFORE. At first, I thought maybe I'd done that preview thing on amazon and read the first chapter. But I recognized the plot of every single essay. I read it again anyway, though. It was great even the second time. 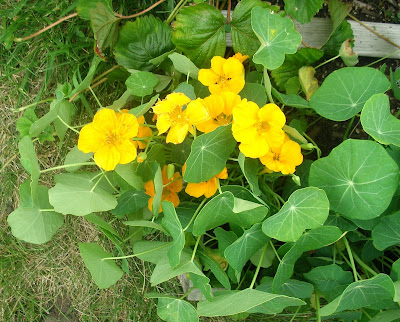 For some reason, I was very motivated today. I ended up doing some hard core gardening and watering all morning. I researched online and found that the best way to kill the beetles is to drown them in soapy water and leave the bodies for their friends to find. Gruesome, but true.

I trimmed bushes, watered my garden, and cut down the catnip again. (It keeps getting out of control.) I killed at least 4 nasty prickly weeds, each over 2 ft. tall. Even though those darned Japanese beetles (for that is what they are called) ate lots of strawberry leaves, they didn't touch the nasturiums. Don't they look pretty?
Posted by Melissa E. at 9:46 PM