Coxsackie Virus and a Crazy Cowlick 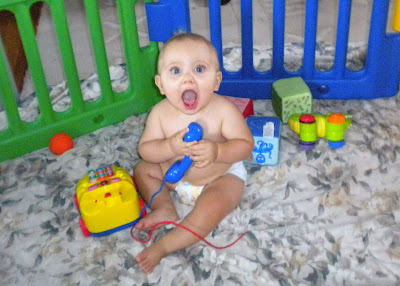 I love this picture. I surprised Nick with the camera, and he wasn't sure what to think. But the real reason I love the picture is the adorable cowlick on the back of his head. He has this fuzzy blonde little piece of hair that just won't stay down.

Nick had coxsackie virus this week, and this was his first time being really sick. He was extremely crabby on Monday night, and he freaked out on me when I left him at the YMCA. He was inconsolable and just wanted to be held. That was my first day back at work, so I thought the schedule change was upsetting him.

When Greg was getting Nick ready on Tuesday, he noticed that he felt hot, and his temperature was over 102. Our doctor said it was probably a virus. So he stayed home Tuesday, and Nick was having really high fevers by that evening. I was on the phone with the doctor after I got a temperature reading of 104.8, but I guess that can happen with babies. Nick was better the next day, and my stepdad watched him for us. (Thank goodness! He is a lifesaver--Greg and I don't get a lot of time off.) 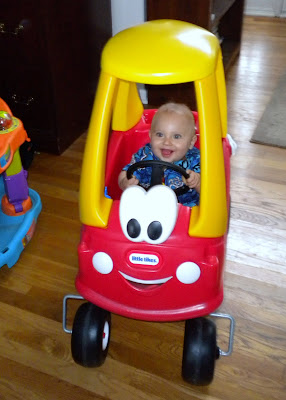 He is doing better now, except that he's been super crabby the last few days. I've also noticed that Nick has started to mature more. I guess when the doctor checked him on Thursday, he'd lost a pound, but he is moving way more than he was before. He's even driving his little car, with his hands at ten and two!

Anytime he's down on the floor, he is wiggling around, scooting, rolling, and trying to pull up. This morning Greg found him sitting up in his crib, which he's never done before. Then, tonight, I watched him switch from laying down on his back up to sitting and then down onto his tummy up to his hands and knees. That kid is in shape! He can move 5 or 6 feet to get to something he wants, like the ritz cracker below. 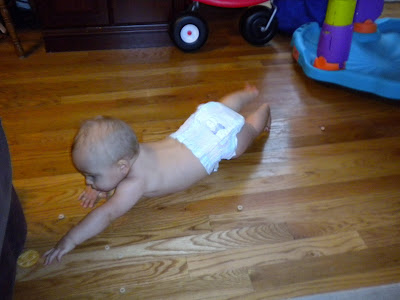 As for me, I'm proud to say that I managed to do three pilates band workouts and go to the YMCA twice. Each time I did 35 minutes on the elliptical trainer and kept my heart rate between 125 and 140 the whole time (about 2 miles). It might not sound like a lot, but for me, that's a great week of exercise. Tomorrow I want to go back to the Y and do a longer workout. Hey, at least I'm trying.
Posted by Melissa E. at 9:44 PM