I believe this qualifies as crawling.

We can't deny it anymore. Nick is definitely crawling. We have expanded the baby cage to ten panels (see picture below), and there is trouble whenever Nick is out of it. So far this afternoon, he has tried to eat a library book, tore up a piece of my mail, attempted to climb the stairs, and clunked his head on the coffee table twice and the desk once. As I'm writing this, he grabbed a box of cheerios and dumped it over his head and all over the floor. I am having a battle between letting him have things that won't hurt him and making a mess. With the cheerios, as soon as I tried to take the box away, the bloodcurdling screams started. So I figured he could have it, at least while I'm watching.

So why don't you just confine him, you're thinking. Yeah, that works for a little while. But Nicholas has learned that the baby cage is indeed a cage, and this is the face that I get. 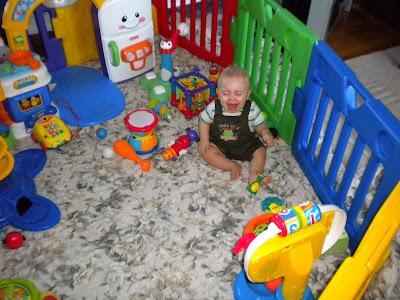 Because, of course, I am such a cruel mother that I would leave my baby ALONE while I start dinner. Even worse, I leave him in a CAGE with about a hundred toys, most of which sing and make annoying noises. I am just evil.

Of course, as soon as I sit next to him and let him use me to climb to a stand, Nicholas is as happy as a clam. He dances, he takes steps, he wiggles with joy. Now that he has figured out crawling, he's ready to skip right to walking. Sigh.
Posted by Melissa E. at 5:42 PM