Nick has figured out the pincher grip, and now he can pick up Cheerios and eat them with his two teeth. The other tooth popped through yesterday, so now there is a matching set of chompers. He has about a 3:1 ratio when you figure how many he drops for every one he eats, but at least he can get them in his mouth. He likes to talk with food in his mouth, too, but I figure it's a little early for etiquette lessons. I took this video this morning as he was munching and chatting. 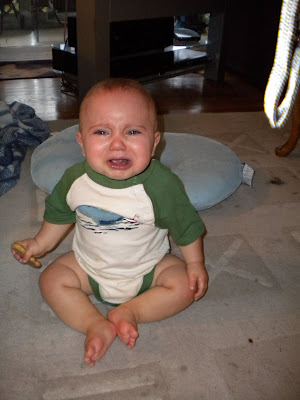 Today his new trick was banging his head. No matter where I put him down all day, he promptly scooted backwards as far as he could go until his head banged into something. Then he cried pitifully until I picked him up. So I'd go put him down and he would scoot somewhere else and bump his head. Even in the baby cage he'd scoot until he hit his head on something. Sigh. He didn't hit his head very hard, but the poor guy must have a headache from all that bumping.


After my YMCA visit on Wednesday, I ended up doing one of those Pilates DVDs Thursday. I figure I'll rest today and do some kind of exercise tomorrow. You'd think that the pilates would be easy, but it left me incredibly sore. Nick thinks it's hilarious when I use the resistance bands to stretch my legs over my head. He watched me the whole time, entranced by my grunts of pain. 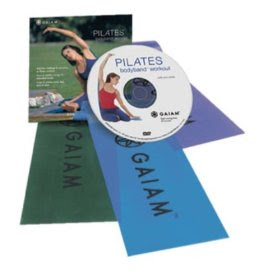 The funny thing about the Pilates workout is that I feel a lot older than my 31 years. The tape is pretty good, and I like the resistance band even though I'm using the purple, or wimp, band. In fact, there are three ladies who do the exercises, and throughout the whole tape, the teacher keeps saying, "If you're a beginner. . ." or "if you're following Charlotte. . ." and I was both a beginner and following Charlotte. Charlotte was the elderly lady who had to do modified versions of the exercises. I followed her and I still feel like I tried to scale a mountain. Or step in front of a truck.


It was also really hard trying to complete a workout with a screaming baby in the room. Nick wasn't upset or anything, he just likes to shriek. I'm supposed to be concentrating on my breathing and stretching, and all I can hear is "Aaaaaarhaaaaaaaaggaaaaaaa!!!"

I will try to persevere and continue working out more often. In the meantime, here's a picture of Nick dancing with his daddy. 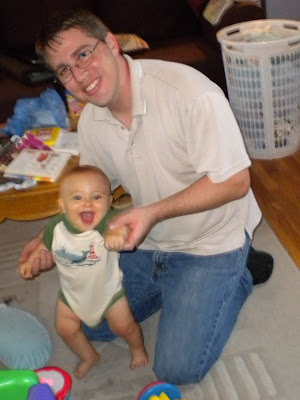