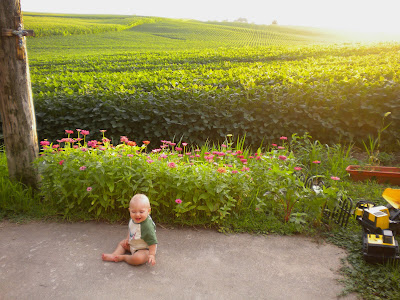 To finish off my summer break, I decided to take Nick and go on a relaxing getaway to visit my friend GardenMom. I've known her since we lived on the same co-ed dorm floor at NIU back in the mid-1990s. Boy, did we have some fun back then. After college, she moved to Iowa and I moved back to the Chicago suburbs. But once or twice a year, we try to visit one another for a mini-vacation.

In this picture, you can see Nick sitting on the edge of the world. At least it looks that way to me. The corn and soybean fields seem to go on and on forever. I thought the hills in this part of Iowa were beautiful and so different from Illinois. GardenMom lives on a dead end street, with beautiful fields behind her. 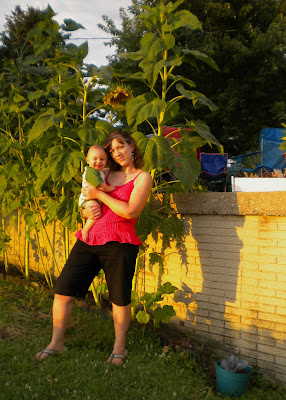 This was my first time making the trip since having Nick. He was very well-behaved (for a baby) during the drive; I found the local NPR affiliate and he went right to sleep. I guess Iowa Public Radio does that to some people. At one point, he did get fussy and I had to fling him (literally) a teething cookie, but the rest of the way he was great. I'm hoping for the same kind of luck on the trip back this Saturday.

Here is GardenMom standing with Nick next to her huge sunflowers. She is an amazing gardener, and her whole yard is filled with vegetables, herbs, and flowers. She has given me much advice on how not to kill my plants through neglect and/or abuse. I've become better at keeping plants outdoors alive, although I have a 100% record of killing indoor plants. We'll see if I can break that record this year; I'm going to buy plants for my classroom next week and try to keep them alive. In the picture below, I'm standing in the middle of her monster garden of joyous vegetables. Nick kept trying to grab them. 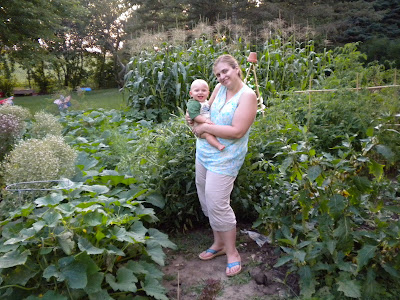 For our first full day in Iowa, we went to the Reiman Gardens at Iowa State University. They were gorgeous, but the highlight of the trip was the Butterfly Gardens. There were so many different kinds fluttering all around. Nick didn't know which way to look. 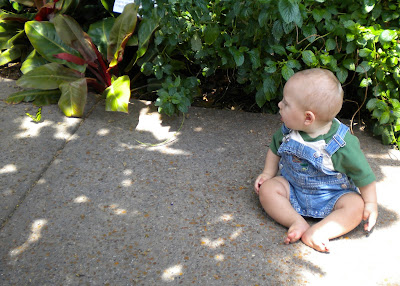 Pardon my poor photography skills, but if you look closely, you can see a gorgeous yellow butterfly sitting on the pavement towards the left side of the picture. Nick was enthralled. He wasn't sure what was going on, but he sure liked it. 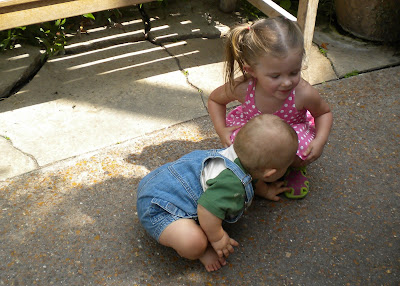 He also had the chance to flirt with this little girl, maybe 2 years old, who wanted to hug him. She kept saying "Baby," and touching his hair and his hands. She patted him on the head like a dog and would have followed our little group if her grandma hadn't pulled her away.

Nick was just as attracted, but to the little girl's shoe. She was wearing Crocs, you see, and he enjoyed poking his fingers through the little holes. 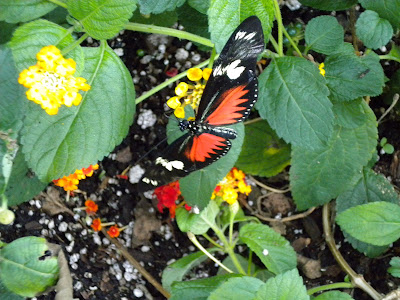 The experience of standing in the butterfly gardens with hundreds of wings fluttering around you is wondrous. I sat on a bench and just watched them fly around for quite awhile; it was incredibly relaxing. I will be thinking of the butterflies next week while I'm sitting in staff meetings and organizing files.

I was at Brookfield Zoo on Tuesday with my dad and stepmom, and we went to the butterfly gardens there, but this structure was more permanent and the plants were larger and more beautiful. I'd recommend the Reiman Gardens to anyone who visits this part of Iowa. 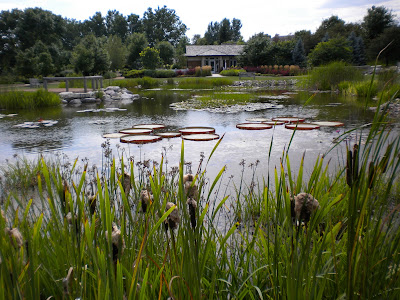 This little pond had frogs, giant dragonflies, and lilypads galore. GardenMom's son had to walk all the way around the pond to make sure he introduced himself to every frog he could find. I don't blame him. At the age of six, I would have done the exact same thing. 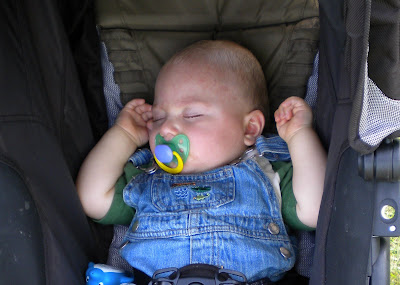 As it was a hot and sunny day, I of course packed sunscreen and dutifully applied it to my son. We've been using it for months now, but I think Nick might have developed an allergy to this baby sunscreen. Almost immediately after application, a rash appeared on his head and spread to his face. He must have rubbed his eyes right after I put sunscreen on his hands, because his eyes got all red and his nose was running.

This picture was taken after the rash had mostly calmed down. You can still see it on his head, though. I am going to try a different sunscreen tomorrow. We're going to the Iowa State Fair, and I'm sure we'll need plenty of sunscreen. That and Pepto Bismol. 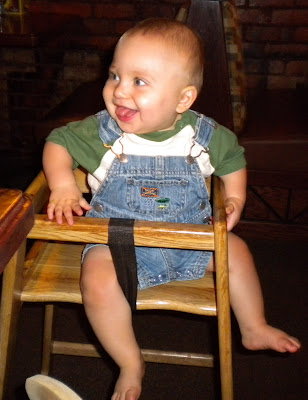