Did I mention that I'm a teacher? So, even when I didn't have children, back to school season got me a little excited. Nick starting preschool. . . well, let's just say I was enthusiastic. I was, in fact, shivering with glee when he got his first homework assignment. Yes, I am a dork.

It is different being the mom instead of the teacher. We wanted Nick to do as much of this project as possible, because I know how weird it is when a kid brings in a project obviously completed by a parent. Nick is three, though, so he obviously couldn't do this project without help.

Greg helped Nick pick out most of the pictures, but Nick only helped a bit with the cutting. Then, later, Nick and I worked on gluing and labeling together. Nick got Elmer's glue everywhere, but he loved working on this project. The teacher said that Nick's "All About Me" collage quilt square could have photographs, drawn pictures, and magazine pictures. Nick chose all three. He also decided (mostly) where to put the pictures on the paper. Here it is--Nick's first homework assignment ever: 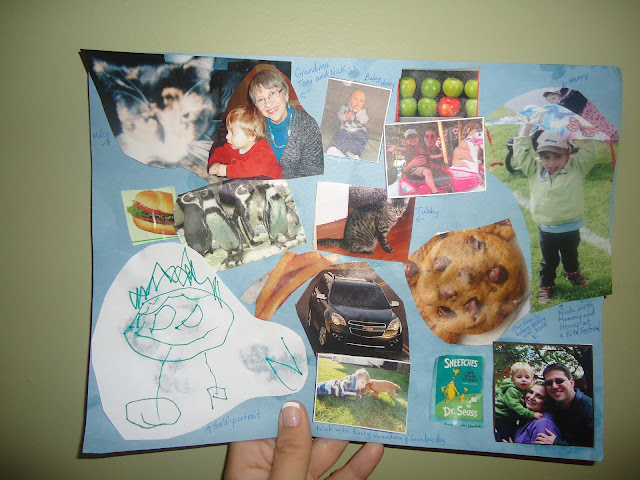 I really like his self-portrait, in the lower left hand corner. I asked him to draw a picture of himself. He wanted me to draw with him. So I drew on one paper and he drew on the other. All of the drawing, including the "N" for Nick, was done independently. He even glued it down himself, which is why there are soggy spots.  Why he has no nose or torso. . . we'll, that's another issue. I seem to remember something from a child development class about kids drawings and how they always start out as a circle with feet. Nick insisted that the feet be wearing "school shoes" though.

We practiced talking about his homework, too. I guess he has to present his paper in school tomorrow. He was able to tell me something about every picture. Hopefully he remembers his reasons tomorrow.
Posted by Melissa E. at 9:24 PM