Yesterday, I wrote about the GR2011 Sustainability Festival in Joliet. Nick and I went just to get out of the house and give Greg some time to get baby stuff done around the house. I'm glad we went, though, because I think Nick learned a lot. He especially liked the hands-on exhibits from the forest preserve. Here, Nick is using a dropper to explore pond water. 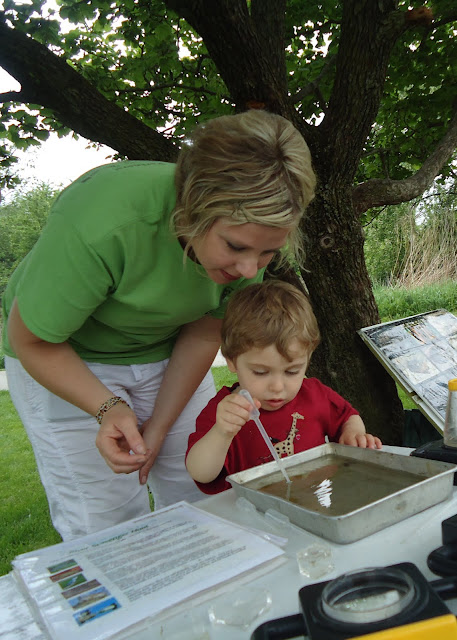 Nick was trying to chase a baby dragonfly swimming in the water. I do believe he paid attention to the pond water more than I've seen him focus on one thing, ever. He was mesmerized. 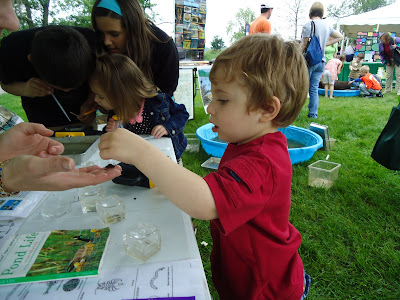 They filled a baby pool with water from the pond behind the library, and let the kids go crazy with little nets and cups with magnifying lenses on top. 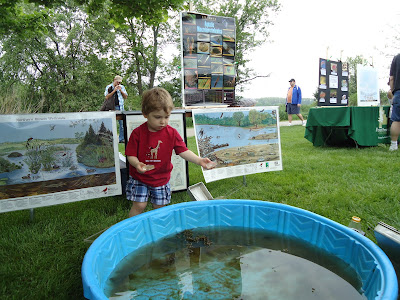 I was impressed that Nick remembered the word "magnifying glass." He has one at home, but that's a pretty hard word for him to say. He loved looking at the tiny squiggling things in the pond water. I think the idea was to show the kids how alive pond water really is, and how clean a pond can be, if it's healthy. 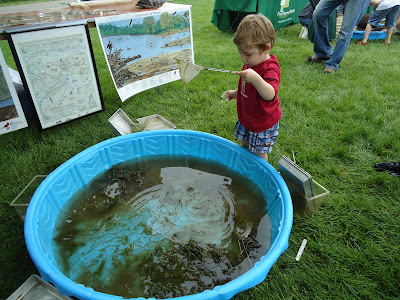 Then he dumped pond water on his shoes. Sigh. Good thing pond water is clean. Ah, well, he learned a lot of ecology, anyway.
Oh, and the reptiles. He loved those. This guy is an iguana. 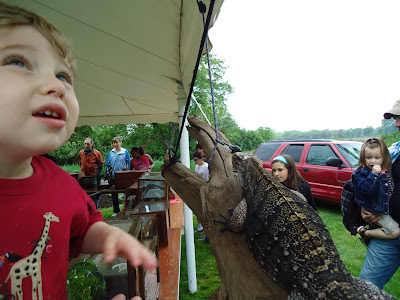 Nick got to pet him, although I didn't quite get a good picture of that. I was busy trying to protect the poor iguana. "That's an iguana?" Nick kept asking. Then, when we left to go see something else, he'd ask again, "Where is the iguana? Want to see that guana!" 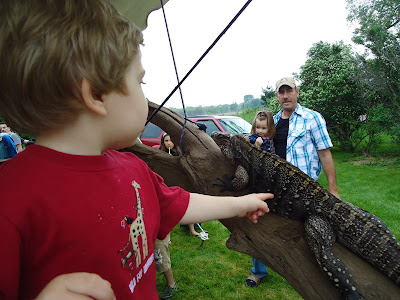 Nick also got to try using a fishing pole. I haven't done this in years, so I cast the line totally wrong. One of the ladies from the forest preserve helped Nick with his turn, and he was really excited. 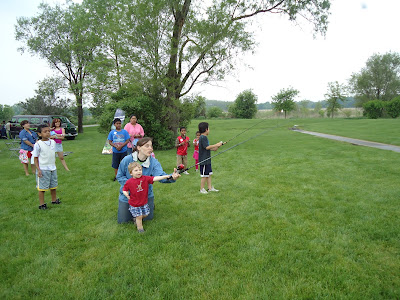 I thought this festival was a great idea. There were organic food samples, information about the local CSA farm (we're thinking of getting a membership), and lots of things for kids to do. Nick is one of those kids who will eat anything, so he adored the samples. I thought it was funny that even at a sustainability festival, all of the food (and most of the samples) were processed foods. They were processed organically and all, but still. I guess it would've been nice to see some more fresh foods.

They gave away free energy saving lightbulbs and I got some great used books at the library sale.

I didn't let Nick explore the compost pile or the giant pile of rotting logs, mostly because it'd started to rain again. Maybe next year.   ; )
Posted by Melissa E. at 8:17 PM