Rain, Rain Go Away: A Gardening Update and a Blueberry Story

This has truly been a crazy spring. I feel like it's been way more rainy and cold than usual, and I've spent hardly any time outside. This weekend, it rained most of the day Saturday and Sunday, so we had to stay inside. Poor Nick was pretty desperate to get outside Sunday evening after being cooped up for two days straight. 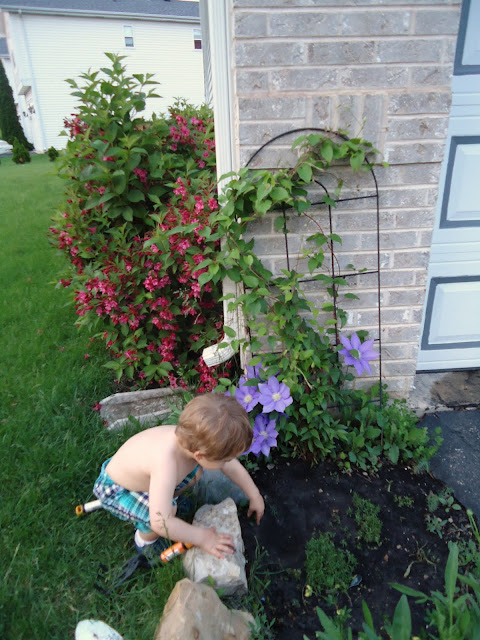 We made him finish dinner before running around, which is why he's shirtless. Nick refuses to wear a bib anymore, so I just stripped him, because we were having soup. I'm not sure what the bushes on the side of my house are called (the ones with the bright pink flowers), but they're certainly blooming despite the lack of sunshine. My clematis actually survived, and the flowers are gorgeous this year. I bought it as a rather sad looking clearance item, and planted it rather hopefully next to a metal thingie to climb. It climbed.  On a side note, the name of this flower always makes me giggle. More than once, I have mispronounced the name as something like "Chlamydia."  Yup, I know. They're not the same thing. Still makes me giggle.   : ) 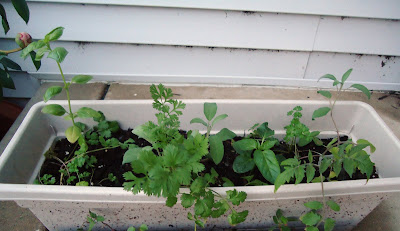 I have most of my herbs and random other plants on my front patio. They were all grown from seeds (Seed Savers Exchange) under my light table. In the box above, I think I see parsley (or cilantro, I can't tell the difference), sage, basil, a tomato, and a pepper plant. Last year, my herbs took over, so I have them planted in pots this year. My front porch gets enough light, I think. Hey, they haven't died yet, so that's a good sign. 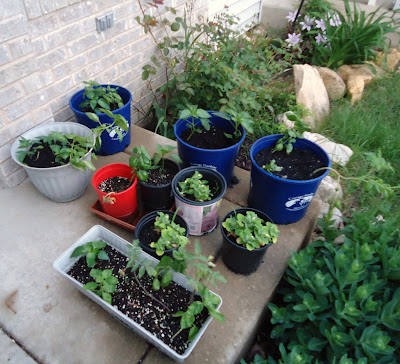 Above you can see the other side of my patio. The peas are overcrowded, I think, but the peppers and tomatoes look decent. 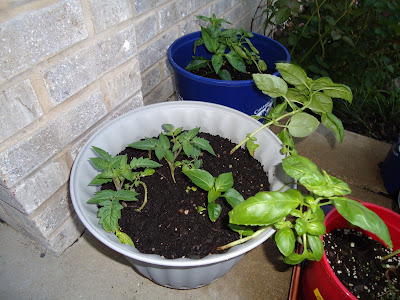 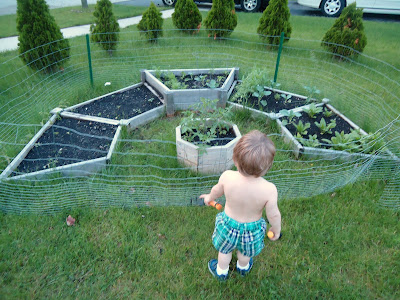 You can see Nick checking out the tomatoes in the octagonal planter. He kept banging that plastic shovel on everything, including my bunny fence. The tomatoes are doing very well, considering. The two boxes on the left have cucumbers, squash, and zucchini, which is why there is so little green. My spinach is in the box to the far right, and it really varies in size. I cannot figure out why some of the spinach plants are so big and some so small. Maybe it has something to do with the weather, because they were planted at exactly the same time. 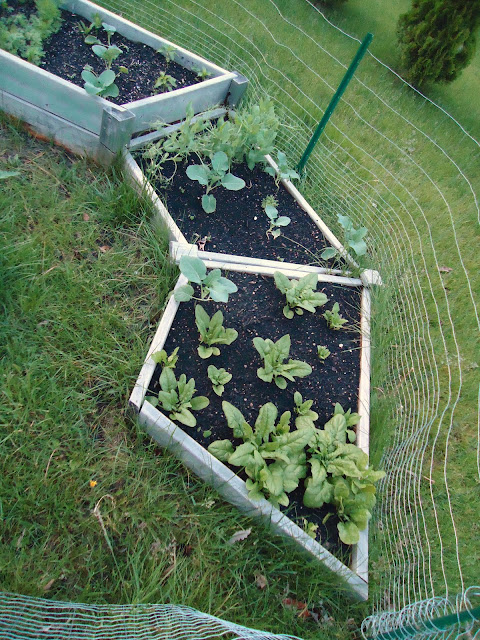 The broccoli and peas are surviving, though I think I may have planted the peas too closely together. Oh, well--you live, you learn. The carrots are in the upper left hand corner and are doing okay. Sigh. At least nothing is outright dead. I feel like that is an accomplishment in itself. 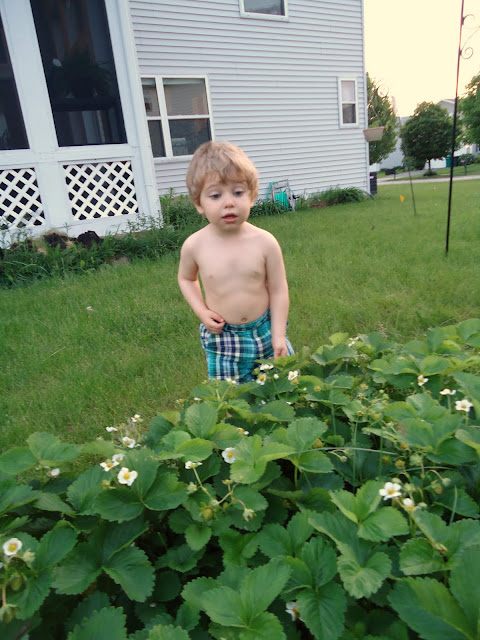 My strawberries seem okay, though I seem to remember more flowers last year. Nick liked the way the baby strawberries felt. He said they were bumpy. I hope we get a good harvest. . . although I may not be capable of going out and picking strawberries myself. I seem to recall that the strawberries were ready for harvest right around the beginning of June. I'll be a little busy in the next few weeks. My birthday is next Sunday, and then my wedding anniversary is on the 8th. Finally, I am going into the hospital first thing on June 9th for my c-section, and I'm not sure how long I will be in the hospital, let alone when I'll feel up to gardening. Hmm.

That brings me to the peonies. Yes, I know that they need to be tied up. We'll try to get on that right away tomorrow. I've been using the peonies as a kind of gauge for when this new baby is coming, and these peonies are getting huge and round, just like me. 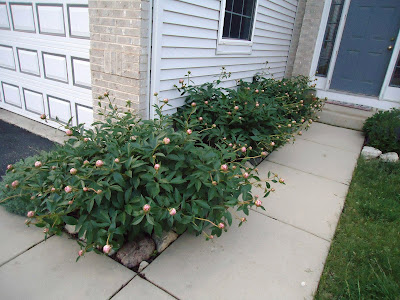 A peony is an odd flower. I don't know that I would choose to plant them, but the three healthy bushes came with the house. They are gorgeous, if you can catch them on the three days of the year when they're blooming. So when the peonies bloom and then promptly get wet and fall over into a nasty pile on the sidewalk that looks like wet tissue paper, I should be giving birth. I probably won't look so hot, either, but I bet I'll be in better shape than the peonies. 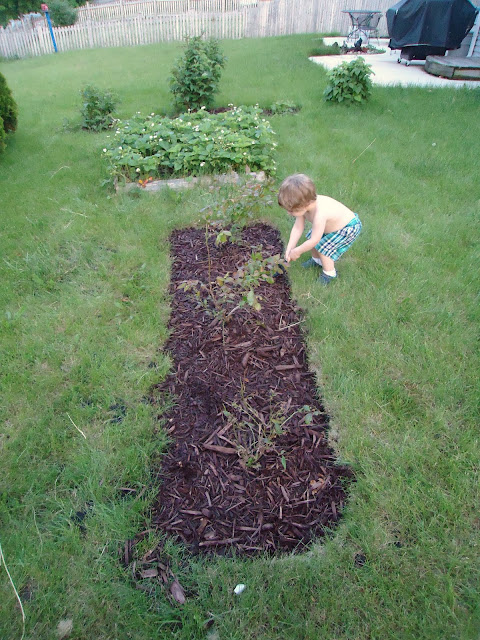 The crowning glory of my garden this year is my three brand new blueberry bushes. They were a gift from my husband and son for Mother's Day, and there's a story behind them. Back in 2007, during the first summer I spent in this house, I bought myself three very expensive blueberry bushes from a nursery ($40 a pop). I did a lot of research about how to combine soil and peat, choose the ideal location, and ensure that the blueberry bushes survive.

I spent four entire days digging deep holes for my bushes. It was really hard, because I was digging through sod and grass, and I'm not terribly strong. I was very proud of those bushes. They actually did pretty well that first year, at least until my husband got to them. . . 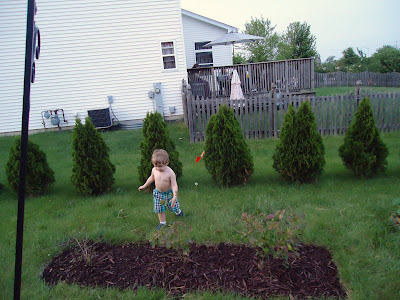 That first fall (2007), Greg asked me one afternoon which plants he could cut down for the winter. I had him trim down the rosebushes, peonies, my autumn joy, and many of the wildflowers. I showed him exactly what to do with all of the plants in the front. But he got carried away. . . .

Greg decided to trim all the plants all the way around the house, without asking me how to do it safely. He trimmed my blueberry bushes right down to the dirt, effectively killing him. I actually cried when I found out. In his defense, he had never done any gardening before. But I had put my blood, sweat, and tears into those stinking bushes, and I never even got to taste one blueberry. (It is normal to have to wait a few years for a real blueberry harvest.) Last year, he bought me a raspberry bush to make up for it, but it was not the same thing at all. 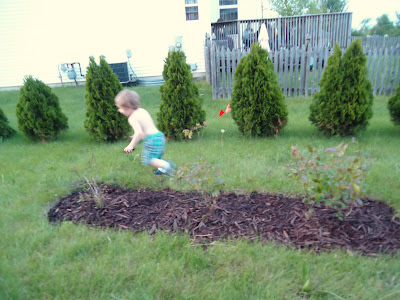 This year, when Greg asked me what I wanted for Mother's Day, I immediately brought up the blueberry situation. Greg bought me three beautiful looking blueberry bushes from Costco, called JULIE to make sure he wouldn't hit any gas or power lines, and then spent several hours digging holes deep and wide enough to plant my new favorite plants. He was not pleased when he realized how much work went into planting them. I then reminded him that I had done the same thing that first summer, and I believe he now knows why I was so devastated when he destroyed those bushes.

This evening, while we were having our dinner out on the porch, one of the neighbor's children threw a ball into our yard, bumping one of the bushes. Greg, who usually is not confrontational about things like this, stood up and shouted, "Hey, cut it out!" at the kids in a rather agressive voice. He now understands my position on blueberry bushes, and both of us will protect the darned things with our lives. Let's just hope they survive.
Posted by Melissa E. at 8:30 AM