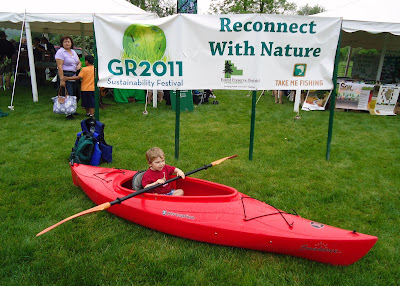 Last Saturday, I decided to take Nick to the GR2011 Sustainability Festival in Joliet. Nick's Grandma Toni had heard about it during a library trip, and it sounded like fun. Also, Greg desperately needed time to get stuff done around the house, and Nick is a terrible distraction. So, despite the threat of rain, Nick and I decided to have a day to ourselves. 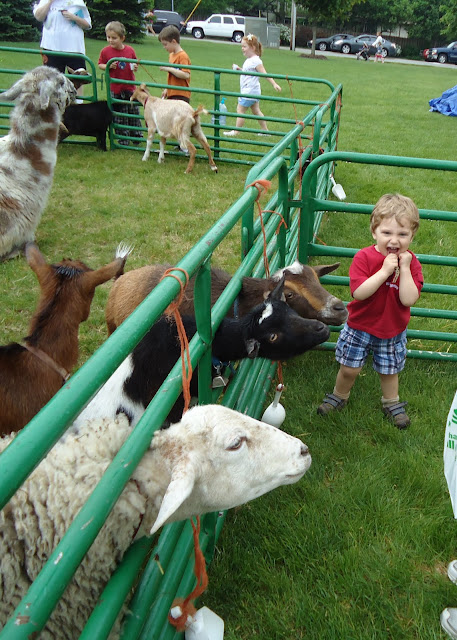 It started out pouring on us as soon as I got Nick strapped into the stroller. We got completely soaked. We ran to the library and dried off for a bit. Then, when the rain stopped, we went to the petting zoo.


Nick loved the animals, but he had a hard time staying still long enough to pet them. He got so excited, he'd run around in circles and scream with joy. "Sheep!" he shouted as he ran, full-force towards the animal. I don't blame them for running in the other direction. 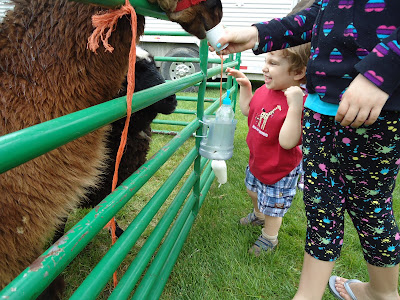 
Nick had the funniest reaction to the animals. He would scrunch up his nose and screech hysterically. I wonder if it was their earthy odor?


Either way, he had fun. The animals didn't seem too perturbed, though I kinda felt bad for them. It must really be no fun to be a petting zoo animal. 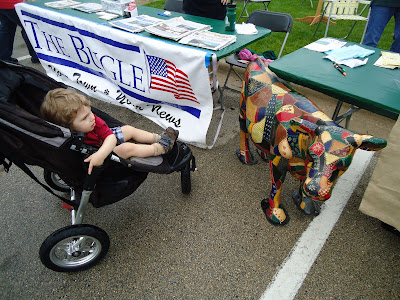 Nick did not know what to think of this patchwork cow. He was intimidated by it and kept looking at it sideways. It was at a table taking donations towards giving families in third world countries livestock. (Yes, we donated before messing with the cow statue.) My son is seldom intimidated by anything, but this cow bugged him for some reason.

He got over it when he saw the kayak. "Boat!" he declared loudly. I corrected him, and then let him take his turn sitting in the kayak and holding the paddle. "I go on the water," he insisted. That, however, was not an option. So he tried to paddle his way to the river. No luck with that one. 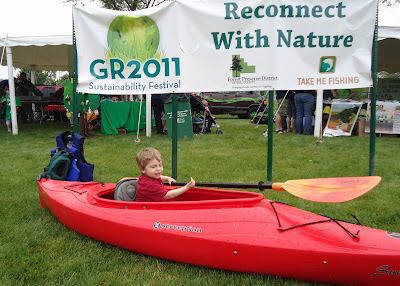 More to come tomorrow.
Posted by Melissa E. at 9:18 AM