A Trip to the Mall, Sans Stroller

Last week I had to go to the mall, but my husband had forgotten to put the stroller back in my trunk. It was in his car, where it served no useful purpose. I usually don't mind taking Nick to the mall, but I was very nervous to go without a stroller. It's getting harder to carry Nick now that he weighs nearly 30 pounds and I am 26 weeks pregnant! 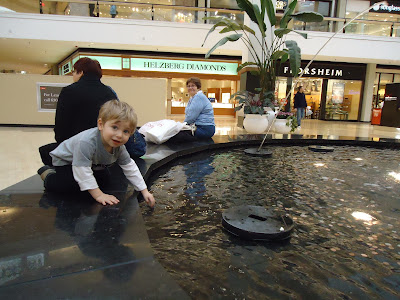 ﻿As we walked through the mall, Nick was mesmerized by the carousel, the indoor playground, and especially by the cars that move and make noise. "Mommy, I go on cars?!" Nick asked excitedly. Now, I know all about the attention span of a two-year old, and his general ability to wait. I had no intention of leaving the mall without doing at least one fun thing for Nick. But first I had something important to do.
"Nick, first shopping, then cars. First shopping, then cars." Nick considered this thoughtfully for a moment, and then, miraculously, he said. "Okay mommy. First shopping, then cars." No tantrum, not even a whimper. I sighed in relief and headed off to the pinkest of stores. Pregnant women, you see, can indeed grow a cup size over the weekend, and this can be quite uncomfortable with ill-fitting undergarments.
Nick seemed mesmerized by all of the pinkness and lace. As the saleslady came up to help (and measure) me, Nick said to her, "First shopping, then I go cars!" She laughed, and Nick proceeded to tell every single person in the store that he would get to ride on a car when I was done shopping. In the meantime, Nick waited patiently while I spent time in the fitting room. Indeed, he even tried on some of the merchandise himself. If I hadn't been otherwise occupied, I'd have taken pictures, because what is cuter than a two-year-old boy modeling a pink lacy bra?
Anyway, I stopped to buy perfume on the way out, and I figured Nick would start getting impatient. But he just took all of the perfume boxes and stacked them like blocks on the shelf. Then, after I made my purchases, Nick asked, "Cars now, Mommy?"
I decided to push it. "One more store, Nick. One more store, then cars." It worked! Nick walked into the maternity store with me and held my hand for another ten minutes while I looked around. I was so proud of him. He can be so naughty sometimes, but on this day he behaved exceptionally well. He saw this fountain on the way out, and I let him watch the water for awhile. 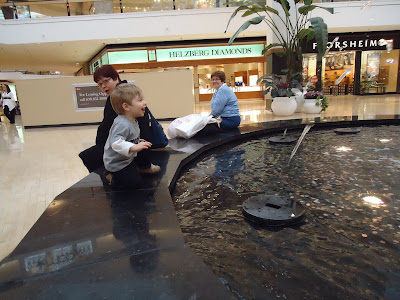 Then, as promised, it was on to the cars. "All done shopping, now cars." This is what I told Nicholas, and his face lit up as he saw them. I let him pick two cars to ride on, and he would've stayed for hours if I'd have let him. 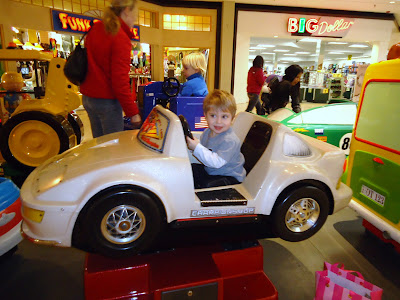 Nick was even understanding when I didn't have enough quarters for the car with the video screen. He just sighed and picked another vehicle. I guess he must've been in an accommodating mood that day. 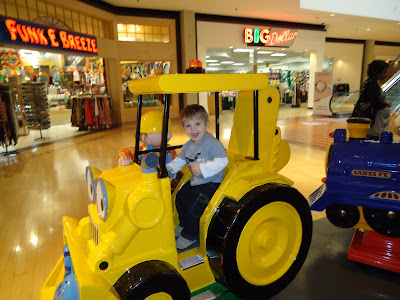 When I'd run out of money, I told Nick he could play for a few minutes.  I gave him a five minute warning when I was ready to leave. 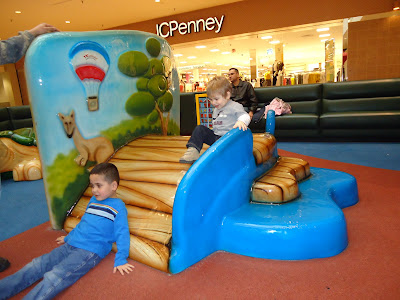 When it was time to go, Nick simply took my hand and we walked out the door. Simple as that. I am under no illusions that this is normal behavior, but I sure was grateful for it that day.
Let's hope I'm able to have more days out with Nick like this one. No temper tantrums, no drama. Just shopping, and then fun.
Posted by Melissa E. at 3:00 PM