I don't have time to make it on weekdays, but Nick and I love to have old fashioned oatmeal on the weekends. This morning he was asking me for some before I'd even finished my first cup of coffee. "You make oatmeal. Want to eat oatmeal. With cinnamon!" 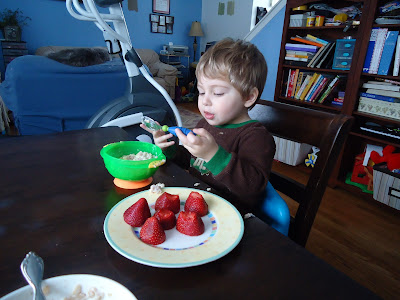 Nick had already had breakfast, about an hour before. My husband gets up with him and lets me sleep in, which is nice. So this meal was his second breakfast. We had our oatmeal with strawberries. Please notice how Nick took a bite from the tip of all the strawberries. It made me giggle. That must be the best part. 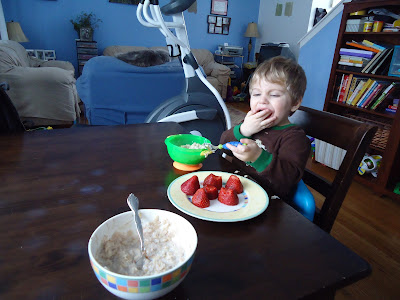 During the week, I use the packets of oatmeal, which are okay. But they're nothing like real oatmeal made on the stove. I use milk instead of water, and the old fashioned regular oatmeal with the big pieces. It takes 5-10 minutes of constant stirring to get the consistency just right, but it's definitely worth the weight. This oatmeal is heartier and the milk gives it protein. I add fancy Vietnamese cinnamon from Penzey's Spices. It's way nicer than grocery store cinnamon.
Nick can eat an entire serving by himself. Oh, and he eventually ate four of the strawberries. He just likes to eat the tips first, for some reason.
Oatmeal is a pretty healthy meal, but it always makes me feel relaxed. Maybe that's because I only make it on leisurely weekend days.
Posted by Melissa E. at 7:16 PM