Last week, on one of those random warm days, Nick and I decided that it was time to plant some of our seeds. I'm obviously not going to be as gung ho about my planting as I was last year, but I'm still hoping for some decent produce. My weeding, however, might be significantly reduced, seeing as it takes me a sold minute to get down to the ground. Let's not talk about how long it takes my pregnant body to get up. 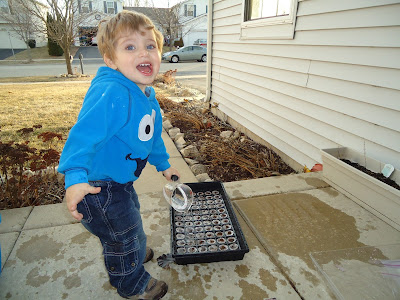 Our first step was hydrating the soil pellets in the little greenhouse. Nick enjoyed helping with that, although he spilled as much water on the floor as he got onto the soil pellets. Kids always love when the pellets start to grow--it looks like magic to them.  I bought one of the greenhouses that had 75 little pellets. That should be enough seeds to get me started. I still had plenty of seeds left over from last year, when I ordered from the Seed Saver's Exchange. 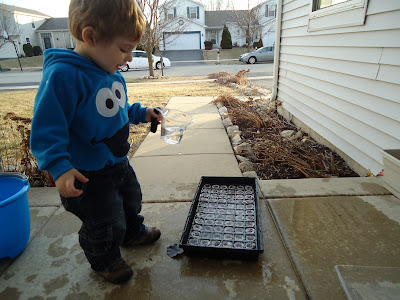 I think Nick is just excited to be outside again. I am too, to tell you the truth. It's interesting how we don't go outside at all for four or five months out of the year, and then suddenly it's nice enough to sit on the porch. We did notice something fishy on our front porch, though. . . 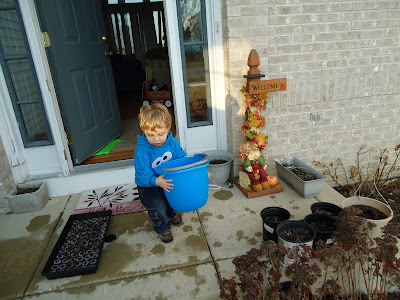 Yup, that "Welcome" pole with fall decorations and the scarecrow has been there since September. My mother-in-law got that for us a few years back, and this year we forgot to bring it in. At one point it was covered in snow. I guess it's time to bring it in, since it is now officially SPRING. 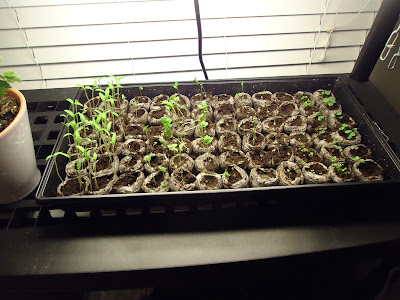 Here are the seeds tonight, about a week later. They've pretty much all sprouted and are doing well under the lights. I just bought another ten kinds of seeds from the Seed Saver's Exchange, so we'll see if I'm too late to plant those as well, once they arrive in the mail.

Oh, what did I plant? Is that the question? Sigh. Nick kept trying to eat the seeds. He called the bigger ones "beans" and it was all I could do to keep them away from him. I wasn't paying attention while I was planting, so I couldn't tell you what is what.

I'm never very good at remembering what I planted where. I remember I had the same problem last year. I know that I did 2 rows of tomatoes and peppers and at least 1 row of everything else, including lots of herbs. I think I planted broccoli, too. Nick was distracting me as I was planting, and I lost the paper where I had written down which seeds are which. Oh well. I'll figure it out eventually. I'm just proud of myself for remembering to plant the seeds!
Posted by Melissa E. at 10:30 PM