Pilates for a Pipsqueak?

Despite still being pretty sick today, I decided to try a pilates workout. With my two-year-old. Yup. He loved it. I am extremely sore. Here is our story. 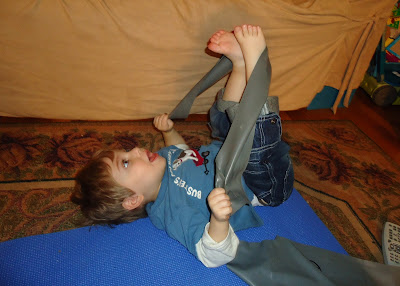 Today I decided to try doing my Pilates Bodyband DVD workout. This is a workout I've done lots of times before, but not really at all since I've been pregnant. I wanted to try at least modified versions of the exercises to build core strength and keep stretching out my muscles, which tend to be tight. Nick insisted on doing the exercises with me, so I found a little band for him and we worked out together. The workout took about twice as long as it would've if I'd done it alone, but Nick had a good time and undoubtedly got some exercise. 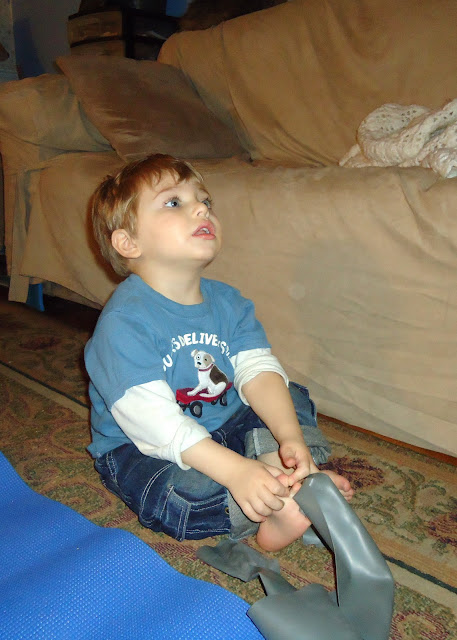 I'm actually extremely proud of myself for finishing a workout today at all. I am recovering from a vile illness that has practically knocked me out this week. It started last week with allergies, and now I have a sinus infection, bronchitis, and an asthma flare up. I was in bed at the same time as Nick Monday through Wednesday, because I felt like I was going to keel over at any moment. I couldn't stay home from work because (1.) it's ISAT week (state high-stakes testing), and (2.) I don't have many sick days left, and I have no choice but to save them up in case this baby comes early. Anyhow, a workout was not a possibility until today. I'm still not feeling terrific, but I knew if I didn't get back into stretching, I'd ruin all of the progress I made with my physical therapy. (See the bottom of this post if you'd like a PT update.) My two inhalers, antibiotic, and nasal spray (total cost=$135) have finally started to kick it, and I decided not to let being sick be an excuse. At least not today. 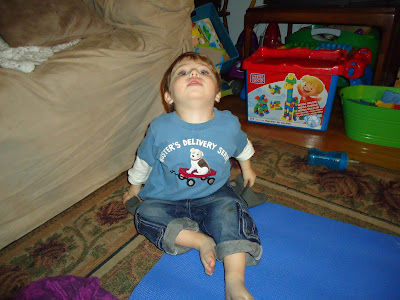 I had to do a lot of hand over hand to show him how to use the bodyband. His favorite moves were the ones where he put the band on his cute little toes. Nick actually started shouting at one point, "Mommy, you put it back on my toes! I exercise with you!" The band had come off and he couldn't figure out how to do it himself. He loved stretching his toes up by his head. 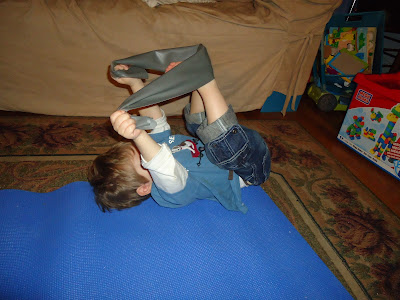 So if you'd ever like to try pilates with a two-year-old, I'd suggest bringing patience and a remote control with a pause button on it. You'll have to stop every few minutes to help the kid get into position and fix his band. Most of the two-year-old's exercises will not be done with proper form, but he will enjoy them.

How did I do with pilates at 25 weeks pregnant? Pretty well, actually. Before all of my physical therapy, I had to do the exercises with the old lady. You know, the modified version of each stretch. Well, I still need to do that, but some of the stretches are much easier. I also skipped a bunch of the moves where you have to be on your tummy. That just doesn't work for me right now. I was able to do some of the modified abdominal work, and I think I'm actually stronger now than I was before I was pregnant. That felt really good. 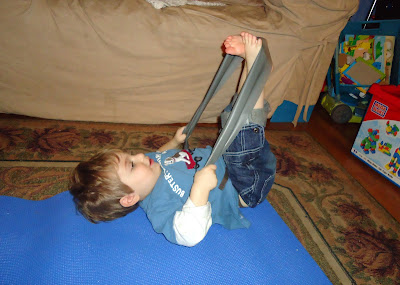 Last week, I had my last physical therapy session. My progress over the last three months has been steady but strong, and in my final evaluation, my physical therapist said that I had crossed into the normal range for most of the stretches. (The lowest end of normal, but still. . . ) For example, most people can stretch each foot so that it makes a 90 degree angle with the leg, and then stretch about ten degrees further in than that. I could only get to around 100 degrees, meaning that my foot wouldn't even make a right angle.

During one of my first PT sessions, my therapist called over several other PTs to see how bad my feet and legs were. My arches and hamstrings were incredibly tight and couldn't be stretched. Now, after all of this physical therapy, I can get past 90 degrees just a little bit, putting my feet into the normal range. I can also do regular leg lifts without assistance, and my core strength has increased significantly. I will never be a flexible gal, and the low end of normal is the best I can hope for, but I feel pretty proud of myself. I need to check with the podiatrist for sure, but chances are I won't have to have leg surgery to lengthen my hamstrings. I guess all of my hard work paid off. The giant, heavy orthotics I wear in my shoes are helping with the foot pain, which has decreased quite a bit despite the fact that I'm six months pregnant.

This could all go back to how it was before, though, if I don't keep stretching the muscles. That's why I'm going to try to do a modified pilates workout at least two or three times a week, in addition to keeping up with the 5-10 minutes of stretching I've been doing every day since I started PT. I've never been very consistent with exercise, but hopefully I can keep this up so I don't have to have surgery. So far, so good.
Posted by Melissa E. at 9:43 PM