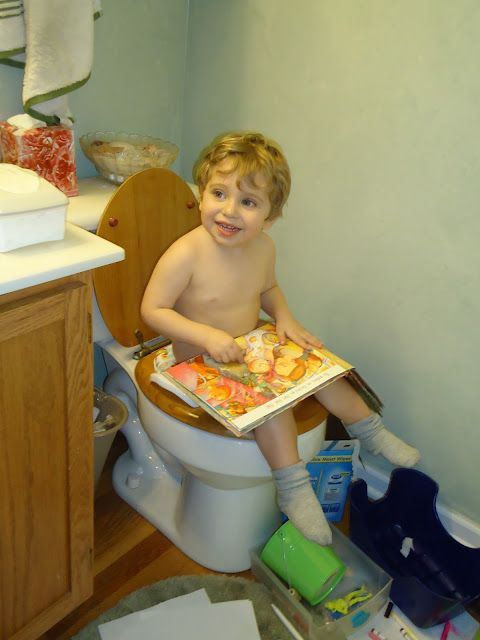 Should I show this one to his girlfriend someday?﻿ I thought it was pretty cute, anyway. Warning: This post contains information about potty training. If this isn't your thing, no problem. You don't have to read it.  But I have enough people who wanted to know how it goes that I decided to just make this into a post.
So here's the potty training update: 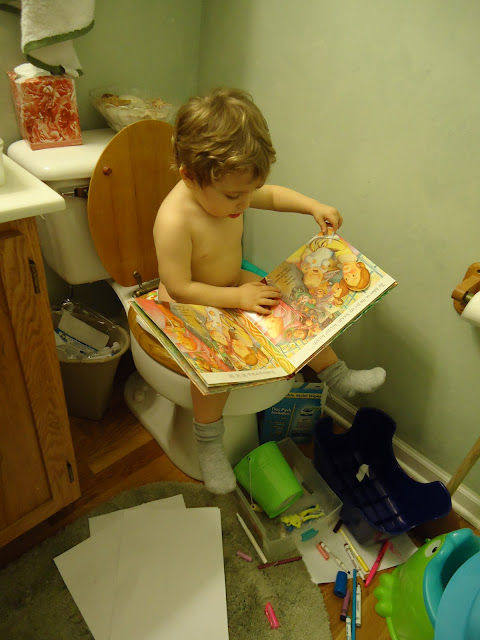 Greg put Nick into his new, expensive man panties Saturday morning, and spent a few hours getting Nick to go on the potty. He sat and sat but nothing happened. Then, when Greg was in the shower, I put Nick on the potty and we started singing, "The Wheels on the Bus." For some reason, that seemed to do it, and Nick peed in the potty. He seemed so very surprised, but was thrilled with the toy he got (a wind-up helicopter).

I guess Greg didn't have any more success that day.  I left around noon and was downtown all day Saturday. Nick went through lots of 5 ply man panties, all to no avail. He woke up this morning completely soaked. Nick sat on the potty several times with no luck. You'll notice from the pictures that we have lots of interesting items in the bathroom: books, markers, paper, crayons, and a dry erase board. That's to keep him entertained enough to sit there for awhile without getting mad. Finally, Greg got him to pee on the potty, and gave him some silly putty as a prize. Nick was thrilled, but then immediately pooped in his pants. 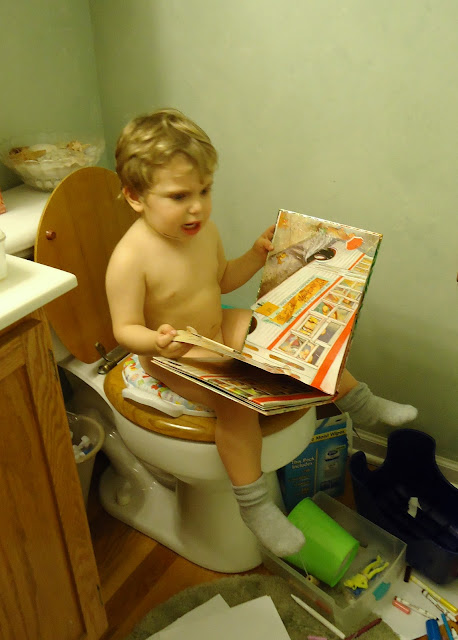 By the way, we learned two important lessons here today. First of all, silly putty makes quite a mess when a toddler pulls it into strings and flings it all around the living room. Also, supposedly "waterproof" five-ply underwear doesn't hold a good sized toddler BM. Nick had two of those today, and one leaked so badly that it got up to his hair. He has had three baths this weekend.
Today we had to go to a birthday party, but we are stubborn and didn't want to go back to the diapers, even just for a few hours. It was a party for a two-year-old, so Nick was able to sit on the potty a few times, though he never had any success. Instead he wet through his pants very badly while sitting on Greg's lap, ruining both pairs of pants. I teased Greg because of the location of the wet spot on his jeans. It looked as though Greg was the one who'd wet his pants. 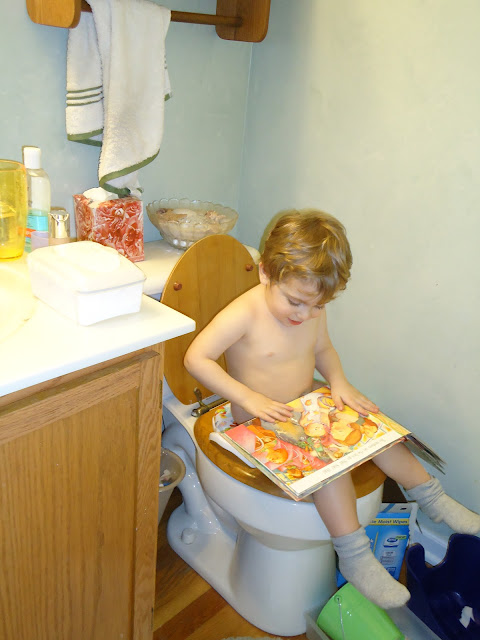 Late this afternoon, I took Nick to the Babies 'R Us to choose some new training paraphernalia. I let him pick out Elmo man panties, plastic pants, and a new Elmo potty seat. No luck since then, but Nick sat on the potty willingly at least four times this evening.
Here are the numbers:
Days: 2
Total Potty Trips: 14
Successful Potty Trips: 2
Toys Earned: Also 2
Random Items Thrown Into Potty: 4, not including tons of toilet paper (1 hair band, 1 orange crayon, and the tag from my new maternity shirt)
Number of Times Toilet Flushed (Empty): 23
Wet/Dirty Pairs of Man Panties: 10
Fits Thrown: 7

Outfits Worn: 5
Baths: 3
Amount Spent on Additional Potty Paraphernalia: $76
Additional Pairs of Man Panties Purchased: 9
Additional Pairs of Plastic Pants Purchased: 9
Loads of Laundry: 2
We are not giving up. Greg and I decided that being consistent is the most important thing, so we're keeping Nick in training pants until he's trained. At least we're going to try, especially since our babysitter and Nick's Grandma Toni are willing to help us with the process during the week.
The only compromise that we made was to keep Nick in diapers at night. I feel very hypocritical expecting Nick to make it through the night without peeing, because I get up at least three times a night lately. Also, since Nick started crawling out of his crib, we've child-locked his door from the inside.
From what I've read, this process can take a really long time if parents keep switching back and forth. I'd rather see it through and persevere, even if it takes more patience than either Greg or I have right now. I bought three different kinds of training pant options to try, but I'm not going to go with pull-ups. From my experience, I think that those don't allow kids to feel when they're wet. I want Nick to care when he's soaked. He's already becoming more aware of the feeling. Nick is 28 months old now, and its time.
Wish us luck. We're going to need it over the next few. . . weeks? months?
Posted by Melissa E. at 9:32 PM