Today is our 2nd Wedding Anniversary. It's hard to believe that it's already been two years. It seems like it was just yesterday that Greg and I were nervously standing at the altar, dressed in expensive and incredibly uncomfortable clothing, praying that the rain would hold off until the ceremony was over. (It did, but just barely.) Two years later, I spent much of the evening cleaning up the spaghetti that Nick threw five feet across the kitchen. 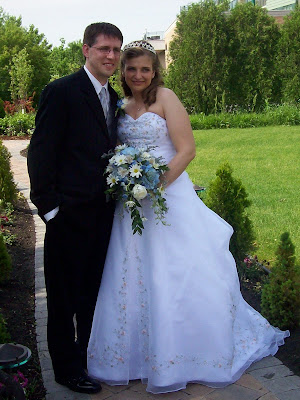 So what are we going to do for our anniversary? Nothing, tonight. We decided to hold off on celebrating until Greg takes his vacation in a few weeks. I believe he's planning a nice trip downtown, and a stay in a hotel. For tonight, I cleaned up the spaghetti projectiles, and Greg did the dishes. I will say that I was dressed more comfortably than I was two years ago. . . I spent the evening in my comfy pajamas. Then, when it was time for The Daily Show, we shared a plate of homemade s'mores that Greg made in the microwave. I suppose any dessert is a celebration.  : )  The s'mores were pretty good, but not so good as our delicious chocolate ganache wedding cake. 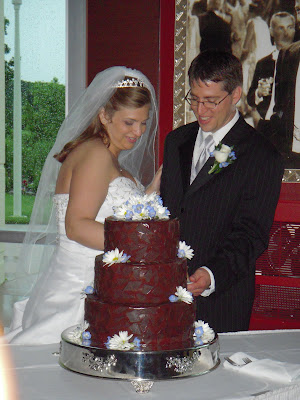 Actually, that cake was one of the best parts of the wedding. If we could afford it, I think we would celebrate each anniversary with a cake like that. Not that I didn't like the s'mores.
Posted by Melissa E. at 10:20 PM