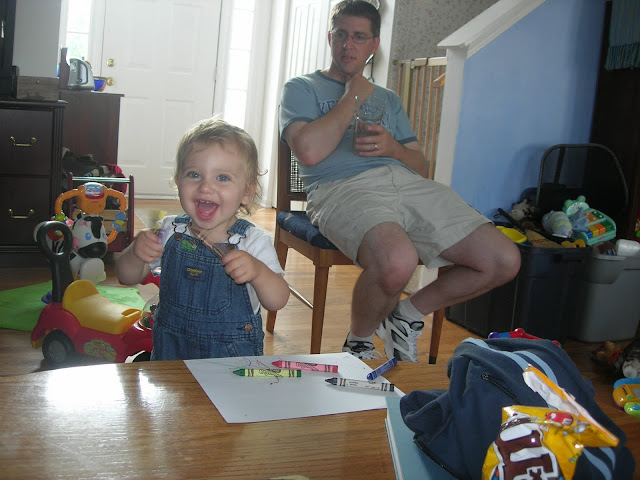 Lately, Nick has gotten the hang of drawing. For a long while there, he'd just chew on the crayons and then throw them at me. But now he'll actually scribble on the paper. Then he bites off a pieces and chucks the rest at me. But hey, at least he's progressing. This picture is from last weekend, but Nick did a lot more drawing today when we went out to dinner. 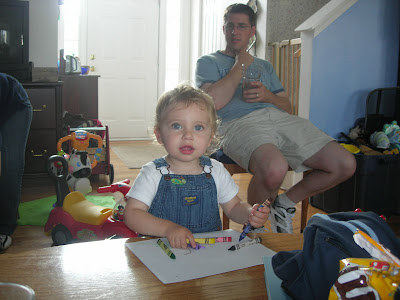 For my birthday today, Greg took me (and Nick) out to a fancy seafood place in Oakbrook. It's called McCormick and Schmick's, and the food was excellent. Nick's favorite part was the fried calamari, and I think he ate more than I did. I had a lobster tail and the "Grilled Filet Medallions with Wild Mushroom Demi." My mouth was so happy. Greg had the "Braised Wild Halibut & Salmon in a Light Saffron-Truffle Broth." For a birthday dinner, I couldn't have asked for more. I had a delicious Riesling and a chocolate mousse for dessert, and I will be begging to go back to this restaurant.

Nick was a huge flirt in the restaurant. He was playing peekaboo with a lady at the table next to us, and he kept grinning and making faces at a couple across the way. Lately he's also been into clapping for himself, and for other people. I do believe my little boy presented a lot of entertainment for the other diners. When we were having our dessert, Nick starting flirting with a different lady, and she was totally flirting back. She'd smile and cock her head to the side, and he'd do the same and giggle. Then, when she got up to leave, he waved and said "Bye-Bye!" I don't know if they saw.


While in the restaurant, Nick colored on the kid's menu. He also ate the tip of the yellow crayon. The box says they're non-toxic, though, so I'm sure he'll be okay. (Perhaps his diaper will be interesting to change tomorrow, however. . . )

It's funny how he's been coloring with more intent lately, as if he suddenly "gets" why crayons are cool. He looks with awe at the marks he made. I bet he gets that from his daddy. Greg loves to draw and paint; in fact, in just over five years, he's developed into a very decent painter. Check out this painting that Greg did of the Seine River in Paris, on our honeymoon. I wonder if Nick is taking after him. (Although I should hope that Greg doesn't eat his paints! Those aren't nontoxic.) 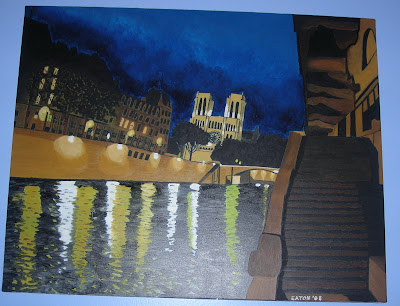 Here is Nick's masterpiece. He colored it for me this morning for his birthday and his daddy wrote the words. I think Greg must've also done the smiley faces and the little heart. But the bulk of the work was done by an 18-month-old. I was impressed by how much color he got on the page without throwing the crayons. What do you think? Do I have a budding artist on my hands? He sure doesn't get that from me! 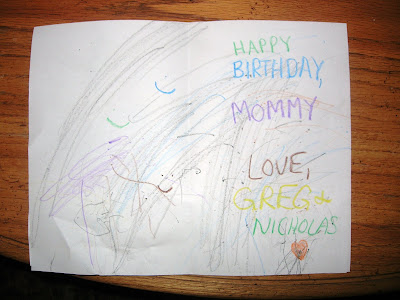