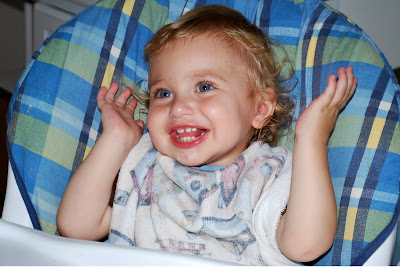 Okay, the party is next. I'm going to tell you about how my family celebrates birthdays, and I even looked up some information on birthday traditions. See, I'm a teacher, and I have an uncontrollable urge to research.

Anyway, Nick got to sit on the laps of both birthday girls during the whole candle/cake/singing thing. He's still trying to figure out the concept of blowing out the candles. Here, you can see Nick sitting with his Great-Grandma Dorothy, (GG) during the singing. I think he looks somewhat bewildered as to why the cake is on fire. I suppose many of our customs may seem weird to him. You know, it is kind of weird that we put lit candles on a cake. Happy Birthday GG! 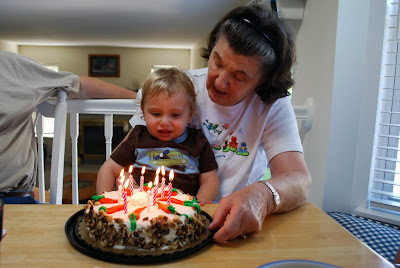 I actually looked it up, because I was curious. It seems that the practice of putting candles on cakes comes from the Ancient Greeks, who used to bring cakes to the temple for the goddess of the moon. I guess they'd put the candles on so that the cake would glow, just as the moon does. Then, later, Germans put one candle on a cake in honor of the light of life. I do believe Nick was just wondering why nobody cared that the cake was on fire. He sure looks like he's trying to figure the whole thing out. Happy Birthday Auntie Mandy! 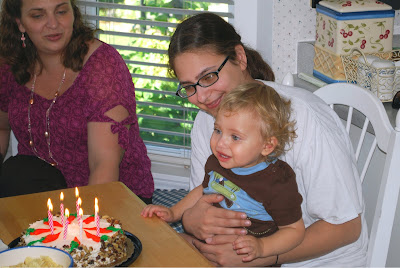 Above you can see Nick wondering why we set the cake on fire a second time. We do something strange during birthdays, on my mother's side of the family. When we sing the birthday song, we sing 3 verses of the song. We've done this as long as I can remember, and I never knew why. In fact, I can remember being surprised when I'd go to my friends' birthday parties and they'd only sing one verse. When new people come to birthday parties in my family, it always confuses them, because they think the song is over, and then we keep singing.

I had to research where the other verses came from, and I think I've figured it out. "May the Dear Lord Bless You," comes from a Catholic version of the Happy Birthday song, which makes sense since my family has Catholic roots. "May You Live A Hundred Years" is a translation from the Polish version of the song, "Sto Lat." That makes sense, too, since we come from Polish roots.

Now Nick, he doesn't care about any of this. At least not yet. But you know what he does care about? 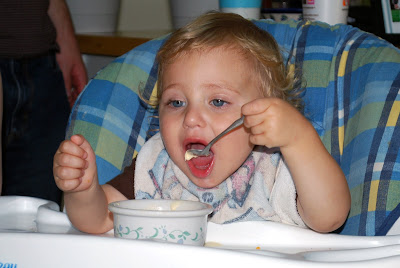 Yup. Ice cream. He cares a whole lot about ice cream. Nick is doing much better with a spoon, too, although he makes quite a mess while eating it. Yes, that is a towel wrapped around his neck. 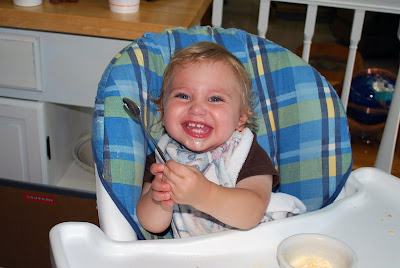 I suppose I'll have to show the puppy pictures tomorrow for Wordless Wednesday. My grandmother just bought this adorable puppy named Lucy, and she weighs only 2 pounds. She is a Yorkie, and the cutest doggie ever. When I saw her, I said, "That's not a dog, it's a hamster!" Seriously, I've actually seen rats larger than this dog, when I worked in Cicero. But the dog was definitely cuter. I'll show lots of pictures tomorrow. Oh, and photo credits go to my sister, Amanda Wiatr.
Posted by Melissa E. at 10:42 PM