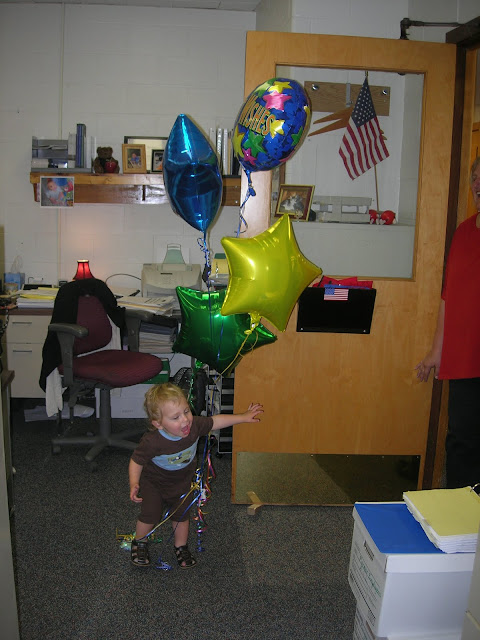 Without fail, every time Nick sees a balloon, he gets incredibly excited. "Boon!" he exclaims loudly, pointing at his favorite object in the whole world. He does this for every single balloon, even if we're in the grocery store and there are upwards of 20 balloons. A few times I've even bought him one, figuring that it was cheaper than my latte, and probably gave him just as much pleasure. I do believe Nick gets more enjoyment out of one balloon that I do from anything (even cheesecake). 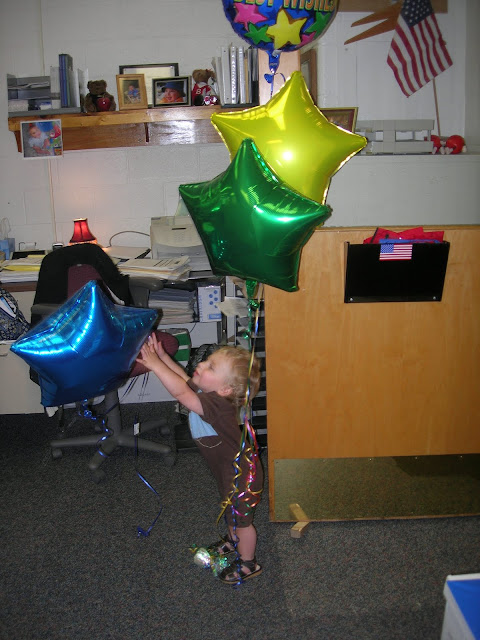 These particular balloons are from my mother-in-law's retirement party. We went to see her at work last week, so she could show Nick off to all of her co-workers. It was an exciting visit for all of the co-workers, who stood outside their offices laughing at Nick's squeaky shoes and watching him chase a ball down the hallway. Nick loved the attention--he wasn't a bit shy about being the center of attention.
Grandma Toni gave Nick the blue balloon to take home, and man, was he pleased with it. It's been nearly a week, and every time he comes downstairs or into the house, he sees that balloon and shouts "Boon!" as if he's never seen it before. He drags it around the living room, shrieking with joy as it follows him around.
I'm adjusting pretty well to my summer routine so far. I forget every year how nice it is to be off for the summer. Then June comes along, and I'm always shocked at how wonderful it is. Nick, I think, misses his friends at the babysitter's house. He gets very animated when he sees another child, and I can tell he wishes he had someone to play with other than just me and Greg. I need to take him to the library for storytime next week, so he can get some playtime with other little boys and girls. Although he's satisfied enough just going to the grocery store or out to lunch--Nick just isn't into hanging around the house.
One of the things I love about summer, besides all of the time off, is all the fresh fruit. My strawberry patch is still producing tons of fruit, and I've been using all the berries. In the summers I like to make frozen smoothies, and the picture below is of my favorite blend--Strawberry-Pineapple. Smoothies are wonderful because they taste like dessert but they're good for you. (At least the way I make them, they are.) I don't always measure precisely, but here's my recipe. 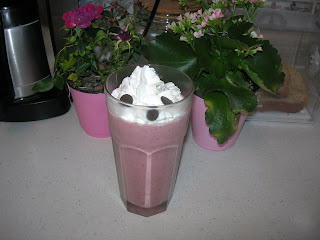 First, add in:
1 cup of either light activia vanilla yogurt or greek yogurt (any flavor)
2 T ground flaxseed
1t cinnamon
2 scoops of whey protein powder (you can add more, too)

Then, add in the fruit until the blender is around 3/4 of the way full. I used frozen pineapples and fresh strawberries from my garden. Sometimes I add a banana, too. I add in 2/3 of a cup of skim milk and then add more if necessary, using the ice crush option on my blender until it's all mixed. If it doesn't taste sweet enough, I've used either honey or a couple of packets of Splenda, although usually the fruit is plenty sweet enough. One of my tricks is to take fruit that is very ripe and freeze it, that way I don't have to throw any out. This is especially good for bananas.

I always top smoothies with real whipped cream. If I have them, I add either sprinkles or dark chocolate chips. For me, balancing a healthy breakfast with decadent things like whipped cream and chocolate chips makes it that much more enjoyable.
Posted by Melissa E. at 8:50 PM