A Night out for Valentine's Day 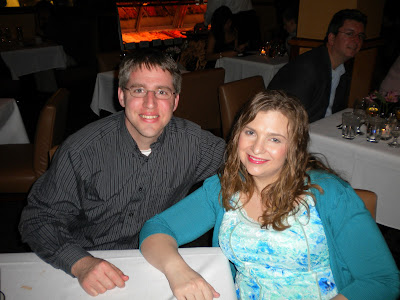 We celebrated our Valentine's Day on Saturday, because that's when we could get a babysitter. I was impressed: Greg brought me roses and took me out to a really nice restaurant. We went to Catch 35 in Naperville, but because it was Valentine's Day we had a 4:30 reservation. Actually, the timing was really great, because they weren't too crowded and we could linger over our food. Oh, and the food. . . it was amazing, and not too expensive, either. We had calamari, which was divine, and Greg had their salmon, which he said was excellent. I had crab bisque and the Valentine's Day weekend special of lobster and filet with a mushroom sauce over blue cheese risotto. (My mouth is watering as I remember.) But my favorite thing was their key lime pie. It was a true key lime pie, not green and fakey like at some places. My only regret is that Greg and I split dessert. I wish I'd have ordered my own to take home. 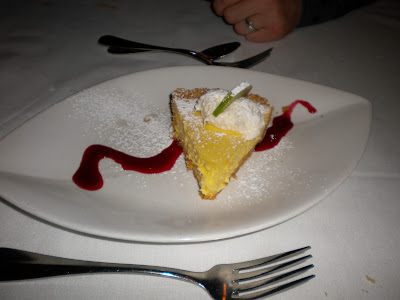 Going out early had its advantages, too. Not only did we get to linger over our food in a fairly uncrowded room, we also didn't have to wait to be seated, and we were awake to truly enjoy our food. Last year we had 8 p.m. reservations at a place up in Rosemont, and they didn't seat us until 9:30 because they were so crowded.

After our wonderful dinner, we went out to the movies, which we haven't done in months. Picking a movie to see is always a challenge, but we finally decided on the Sherlock Holmes movie. (Robert Downey, Jr. and Jude Law, both looking sexy? Count me in!) I liked what they did with it, actually. I loved the Sherlock Holmes books when I was in high school, and some people criticized this movie because they took it in a different direction. I didn't mind, though. . . I thought it was well done.

We both enjoyed the movie, but it's getting weird how much action there is in movies nowadays. I'm not necessarily talking about chase scenes and whatnot. Rather, the movement doesn't stop, almost as if the filmmakers think we all have ADD and can't concentrate on one thing for more than a few seconds. I'm afraid all movies are going to be like that from now on. I have a very good attention span, but there's not much chance to use it in movies nowadays. 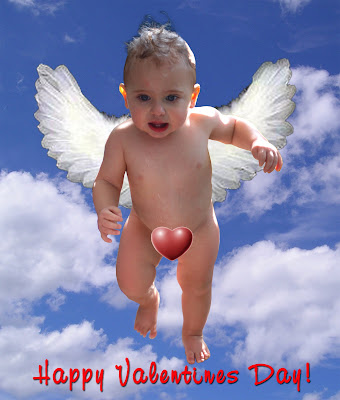 My sister made this little cupid from a picture of Nick she took a few weeks ago. I thought it was appropriate for Valentine's Day. Oh, and yes, I'm aware that she's missing an apostrophe. I still think it's adorable. Especially his hair--it gets all curly and cute when he comes out of the tub.
Posted by Melissa E. at 9:22 PM