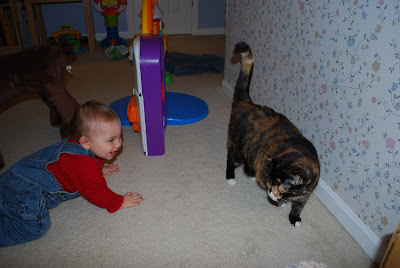 This is Molly. She is a 9-year old mixed-breed cat, and she has a thing for Nick. Our other cats are afraid of him, but she actively seeks him out. The feeling is mutual, as you can see above. 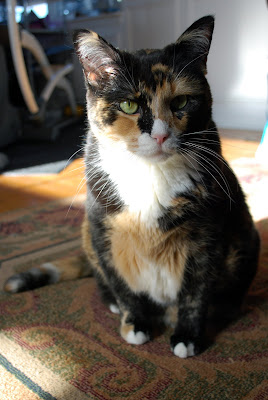 I got Molly in 2001 when she was a tiny little thing. She's always been the most vocal cat, and her personality is more human than cat. Molly makes all kinds of noises, and is especially attached to men, although she tolerates me. With four males in the house (two human and two feline), Molly and I are the only girls around. She genuinely believes she is in charge, and it is seldom that anyone argues with that. Our two other cats know that she's the one in charge, and they accept her dominance. 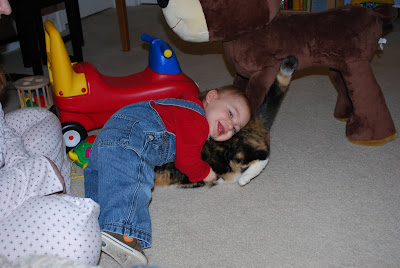 When Nicholas starts crying, Molly will go to him and yowl at us as if to say, "Do something about it!" I'm not sure if she does this out of love or because she can't stand the sound of his crying. She'll try to comfort him, too, by nuzzling him with her chin. A couple of days ago she sat under his high chair and he threw her pieces of roast beef. I was thinking maybe he didn't like roast beef, but then I fed it to him today and he liked it just fine. Babies are fickle, I guess.
Nick likes to show his affection for Molly with big hugs. Unfortunately, he often tackles her to the ground with these hugs. Other cats would run away, but Molly stands her ground and refuses to leave, even after having her ears pulled or her fur yanked. Molly's patience has increased in recent months, and she mostly just growls until Greg or I come and peel him off of her. It's not surprising that one of his first words is "Kitty." When I gave Nick a bath this morning, Molly sat on the toilet lid and watched, intrigued as to why someone would want to be sitting in all that water.

There was lots of time for cat-human interaction this weekend. Today we stayed home and relaxed, and the cats got plenty of exercise while running from Nick. It must be something about winter, but I never feel like doing much around this time of year. I'd rather just stay inside and dream of warmer days.
Posted by Melissa E. at 9:00 PM