Today was Greg's 36th Birthday. It was a great day. We started out by having brunch at Meson Sabika this morning with Greg's dad and stepmom. It's funny how families have different birthday traditions. In Greg's family, there are cards but no actual presents, just a very nice meal. I like that tradition, especially when it involves tapas. Ever since I stayed in Spain for a month back in 2004, I've jumped at any chance to eat my favorite foods, like gambas al ajillo, and calamari a ala plancha, and champinones. (shrimp with garlic, grilled calamari, and stuffed mushrooms). We ate until we burst, and everything was delicious. Nick especially loved the fresh fruit, the shrimp, and the rice pudding. Oh, and he got a real kick out of the cup they gave him with the straw. 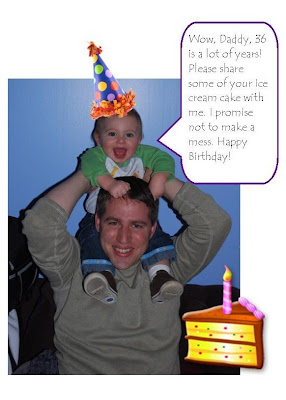 Ever since Nick was born, I've been using pictures of him to make my own cards for people. Basically, I take a picture of Nick and stick a hat and some props on him. It only takes a few minutes, and my family and friends really seem to appreciate a personalized card with a special message from Nick. There will come a point when he's old enough to forbid me to use his pictures in such a way. Not yet, though.  :) 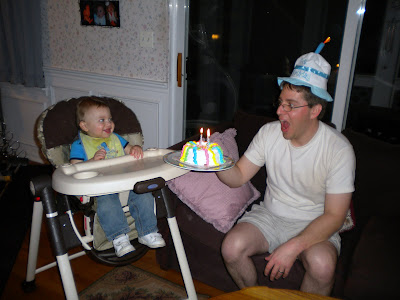 Nick and I got Greg some new jeans, several very nice bottles of wine (A nice Pinot Noir and a few bottles of Australian Chardonnay), a new watch, and an ice cream cake. Can you see the excitement on both of their faces when they saw the ice cream cake? 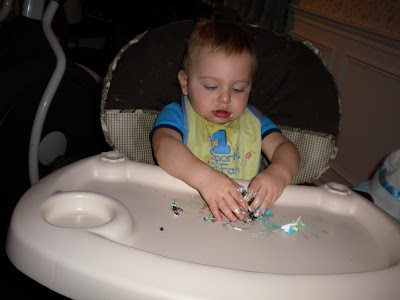 I think Greg ended up with a pretty good birthday weekend. Friday, we went out with his mom and sister to Hugo's Frog Bar in Naperville. The food was superb, but they didn't seat us until 7:30 for a 7 pm reservation. Also, they didn't have a changing table. Of course, Nick had a dirty diaper. That's just Murphy's Law. Nick's Aunt Sarah and I were going to walk down to the Border's to change him, but Greg grabbed Nick and said he'd take care of it. I'm not sure what kind of miracle he finagled, but Nick got a clean diaper. 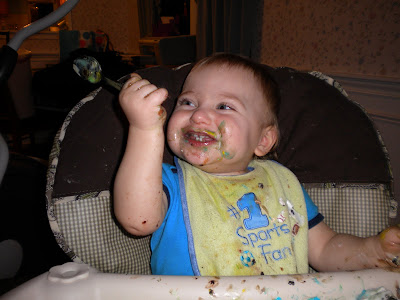 I think the funniest part of the day was when Nick got to demolish the ice cream cake. It was only a tiny piece, but boy, did he make a mess. Then daddy gave Nick a nice bubble bath, to get the chocolate out of his ears. Nice way to end a birthday celebration. 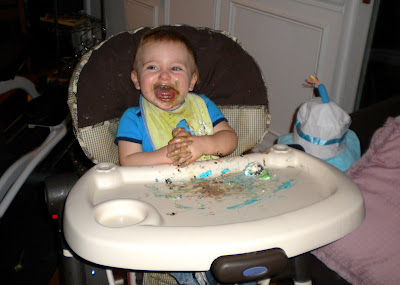