He cracks himself up! 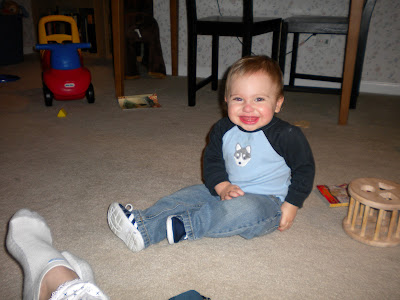 Nick was in a weird mood yesterday and today, alternating between giggly joy and unadulterated rage. On Sunday, he missed his morning nap entirely (refused to sleep), and had a short afternoon nap, so I'm pretty sure that's the reason he was on an emotional roller coaster. He would be laughing and shrieking with delight, and then, for no apparant reason, his happiness would evaporate and become extreme anger. Soon he would be on the floor, throwing an all-out temper tantrum. It was like having two completely different babies. . . that or a roommate with PMS. 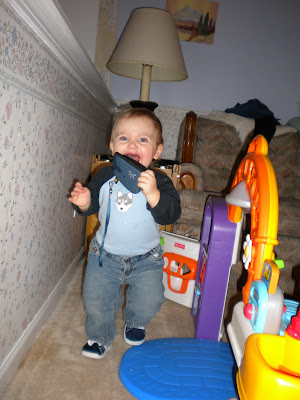 Notice the wild, excited gleam in his eyes. He was very happy to have stolen the camera case from me. Right after I snapped this picture, he picked up a plastic cooking pan from his play stove and conked me over the head with it. I must've done something to make him angry. "No hitting," I told him firmly and took the pan away. Then I got this look: 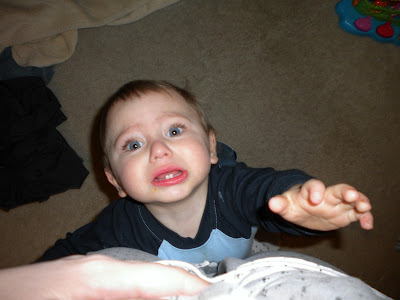 Yeah, he was a roller coaster of moods, all right. We're torn between giving him the binky (at which point he instantly becomes an angel) and trying to break him of the binky habit, at least during non-sleeping hours. The screams are making us lean towards the binky. 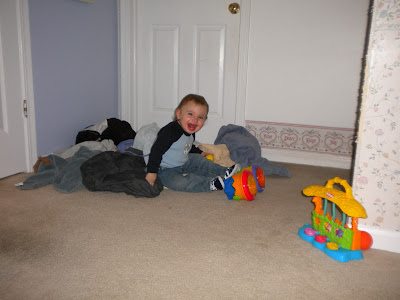 I took the video below during one of his happy times, when he was playing with his shape sorter and talking to me. I can't figure out how to edit video yet, so I had to download the whole thing (45 seconds). The adorable giggles come in about halfway through.
If nothing else, Nick was a great distraction this weekend. I didn't have the best week, but a couple of hours of playing with a baby is good for the soul. Even if he did have multiple personalities.
Posted by Melissa E. at 2:54 PM