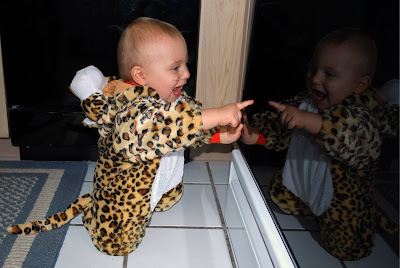 Lately Nick has been cruising around holding on to everything in sight. He especially loved my mom's dishwasher. We have one at home, but it is white and doesn't show a reflection like this one. He was really excited about seeing himself. 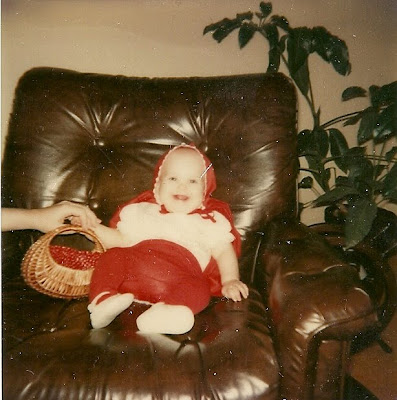 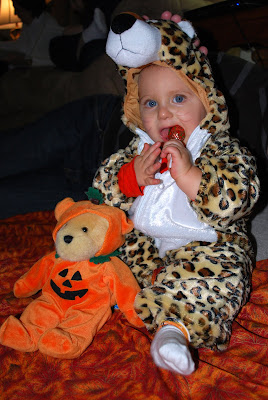 The first picture is me at my first Halloween, and the second is Nick at his first Halloween. I do see some resemblance, but boy, I was a chunky baby. I think I was nearly 10 pounds at birth, and I obviously wasn't missing any meals. I think I was only about four or five months old when this picture was taken. How did THAT baby end up with a son this cute? I have no idea. 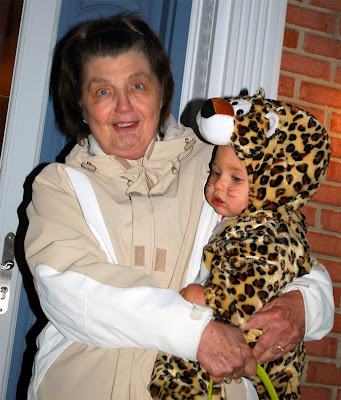 This is the first of the Halloween Posse Pictures. Everyone got to take a turn going up to doors with Nick and Trick-or-Treating. Nick didn't mind being passed off. First was my grandmother, and then my mom. Candy all around! 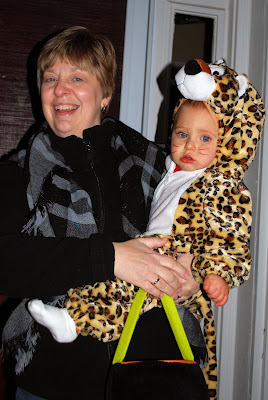 Nick's grandpa enjoyed holding him and walking up to the doors, where some folks commented, "All of you are going along for this one baby?" Yup. It was quite a crowd: me plus my mom, stepdad, grandmother, sister, and husband. Oh, plus the actual trick-or-treater: Nick. 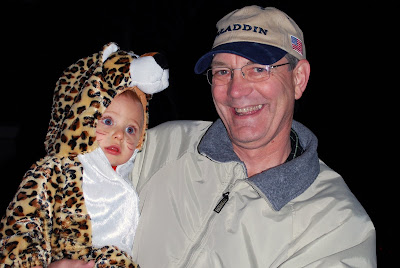 Finally, here's the photographer: my sister, Mandy. She uses Nick as her model, and she takes pictures that are 100% better than mine. In most of her pictures, the lighting and color work, he is smiling, nothing is blurry, and no heads are cut off. 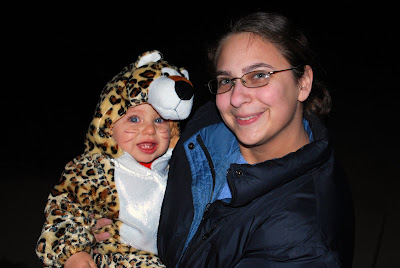 I had a few requests to post all the Halloween pictures, so I'm just going to put them all in this post. Poor Nick ended up wearing his costume quite a bit on Saturday, then again on Sunday for his other Grandma (Greg's Mom). He took it all in stride. 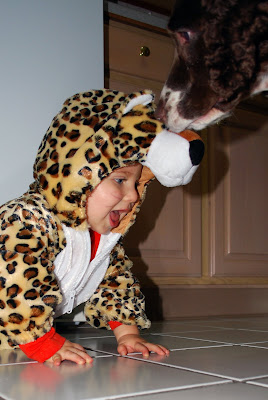 Tigger always likes to play with Nick, and I think the costume only helped. Usually Tigger goes to lick Nick on the face, and he gets made and crawls away. The puffy cat head helped as a buffer. 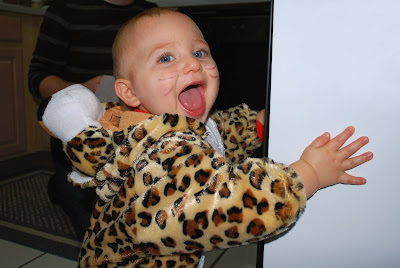 Tonight Nick was having a lot of trouble calming down. We think it's the adjustment to no more daylight savings time. One great thing about our boy is that he is generally out like a light at 8 p.m. He makes the sign for sleep and wants to go down. But since the time change, we're feeding him later (according to his body clock) and he gets overtired. He was screaming and clawing and buzzing. He wouldn't even take his binky. Greg finally laid him down in his bed at exactly 8, and he was out like a light. 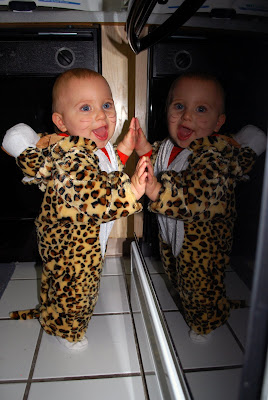