A First Birthday Party for Nicholas! 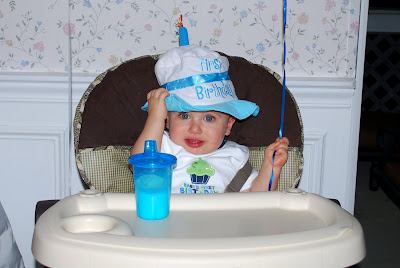 Nick's first birthday party was a success, all things considered. I always get nervous planning these things; I think I worry too much about what other people think. My sister took all of these great photographs, and I'm so glad she did. My pictures never turn out this well. I know that my son enjoyed his first birthday party, despite being sick. Tylenol, hugs, and presents (in conjunction) can work wonders. In the above photo you can see him grasping a balloon with one hand and trying to tear off his birthday hat with the other. Planning a birthday party is no small feat; I have a tiny house, so I had to put limits on the number of guests. Then there were invitations and decorations and cake and candles and, whoops, the baby grabbed the lighter. I can't take my eye off of the boy for even one second. I like this picture because he's holding the lighter so protectively. 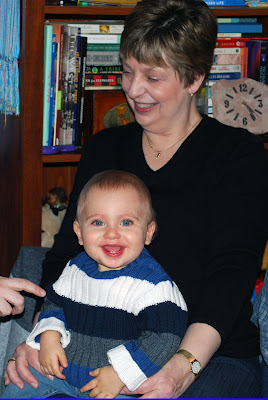 Nick was lucky enough to have three grandmas and two grandpas at his party. (Greg's dad and stepmom celebrated with us last weekend.) So needless to say, he had a turn in every lap. Can you tell that this child was running a fever over 102 degrees at one point? Grandma Linda held him and cheered him right up. They are always saying that "Nick is so well behaved." Yup. Sure. When other people are around. The gremlin in him only comes out when Greg and I are alone with him. Like today, when he whined (under his binky) for ninety minutes straight. But of course tomorrow, when it's Thanksgiving, I'm sure he'll be a perfect angel. Sigh. Back to the party. . . 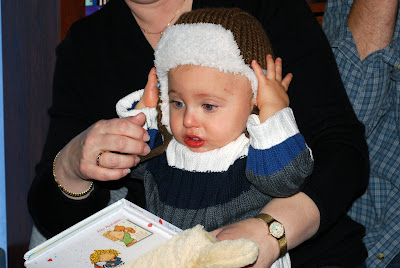 The adorable hat and book were a gift from Nick's Aunt Sarah, and he immediately tried to rip the hat off. He'll change his mind when it is ten below and his little ears are cold--the hat is not only the cutest thing ever, it is also inordinately soft and has a strap so it won't fall off.
It was great how many people came to wish Nick happy birthday. We ended up with 15 guests, not included Greg and I. I'm glad I bought so many appetizer and drinks. Nick received a ton of wonderful presents, but the real gift was getting to see his family members. We don't get to see some of them often, and Nicholas always loves to have company. 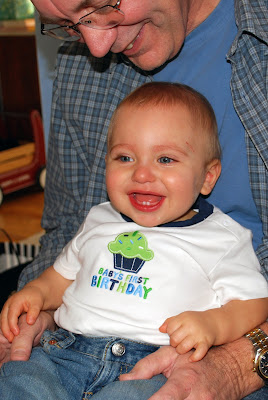 Here's Nick sitting on his Grandpa Ray's lap. Sitting on laps occupied much of Nick's afternoon. This is a baby used to being the center of attention. That's what happens whne you're the first grandchild. He soon destroyed that 1st birthday onesie with blue frosting. . . 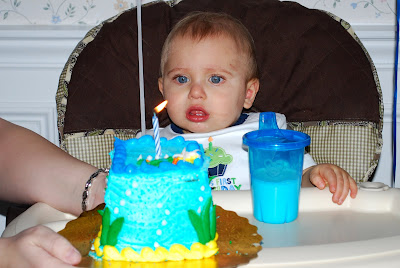 Nick was a little perturbed and unsure when the lights went out and we all started singing so loudly. On my mother's side of the family, we sing all 3 verses of "Happy Birthday." Not sure why. That is a long time for a little man to have to wait. Then, he was crabby and didn't want to try the cake. But I put a tiny bit on my finger, and Nick's daddy tasted some to show how good it was. Then. . . 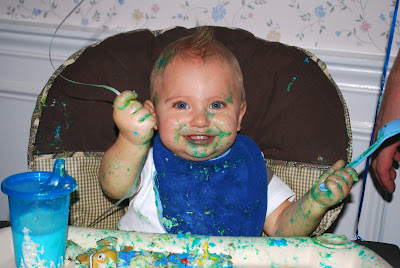 Yup. Frosting from head to toe. This is the face of an elated baby on a sugar high. With a balloon. Check out the blue frosting in his hair. Someone spiked it into a mohawk. Had to give him a bath after this experience. But isn't that what a first birthday is for? 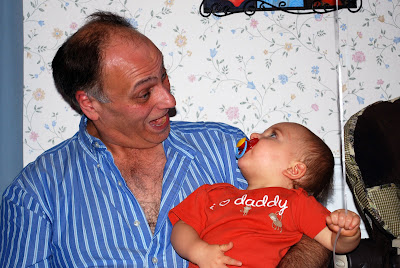 Nick and his Grandpa Mike (my dad) were making faces at one another and playing with one of the balloons. Then Grandma Patty brought in his present. . . 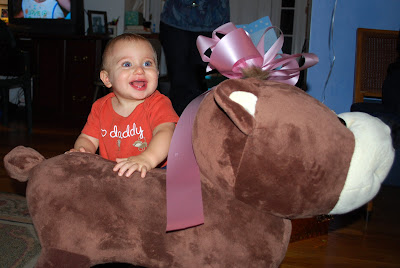 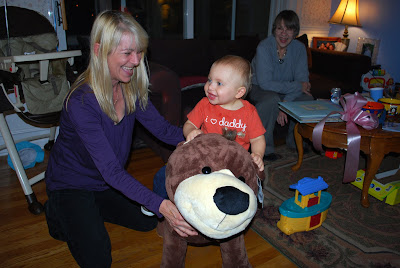 See the joy on his face? Can you imagine a neater present for a toddler? It is a life size, ride on bear. He's soft and huggable and sturdy enough for either riding or using to stand. I would've loved one when I was a little girl. Maybe it'll stop him from wanting to sit on the cats. Or not.

Perhaps the best part of having a party was the fact that it forced us to rearrange furniture, arrange Nick's room, and give a thorough cleaning to the whole house. If we didn't have company, when would we ever do that? I know Nick won't remember this first party, but he sure enjoyed it while it lasted. Plus, he's been enjoying the leftover cake all this week.
Posted by Melissa E. at 8:33 PM