Leftover Cake is Just as Yummy! 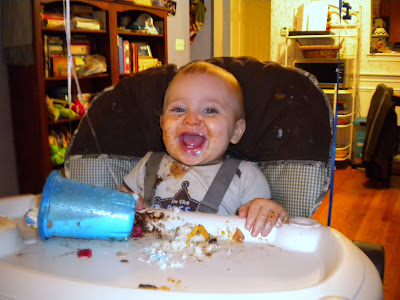 Today Nick experienced the joys of the day after a birthday party: playing with streamers, balloons and new toys, and eating leftover cake. This particular picture shows his Sunday night dinner, where he ate a mixture of tomato, chicken sausage, and black beans, along with raspberries, milk, and whipped cream cake. 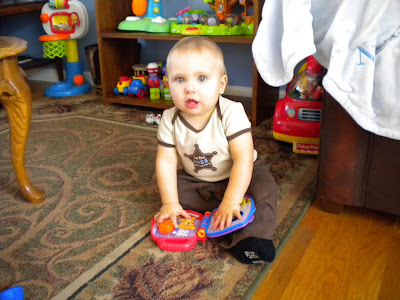 Yesterday was Nick's first birthday party, and I think it went rather well. He made a cute and adorable mess with blue whipped cream frosting, and he got lots of awesome presents. I will post about it once my sister sends the pictures. Above you can see him playing with an interactive book that was one of his presents. It sings and reads the story to him. Nick kept pushing the button and turning the pages. .

The only problem was that Nick woke up yesterday from his nap with a 102.3 degree fever. He had his shots Wednesday, and I'm thinking that might have caused his fever. I hope that's all it is. He is still running fevers, just not that high. Poor guy--his first birthday party and he has a fever for it. I think Nick still had a good time, though. His favorite parts were the balloons and the presents. I spent a little more than planned, but isn't that how it goes with kids?

One First Birthday Party=
=$72 in decorations, birthday hat, and balloons
=$140 in appetizers and drinks
=$50 for a Finding Nemo whipped cream cake
=$7 for the "1st Birthday"onesie
=7 hours of cleaning

But the joy of treating your little boy to a day of company, balloons, and fun?= Priceless 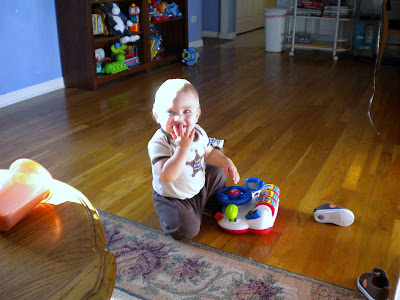 This is the face Nick made when he pressed the siren button on his driving toy. Once the button is pressed, a siren goes off and a voice says, "Slow down, little fella." This made me laugh, and Nick laughed, too.
Posted by Melissa E. at 8:22 PM