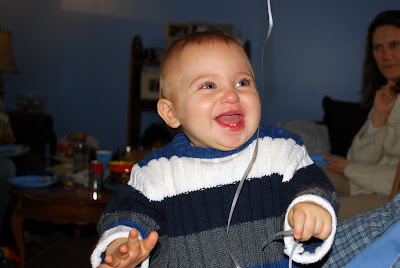 I will post the rest of the 1st birthday party pictures tomorrow--this is just a preview. However, this is not the happy face we dealt with today. Nick was definitely Mr. Crabby Pants this afternoon and evening. Greg said that he was a bear all day. He has a cough but no fever; I'm wondering if that's what has his diaper in a twist. I guess he didn't have an afternoon nap either.

Greg and I took Nick to Meson Sabika for dinner, and he was really naughty. He kept screaming and crying with no provocation. Everything was setting him off. He acted hungry and ate calamari and mushrooms and beef and such, but kept throwing things on the floor. He'd reach for my hot plate of mushrooms, then yell at the top of his lungs when I said no and pulled it away. From flinging silverware to screaming and shreiking, Nick made it impossible to enjoy our meal. I suppose we are spoiled because he's usually pretty good. Thank goodness only two ladies were seated in our section, and they were drinking plenty of sangria, so hopefully they weren't too pissed. Sangria makes everything better; if I hadn't been driving, I would've wanted a pitcher myself.

We left without dessert :( and headed home. Nick's attitude didn't improve; he started screaming and wandering around the living room. We never figured out what he wanted. Usually he takes his (liquid) vitamin well, but tonight he knocked the bottle out of my hand and the stinky liquid (with iron in it) spilled all over my couch and new pajamas. We decided at that point to put Nick to bed early, even though it was only 7:20. This baby was not getting more pleasant as it got later. He tried to flip himself off of the changing table, and screamed for about two minutes when I put him in his crib. Then. . . . silence. Hopefully tomorrow will be a better day.

My doctor had some not so good news for me today too; my thyroid is functioning abnormally. That certainly explains the lack of weight loss. I asked the doctor if he had any suggestions for me, and he told me (really) that if he did, he wouldn't be working, he'd be living off of the residuals of his idea. In other words, diet and exercise and good luck. Sigh. I believe I'm going to go on our new elliptical trainer tonight, even if it's only for a little while. Is it bad to exercise just so you won't feel guilty about eating a slice of cake? Even if it is bad, I'm doing it anyway.

Update: I just did 30 minutes on my new elliptical trainer, burned 198 calories, and went 1.47 miles. I'm drenched with sweat and I'm having the cake anyway. Hopefully a small piece won't be more than 198 calories.
Posted by Melissa E. at 9:14 PM