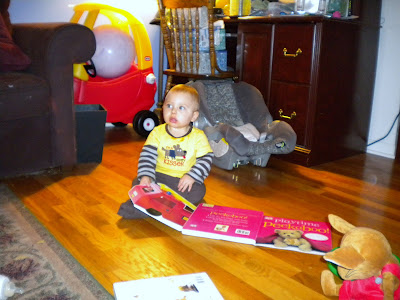 Lately, Nick has been playing with his books a lot. We're talking flipping the pages for ten minutes or more. After I read him a particular book, he'll hunt it down on the shelf, pull it down, and start turning the pages. He particularly likes books where he can touch and feel stuff, and books with flaps to open. Unfortunately, he sometimes tears the pages, even on board books. I'm surprised, though, that such a little boy plays with his books just as much as his noisy toys. I love his little onesie, if you can't read it it says, "I'm a Sloppy Kisser." And he is. 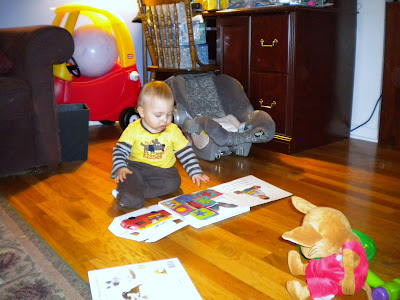 Despite having to tutor early this morning, it was a pretty good day. I finished the grocery shopping and made some homemade bread. I tweaked the recipe to make the bread softer and more fluffy. It turned out spectacular; I've never made bread this good before. I put some stew in the crockpot and took a nice, long nap. Naps always feel so good in the middle of the afternoon. 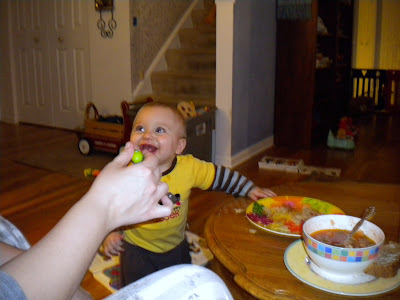 I made my rosemary garbanzo bean zucchini stew today, only I used ground turkey instead of chicken. It turned out pretty good, and Nick absolutely loved it. He ate a pretty big amount for a baby. He also ate almost a whole piece of wheat bread. I'm very glad my kid likes garbanzo beans and zucchini already.
I'm figuring that if I only feed him wheat bread, that he won't be one of those kids who only eats bleached white wonder bread. We'll see. I hope he continues to eat such healthy fare as he gets older and more picky. Actually, though, I think he likes food best when he feels like he's sneaking a bite from our bowls. It must taste better that way. Below is the link to the address with the recipe:
http://cestlaviemdw3437.blogspot.com/2009/06/delicious-summer-stew.html 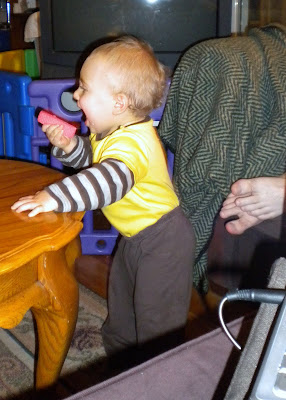 Here's Nick eating a yummy strawberry wafer cookie. I think he's teething, because he's been biting everything in sight. He's been cruising more than ever, and even standing for a second or two without holding on to anything. That baby has some strong thighs. 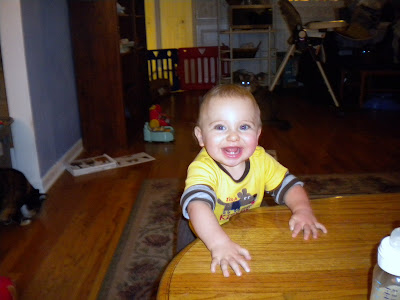 I think every day would be better if I got to take a two-hour nap. It sure made today extra-special. Now we're going to go and give Nick a bath. He has chunks of stew and broth all over his neck, and his hair has bread crumbs in it. Only a bath will do. :)
Posted by Melissa E. at 6:31 PM