Learning to Drink from a Cup 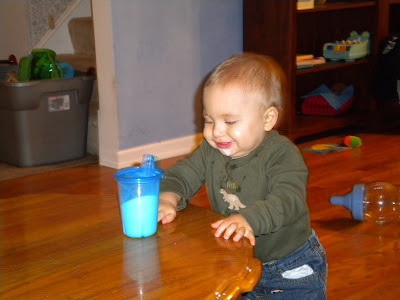 Nick is learning how to drink from a cup. Our doctor recommended that at 1 year, we completely switch Nicholas over from formula to whole milk, and from bottles to cups. We've been working on the cups for awhile, and he's mostly got it. Good thing, too, since his birthday is tomorrow. He does drip a lot, but that's more the nature of the cup than anything else. You see, Nicholas doesn't like the fancy cups with the handles and the no-drip spout. He prefers the cheap recycleable plastic cups that drip like crazy all over the front of his shirt. 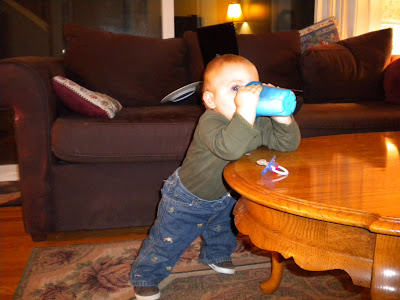 But he does drink from the cup. Quite a bit, actually. Plus, he's handled the transition to milk very well. We started mixing whole milk in a little at a time, and now he doesn't mind formula, milk, or any combination of the two. Greg rearranged our living room last night; we have to make room for the elliptical trainer, which is coming next Tuesday. Then I'll have absolutely no excuse not to exercise. Nick, on the other hand, does not stop moving. It's exhausting but rather cute, I think. In the photo below, he was dumping out his toys one at a time and chewing on a plastic spoon. 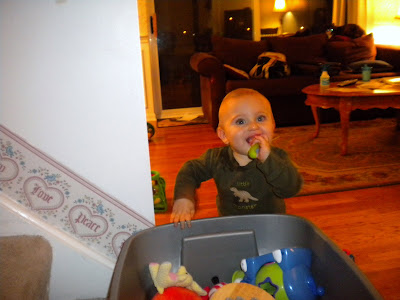 I love this picture because the movement is so clear; Nick doesn't stop crawling lately. It's like he sat still for the first seven or eight months of his life, and he's really happy to be able to move by himself. So he moves. Constantly. And with a vigor I wish I could emulate. This is a kind of crab-crawl that Nick sometimes does. He stands and then puts his hands down and swings his legs around. 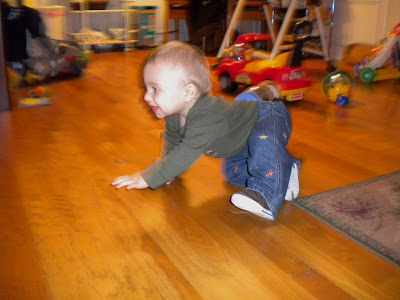 I always have a hard time waking up on Mondays; today I believe I hit the snooze alarm at least three times. On the weekends, I often take a nap while Nick has his nap. The sleep feels so good, especially now that the weather is getting colder. I feel the urge to hibernate.
Posted by Melissa E. at 8:45 PM