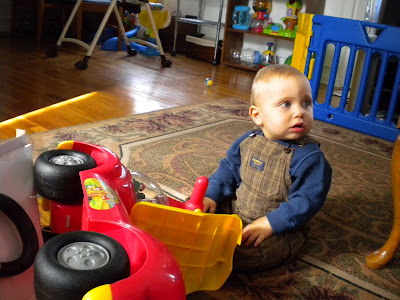 Nick's official birthday isn't until Tuesday, and his birthday party isn't until Saturday, but Nick's grandma and grandpa (Greg's dad and stepmom) came down to visit today for a little pre-birthday fun. They brought with them a cool new ride-on toy for Nick. He wasn't sure what to think of it at first, but he watched intently as Greg took it out of the package. It's amazing how many of those little plastic ties can be on one baby toy. 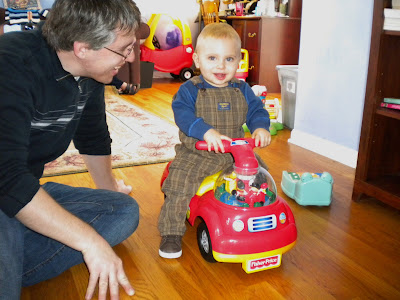 He figured out really quick what to do with his new ride-on toy. This one is more fun than any of his other ride-ons; it's short enough for his little toes to touch the ground. Daddy was showing him how to push with his feet to make it move. Best of all, it has little fireman that go around in a circle and play music. Nick figured out really quick how to push those buttons. I think this toy is going to be a favorite; I can already hear the music playing in my head after hearing it so many times. They also brought lots of baby socks for Nick--I was thrilled about that because I have one heck of a time finding two matching socks for this child on a daily basis. I think the dryer keeps eating them. 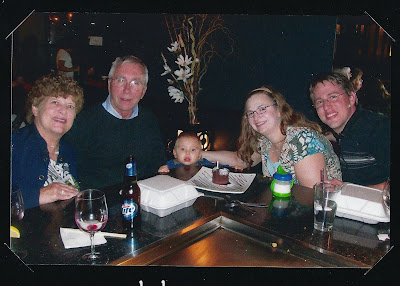 For dinner, Nick's grandma and grandpa took us out to our favorite Japanese steakhouse/sushi place. Kiku, in Naperville, is our favorite because of the high-quality food. I had filet and shrimp on the hibachi with veggies and rice, and Nick ate lots of it. He also enjoyed eating our sauteed calamari, their special soup, and a few bites of Greg's sushi. We ate a late lunch/early dinner, and we are still extremely stuffed. I couldn't believe Nick ate so much, and from chopsticks nonetheless.
Best of all, when they found out it was Nick's birthday, they brought a chocolate cake with one candle, and they sang Happy Birthday (or some variation of such) to him in Japanese. We clapped along, and Nick seemed pleased but truly confused as to why we were all clapping and singing. He wasn't confused at all about what to do with that cake though; his mouth opened up like a little bird and he kept grabbing for the whole thing.
Not a bad celebration for a baby's first birthday. I'm glad he had today, because Tuesday Greg works late and I don't think we will be doing anything special. I still can't believe my boy will be one this week. Wow.
Posted by Melissa E. at 6:55 PM