Nick gets more Christmases than most kids. You see, since Greg and I both have divorced parents, Nick ended up having four grandmas, three grandpas, and two great-grandmas. For three of his grandmas (and two of his grandpas), Nick is the first and only grandchild, at least until next year. He is a very lucky boy, and this is especially evident around Christmastime, both for love and attention reasons and for the obvious presents that come with lots of grandmas and grandpas. Nick is a total people person, though, and having new people to play with was the highlight of each of his Christmases. 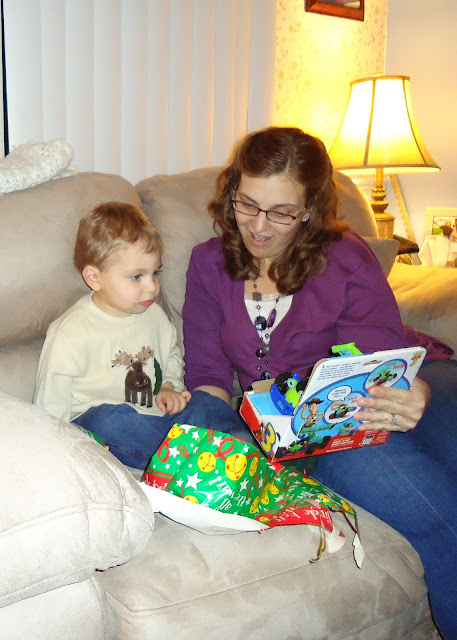 Christmas #1 was on the 23rd, with Nick's Grandpa Mike and Grandma Patty. My dad has really been enjoying being a grandpa, especially since Nick has started walking and talking. I can remember him getting down on the floor and playing with my sister and I when we were little kids, and it's so nice to see him having so much fun playing with his grandson now. Although Nick doesn't look too thrilled in the above picture, as soon as he figured out what this car does, he got really excited. All you have to do is shake it up and put the car on the floor, and it drives itself. This was a revelation for my boy, who loves anything with wheels. 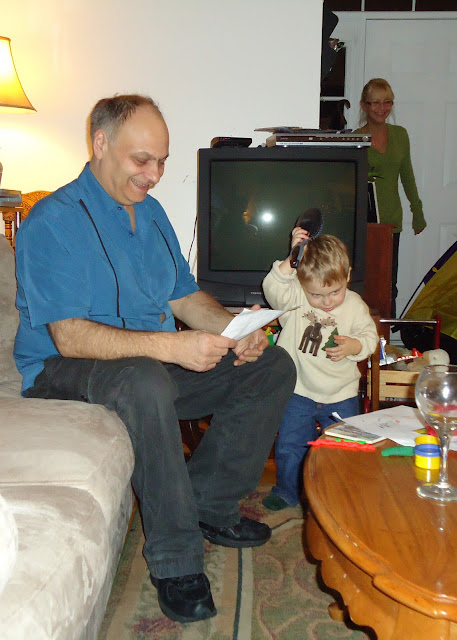 I love the above picture because there are so many random things going on. First, Grandpa Mike is looking at a picture Nick drew while Nick brushes his hair with a rather serious look on his face. You can see Nick's new tent in the background, and Grandma Patty, too, who is laughing at the whole scene. On the table are several Play Doh creations. Nick likes to make people roll balls and make him snakes. "Make snake!," he'll insist, handing the Play Doh over to Grandma Patty. 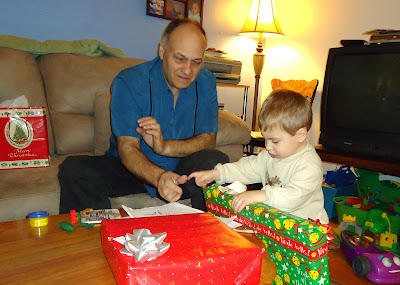 Above you can see Nick opening his favorite present of the evening, a tent with tunnel attached. As soon as I saw it, I knew that this present would be a winner. I can remember how much fun it was to play in tents and make forts when I was a kid. Nick's eyes got really big and he crawled inside as soon as it was put together. I think this is going to be our go-to toy for rainy days when he gets bored. 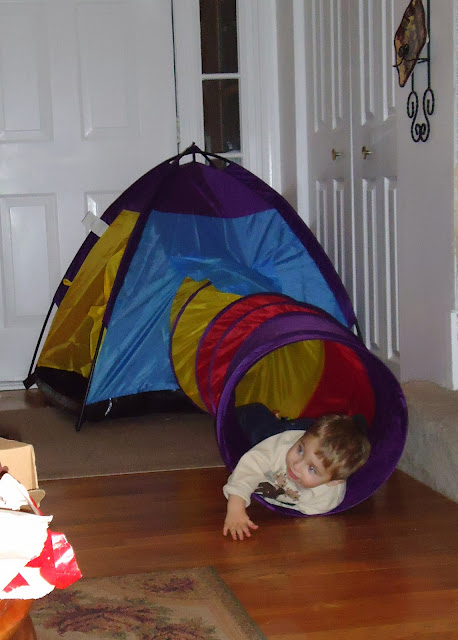 Nick got lots of play time with his grandma and grandpa, and he was so excited he wouldn't even eat his pizza. He just wanted to color with them and play with his new toys. I believe they both left here pretty exhausted from his hijinks. ﻿He kept begging them to come down on the floor and play with him. "Play with me. Please! Sit here." It was a really relaxing, low key evening, and a great start to our yearly Christmas festivities.
Posted by Melissa E. at 11:04 PM