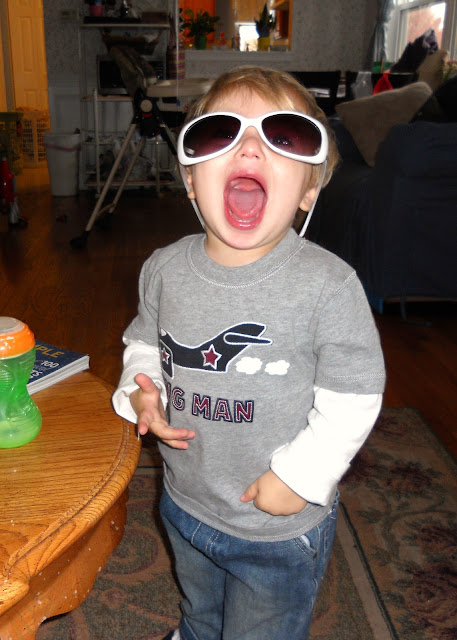 What, you say? What begins? Well, the joys of potty training. Last weekend Greg and I bought Nick his own little potty. He's been talking about using the potty for awhile, but I don't really believe in pushing kids into potty training too early. (Even though my mother insists I was potty trained at 18 months.)

However, since Nicholas is now two, I figured it wouldn't hurt to get him confortable with the idea of using a potty. He became incredibly excited when we were in the Target and he saw the potties. The store had conveniently put them on the bottom shelf, easily accessible to toddlers. So Nick tried sitting on each of them, insisting, "I go poopy on the potty!" Here's what we decided on: 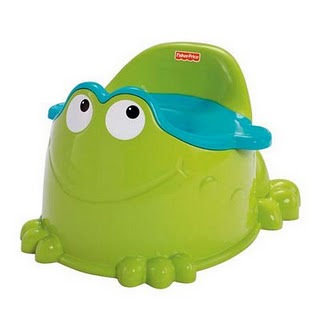 We chose this model for ease of cleaning rather than style. The fancy ones with the buttons and sound effects were cute in the store, but I could imagine them being rather gross to clean out. This one had fewer crevices. Plus, Nick liked it. He kept pointing to it in the back of the cart as we shopped, exclaiming, "That's my potty!" to anyone who walked past. We figured he was enthusiastic enough to at least give it a try.

I do have more experience than your average mom in this challenging endeavor called potty training. You see, I supported myself through most of my high school and college years by working in daycare centers. I even spent an entire summer working in the "2s" room, along with another adult plus sixteen two-year-olds. Our goals were 1.) to potty train them, 2.) to prevent them from biting one another, and 3.) to try to get them to take afternoon naps. Sound easy? Let's just say they were like a game of whack-a-mole: you get most of them to take a nap, and then somebody pees on the floor. As you're cleaning up that mess, somebody bites somebody else and the resulting cries wake up three more children, one of whom has a dirty diaper. While you're cleaning up that stinky mess, the other two bite one another, leading to more crying, and, ultimately, more peeing on the floor. I remember spending a lot of time with bleach water, and even more time writing up "biting reports." There is a very good reason I did not even consider having children before age 30. Anyhow, whenever I get frustrated with Nick, I just remember that summer and try to think of what it would be like with fifteen more of him. Then I smile and give my boy a hug.

Anyhow, back to our ill-fated first potty training attempt. I should warn sensitive readers that this is not a story to read while eating a snack. In fact, if you are at all grossed out by potty-type talk, please just stop reading right here.

***Warning*** Gross but funny story ahead

From my considerable potty training experience, I did learn that for very young little boys, they need to connect the dots and figure out when they are peeing. You have to be lucky enough to catch them peeing and get some in the potty. Then a lightbulb goes on and they start to get what to do (hopefully). We started out by giving Nick a nice big cup of orange juice. We hardly ever give Nick juice of any kind, but since we all have colds I figured the Vitamin C would be good for us. Over the course of about an hour, Nick drank about 14 ounces of orange juice. He told us "I go potty!" so Greg took him into the bathroom and showed him how to sit on his new potty.

Nicholas was super-excited about the potty, though he didn't really want to sit on it much. He was more interested in pulling out the bowl, touching the froggy's eyes, and even wearing it like a hat. I suggested to Greg that perhaps we should just leave Nick sans diaper for awhile, and try to catch him peeing. Nick certainly was happy enough wandering around naked, and we have hardwood floors. I decided that after all of that orange juice, something was sure to happen soon.

Fast forward about an hour. Not only has no pee decided to appear, Nick has determined that the potty is the greatest toy ever. He especially likes to sit on it with one foot in the bowl, and put toys into it. Since it was nearly dinnertime, we were about ready to give up and put the diaper back on. Then comes the gross part.

I'm sure you've guessed it by now. #2. All over the floor in a giant pile, about a foot from the potty. Nick announced immediately afterward, "I go poopy!" Never have I seen such a look of horror on my husband's face. Indeed, the look on his face alone made me start laughing hysterically as we tried to stop Nick from spreading it around the living room. Greg cleaned up the worst of the mess as I scrubbed Nick the tub. I laughed the entire time, because, at that point, what else can you do? It was my own fault for leaving the diaper off for so long. My daycare experience served me well after that, when I remembered how to make a 10:1 bleach water solution to sanitize both the floor and the potty.

As for Nick, he didn't seem to care at all about the mess he had made. But he was really, really ticked off when I had to wrestle him into a diaper after his bath. Nick wanted naked time to go on forever. He never did pee, at least not that night. However, when Greg woke him up this morning, he had soaked through his pajamas, blankets, and sheets. My boy must have a super bladder to have held it that long.

We'll try again this week, but I am not in a hurry. I know that this process can take a long time, and I will make it into a power struggle if we try to push it too soon. A power struggle with a two-year-old is one that will definitely be lost. Nick is still excited about his potty, so we'll go slowly and try periodically as our patience allows. Most importantly, I know I have to keep a sense of humor about the whole thing.
Posted by Melissa E. at 9:58 PM