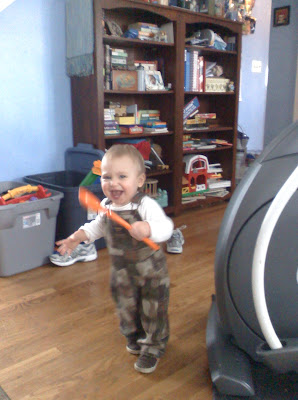 I love three-day weekends. Nick does, too, as evidenced by the joy in his face from simply roaming the house with a bright orange spoon. The cats, however, were not smiling after Nick decided to "tap" them with his spoon. He's been on the rampage today, whether it's throwing his lunch at us or refusing to nap, or emptying the clean laundry all over the kitchen floor. Cute but destructive.

Pardon the poor picture quality. I got a new cellphone this weekend, since my old one would only hold a charge for about 30 minutes. I chose a Motorola Crush, and it's my first phone that doesn't have a real keypad. It's all touchscreen. It even has this feature when where you turn it horizontally, it turns into a qwerty keypad. Not that I text all that much.

This phone is very fancy, but I'll have to get used to talking on it. My face keeps pushing random buttons on the touchscreen while I'm talking to someone. But it does have a camera, albeit a 2.0 megapixel one with no image stabilization. I do like the blurriness, though. It's kind of realistic, since that's how Nick is in real life. He moves so fast everything is blurry. :) 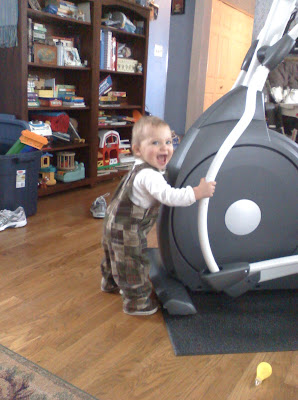 Here's Nick hugging our elliptical trainer, which we're getting a lot of use out of so far in 2010. I'm using it every other day for at least 30 minutes, on level 10 in the fat burning mode. I keep my heart rate around 130 or above, and I think this machine was definitely worth the money. It cost about as much as 18 months of our YMCA membership, and we've already used it WAY more than we ever went to the Y. On the off days, I do a pilates bodyband workout. So far, so good, although I still have not lost one single pound.

Greg uses the elliptical nearly every day now, while Nick is in his high chair having breakfast. It's kind of interesting the way Nicholas looks at his daddy while he's on the elliptical. I guess it must seem weird, that Daddy is running to nowhere, fast.

One of my hobbies is reading about evolutionary history and human prehistory; humans used to spend all of their time searching for food and running from predators. Now, our lives are so stable that we pay tons of money for machines that help us run to nowhere. Such is modern life, I suppose. Not that I'd want to be running from a cougar or some such. I would be prey in 5 seconds flat. But I don't do too badly running to nowhere while watching TV shows I missed during the week. Lately I've been watching "Glee," "Modern Family," and "Mercy." I bribe myself into exercising with these shows. It's like a guilty pleasure coupled with a mandatory exercise routine.
Posted by Melissa E. at 5:12 PM