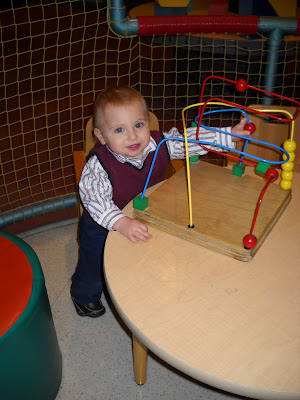 Looking at these pictures from the Museum of Science and Industry last week, I'm already nostalgic for my long, relaxing winter break. Starting back was so hard.  I miss taking naps with Nick and cuddling up with a book on the sofa. Nick, though, was happy to be back at his babysitter's. He loves playing with the other kids, and I think he gets bored at home with just me. I'm going to have to make sure to sign him up for playgroups or something over the summer; he thrives when he gets to play with other kids.

I think I miss Nick now more than I did when he was younger. I feel like by the time I get him home and fed, there's not much time to play before bedtime arrives. Tonight I made sure we had time to play catch. Nick understands if I tell him to throw him the ball. He'll play catch with me, although his aim isn't much better than mine. I'm trying to teach him how to build towers, too. Mainly he just knocks mine over, chews on the blocks, and laughs uproariously. 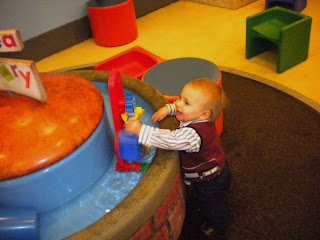 This picture is from the Idea Factory at the MSI. I love that all of the museums have special areas for babies now. This kid already has plenty of positive experiences with museums, and he's only one. Nick sure loves to play with water. Tonight he got really mad when I pulled him away from splashing in the cat water bowl. Because I'm so mean, you know.

I've been doing pretty well with my resolutions thus far. I haven't lost a pound since leaving the hospital from having Nick, and my endocrinologist told me its my thyroid causing  the problem. She said it was a miracle I hadn't gained weight. I guess your TSH is supposed to be between 0.45 and 4.5, and mine was 68 at my last blood test (it's an inverse relationship). That means I've been very hypothyroid, which explains the desire for constant naps. But my thyroid is no reason to sit on my butt and eat junk, especially when I have a huge, expensive, health-club quality elliptical trainer taking up half of my living room. This year, I think rather than focusing on the weight, I'm going to concentrate on writing down everything I eat and dragging myself onto that torturous elliptical trainer. 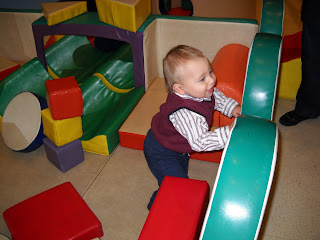 I watched The Biggest Loser today and did a 35 minute workout. I love that show, and I'm addicted to it. The new season is especially motivating, and it's great to work out to because the people on the show are always exercising. I noticed, though, that I am hungry more when I'm actively watching what I eat. I actually ate an entire box of those Green Giant mixed veggies. That's two servings, but it filled me up pretty well. I believe I'm going to have to buy a lot more of those. My favorite is the one with black beans because there's a lot of protein in them.

Check out Nick getting some exercise in the padded baby room. I want one of those for adults. I think it would be fun to bounce around and not worry about falling. He pushed over the whole wall. No fear for my little man. He doesn't need a special place to play, though. Nick makes every place a baby room of fun. He's fine in the cart at WalMart, pulling things off of the shelves. Or crawling around the kitchen, pulling out all of the silicone baking cups and cookie cutters. His favorite thus far is to break into the bathroom and dump over the container with the cat toys. . . he must have a thing for catnip.

Getting back to school after break was hard, but I really did miss my kids. It was nice yesterday walking in and having four or five kids in each room run up to me with stories to tell. I don't know what people who don't like their jobs do. . .
Posted by Melissa E. at 9:59 PM