Random thoughts about my son's talents 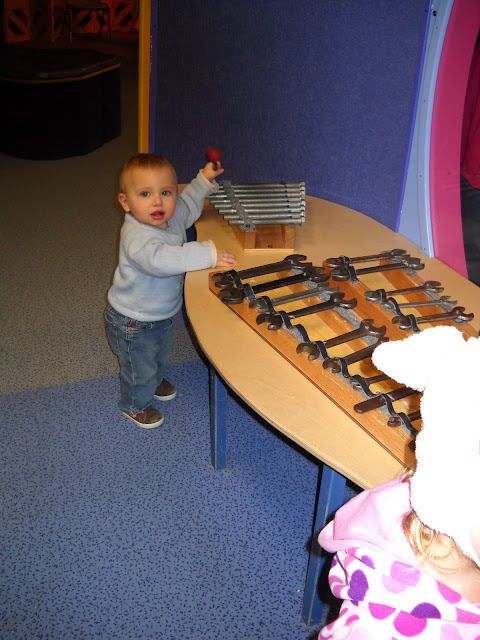 Nick sure likes to make music. One of his first favorite toys was his little piano, and even at five months, he'd bang away happily at the keys, enjoying the noise. These pictures are from the DuPage Children's Museum, and I snitched them from my mother-in-law's camera, since mine is still in the shop. I think Nick would love it if I came home one day with drumsticks like this, with big rubber tips. My son has many talents, and loud music is just one of them. I wonder if he'll be interested in playing a musical instrument someday. . . 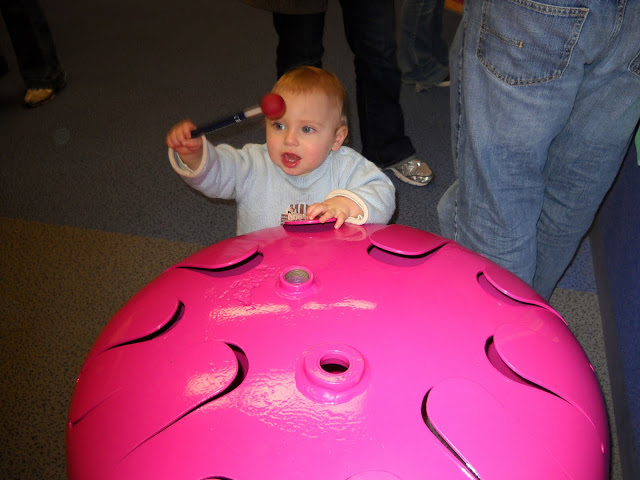 Today Nick was into singing and banging on things. After work, I had to take him on some errands. Through the blowing snow, we drove to the mall and I had to put him in the stroller while I handled some Christmas returns. He cooed and sang to every lady in sight, whether it was a clerk in the Gymboree or a little baby in a stroller. He also loved banging on the side of the elevator. Nicholas has this habit of trying to catch a stranger's eye and then smiling really big until they smile back. It's quite endearing, and it is interesting to see how people react, especially if they're people who aren't used to being around kids. So far he usually wins and makes the person smile. Today it was a somber-looking gentleman in a business suit on the elevator. 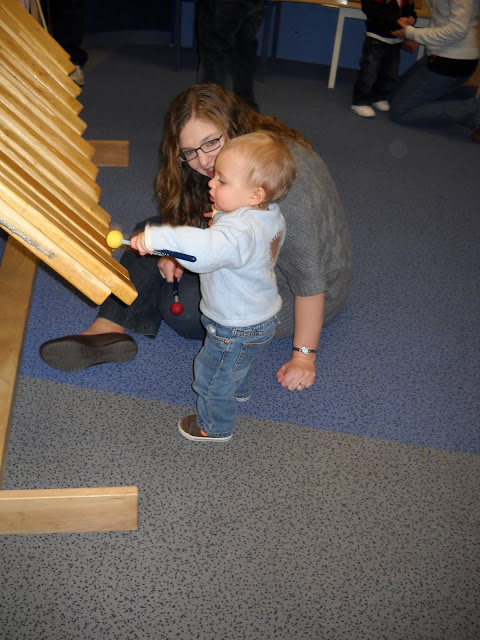 Then, after the mall, I had to go in for a blood draw. I have thyroid disease that's not well-controlled right now, so blood work has been happening more often. Anyhow, just while I was waiting in the waiting room to be called, Nick managed to traverse the entire huge room while humming to himself, walk by every single person and grin hugely, and destroy a magazine. I was chasing him the entire time trying to minimize the damage. He smacked on the fish tank and tried to tap the fishies, hung onto the leg of an older lady, and tried to steal a book from a teenaged boy. Then he removed the door stopper and began to chew on it furiously. This was in five minutes. I simply chased him as he waved the door stopper around.

But the most hilarious part was when I got called in for the blood draw. Nick is too big to sit on my lap while they stick me. Besides, he wouldn't be able to stay still. So I sat him on the floor with a magazine. He waited just until the lady had the needle in, and then he laughed and ran off. "Don't worry," the phlebotomist said, "he can't go far. We're enclosed by doors." However, Nick tried to pull a pile of papers off of the desk and laughed at us. Then he tore a sign off of the refrigerator and took off into the reception area, again singing at the top of his baby lungs. He was in the area behind the counter where the receptionists sit, crawling under the counter. Since I was immobile, I could only listen as Nick squealed in glee and crawled under their desks. He ripped a big orange sticker off of one of their printers and was hugging a receptionist's leg when I finally retrieved him. I do believe Nick made their day.