Happy Gardening Surprises and Too Much Time in the Car 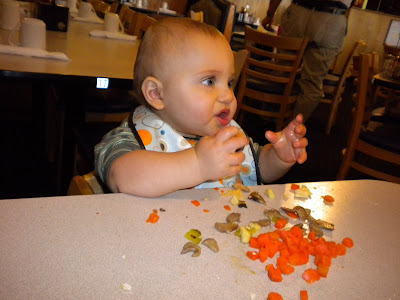 Nick is getting better about eating finger foods. His Grandma bought him this nice bib with a pocket to catch all of the food that he drops. That has made feeding him less messy, although I'm sure waitresses curse us after we leave. It sure wastes less food, because we can just dump the pocket back onto the table when he's done, and there are his seconds. I believe here he was eating mushrooms, carrots, dumplings, hamburger, and french fries. His favorites were the mushrooms and fries. 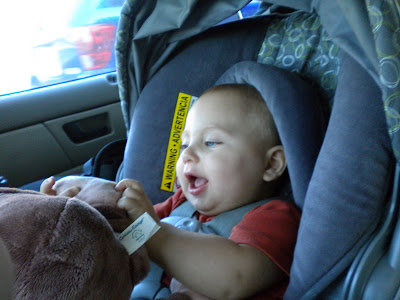 This is how poor Nick spent most of his weekend; I believe it was something like 16 hours in the car from Friday through to tonight. We were in Gleason, Wisconsin, for Greg's Grandma's 95th Birthday. I'll talk more about my trip later this week. All I can say now is that it feels wonderful to be out of the car! Nick thinks so too. When we got home, he played happily (and gratefully) in the baby cage. I'm afraid he's going to flip out tomorrow when we put him back in the car seat. 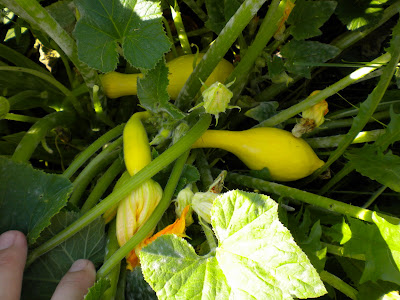 I was surprised this week at what my garden actually managed to produce. Despite all of the Japanese beetles and the lack of attention I gave my garden, I still reaped at least a few rewards. I've got baby yellow squashies!
I think they're very cute, and I want to slice them up with olive oil and garlic later this week. I have to make sure I catch them before they get too big. It sure took long enough for them to start producing. 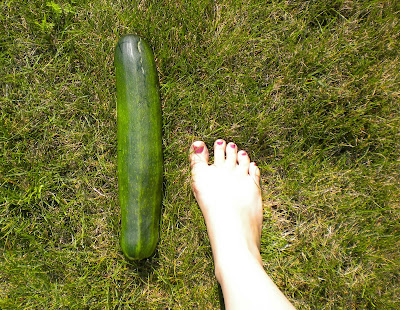 I was also impressed with the size of this monster zucchini. I needed something to use for scale, and, well, my foot was already there.
I am hoping that I can spend more time next year gardening. I want to double the size of my raised bed garden, and keep better track of the weeds.
I killed about twenty Japanese Beetles today; I hate those little suckers. They decimated my raspberry bush. I guess I'll have to add another task to my evening rituals: killing bugs.