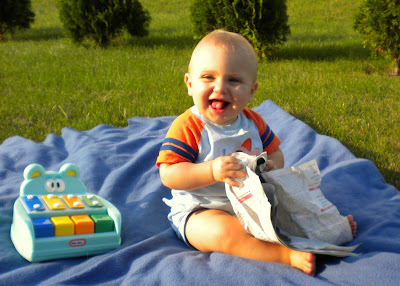 Nick is becoming a very high maintenance baby. All this week, I came home to work to find that he would not stay in the baby cage without screaming and dissolving in pitiful tears. He seems fine in there when Greg is getting ready in the morning; I'm not sure what the aversion is for him.

It seems like Nicholas just wants to explore. So I've been rather creative. Today I had to plant a raspberry bush that my mom gave me. It took me a few minutes to figure out a strategy for getting this done while still supervising Nick, especially since he refuses to play in the baby cage. I brought a blanket, a toy, and an old magazine (for him to rip up and destroy) outside and placed it near where I needed to work.

The only issue is that Nick now crawls. He did not stay on the blanket for long, and he kept coming over to the area with dirt, sod clumps, garden implements, and plants with pokey things on them. Do you have any idea how hard it is to dig a 16" hole through sod while keeping track of how much grass a baby is ingesting? I now know. Nick ripped some leaves off of one of my zucchini plants, and was pinched a bit by the stem. Then he tried to eat a Japanese beetle. I didn't feel bad for the beetle, but I wasn't sure that it would be a healthy dinner choice for Nick, so I grabbed it and smooshed it instead. 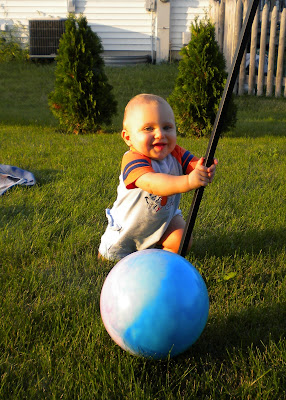 He did love being outside, though, and the grass was an interesting feature for him. He isn't used to crawling on it yet. Nick kept touching it and pulling on it and trying to eat it. He almost looked confused. As I filled the bird feeders, Nicholas used one of my bird feeder poles to try to stand up. One good thing about grass is that it is soft when you land on your bottom.

I will finish with a video of Nick drinking his formula out of a cup with no lid. Yes, we were crazy.

Nick loves to drink out of cups, but he doesn't like the sippy part. He'd rather drink out of a regular cup. He can do it, too, to some extent. Until he can't. That's when the mess starts.