A Baby on a Train, and a Bus, and a Boat 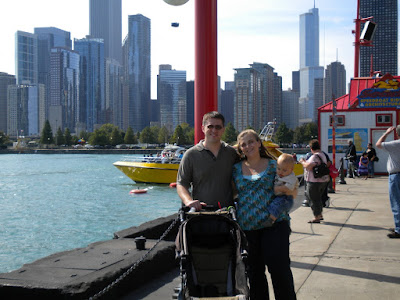 It was another exciting, exhausting weekend. Navy Pier was our destination of choice this Saturday. A friend of mine brought her two kids to visit us, and they wanted to take the train into the city. (Actually, this particular friend was my college roommate nearly twelve years ago. Wow, it doesn't seem like that long. I suddenly feel old. . .)

We decided on Navy Pier, because there is plenty to do in one area that is suitable for kids. Believe me, travelling with a nine-year-old, an almost-three-year-old, and a ten-month-old is challenging, to say the least. In order to get there, we drove two cars to Aurora, then took the Metra train to Union Station, and finally took the bus to Navy Pier. 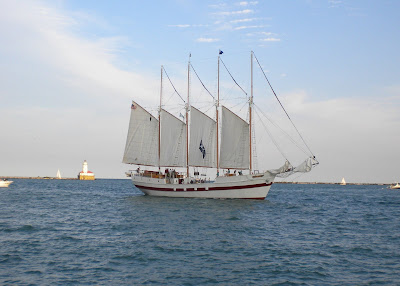 The weather couldn't have been better; It was in the 70s and sunny all day. The kids wanted to take a boat trip, so we decided on a trip designed for kids on a Tall Sailing Ship. The program included games and songs for the kids. It lasted an hour and the ship truly sailed the old-fashioned way. Once we got past the pier, the engines were turned off and the sails raised. Very cool.

There was also information about what it was like to be a sailor on the Great Lakes in the 1800s. The kids even got to help with the rigging and the sails, which was very cool. I liked this ship better than other boat tours I've been on in the last few years; it was more interactive and the boat was beautiful. 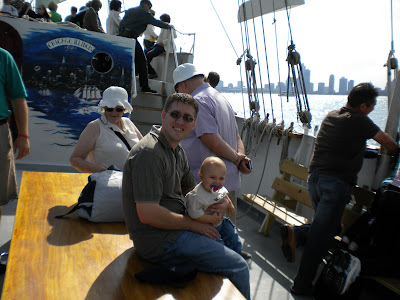 Nick really seemed to like being on the ship; he didn't get seasick at all. I believe he wanted to crawl around, however, which wasn't possible. He'll enjoy trips like this a lot more when he's a little older.

After our tour on the sailing ship, we went to the Chicago Children's Museum, which was awesome and the highlight of Nick's day. I'll talk about that another day.

Probably the only rough part of the day happened in the evening. We missed the 8:40 BNSF train back to Aurora, and had to sit and wait for the 10:40 train. 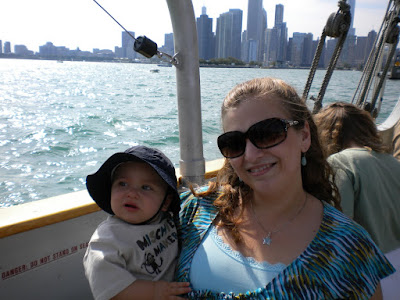 Yes, that's 10:40 p.m. Nearly two hours in a train station. With three children. Nothing was open. Well after their bedtimes. Plus, there was an announcement set to loop again and again through the waiting area where we were sitting. It said simply, "Track 6. . . Track 8. . . Track 6. . . Track 8," over and over again until it was time to get back on the train. It was like one of those reality show challenges: "How much stress can you handle while under sleep deprivation?" Finally, we got on our train. Then a little over an hour back to the train station and a 45 minute drive home.

I believe we got back to the house around 1:30 a.m. I also had to be up at 6:30 Sunday morning for tutoring. But I would still say that all of the trouble was worth it. The ship was really a unique experience, and visiting Chicago always feels good. However, I ate way too much naughty food, so I'm trying to do better this week. In fact, I think I'm going to go and do a Pilates DVD workout right now. . .