I don't suppose I ever finished blogging about our weekend in Gleason, Wisconsin. It's kind of a tradition that we go up there the weekend after Labor Day for Greg's Grandma Marie's Birthday. This was her 95th, so it was extra special.

Nick seemed thrilled to see her, as well as his grandma and grandpa. He also had fun trying to destroy everything in her house: Magazines, antique doorstops, picture frames, books. Nick had his sights on all of them. He especially liked harrassing his great-grandma's cats. They learned quickly to stay away from the baby. Here is Nick with his great-grandma. We went out to a nice restaurant, and I dined on scallops, while Greg had shrimp and steak. Nick's favorite seemed to be my french onion soup. He kept opening his mouth for more. He also loved the croutons, which he chewed on for awhile and then threw on the floor. They brought Nick's Great-Grandma some carrot cake and we all sang happy birthday. The part of the weekend where we weren't in the car was lovely. The weather was absolutely amazing. Usually when we go up to this part of Wisconsin, it is freezing and drizzly. This year it was sunny and in the 70s. I wish we would've had more chance to go walking. The air smells so fresh up there. Greg had us walk outside and turn all the lights off so that we could see the stars. That far from civilization, you can see a ton of stars, and it was awesome looking up at them. 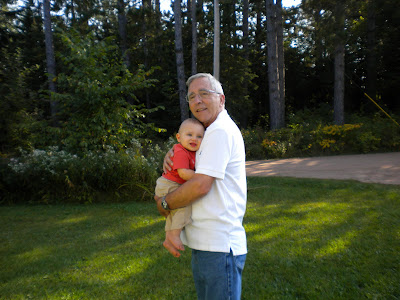 Here is Nick with his Grandpa Jay, who isn't very comfortable with babies. I've been trying since Nicholas was born to get a picture where the two of them don't look uncomfortable. This one isn't too bad. The trees behind them are beautiful, as well. 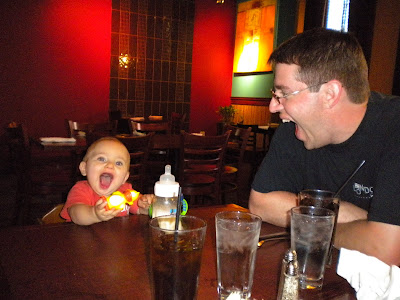 I had to include this picture, because I think it is hilarious. We stopped in Madison at a restaurant specializing in South American food, and Nick was thrilled when I brought out his duckie toy.

I've been very busy this week; next week I start teaching, so it's been a mad rush to get lesson plans ready and find classroom resources. I just spent the last hour searching for a free download of a Brahms piano/violin sonata. My students will be reading a story where one of the main characters has to play such a sonata, and I wanted them to hear what it was like. I finally found a link to one, and I just hope it'll work on my school computer.

We have very sensitive filters there, and sometimes perfectly legitimate stuff won't work. For example, I kept trying to access this site with pictures of baby armadillos (for another story). I got the big "STOP" and the notice "provocative attire." I jumped and clicked out of the internet, and a funny picture appeared in my head of what kind of provocative attire armadillos might be wearing. Perhaps they had low cut blouses or daisy dukes?

Now, I looked up this site later, when I got home, and the only pictures on this site are of armadillos. Mind you, they're not wearing any clothes, but then again, armadillos aren't supposed to wear clothing. The site is a children's informational site about animals. Sigh. 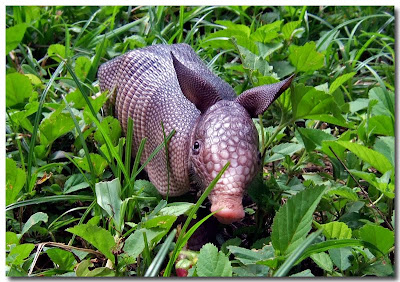