We don't always have good days, but when we do they are really good. . .

I am very proud of myself right now. Constantly growing little boys require errands that cannot be completed without them. For example, it is not possible to have them fitted for shoes or get a haircut without actually bringing them out in public. I've been putting both errands off for awhile now. So, even though I was very exhausted after a long week (and a file audit) at work, I decided to head to the outlet mall. Yup. I'm brave. 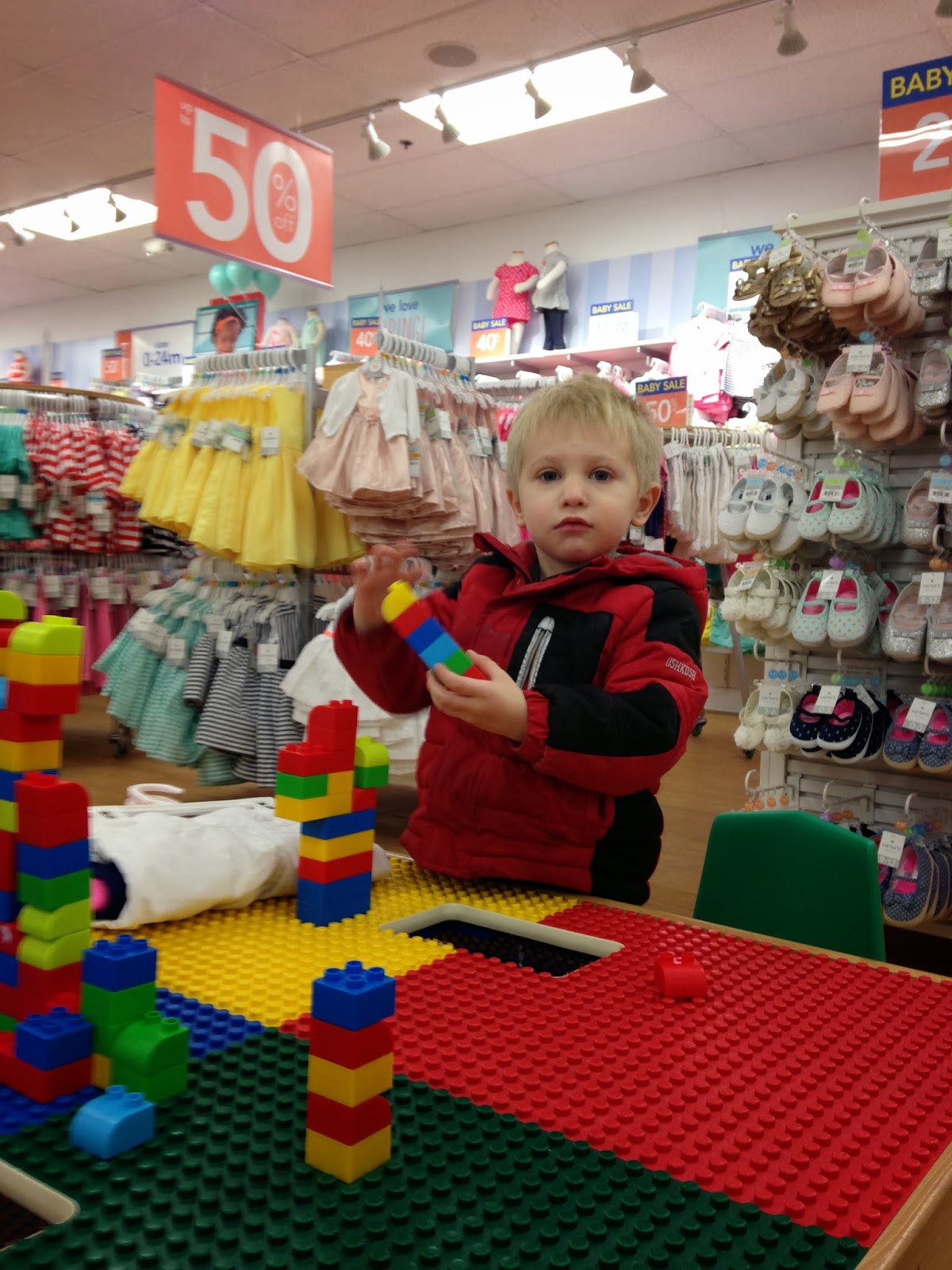 I like to hit up the clearance sales, and this store had a Lego table, thank goodness. I stocked up on shirts, footie pajamas for next year, and sock, guessing at the sizes and scoring $3.99 pajamas (with an additional 20% off). The only problem is that Henry didn't want to leave. Nick was pretty mellow tonight, and even got excited about the pjs I found for him with the feet. Has he inherited my shopping gene after all? I'm not sure.

The hardest part of a shopping trip, for me, is always getting the boys fitted with shoes. I know I am always sizing them incorrectly, and Nick's been wearing a pair of shoes I bought last year that I knew were too big. They were an 11 and he's a 10, though I bought 10 1/2 shoes for him on the advice of the saleslady, who was very patient. Notice the light up fireman shoes. Heck, for $40 a pair (BOGO, however) they'd better light up, make my kid behave, and direct me home. I must sound crazy, spending that much for shoes. But I have heel spurs, fallen arches, and all kinds of foot problems, and I need to know that my kids are wearing good quality shoes, even if they only own two pairs at any given time. 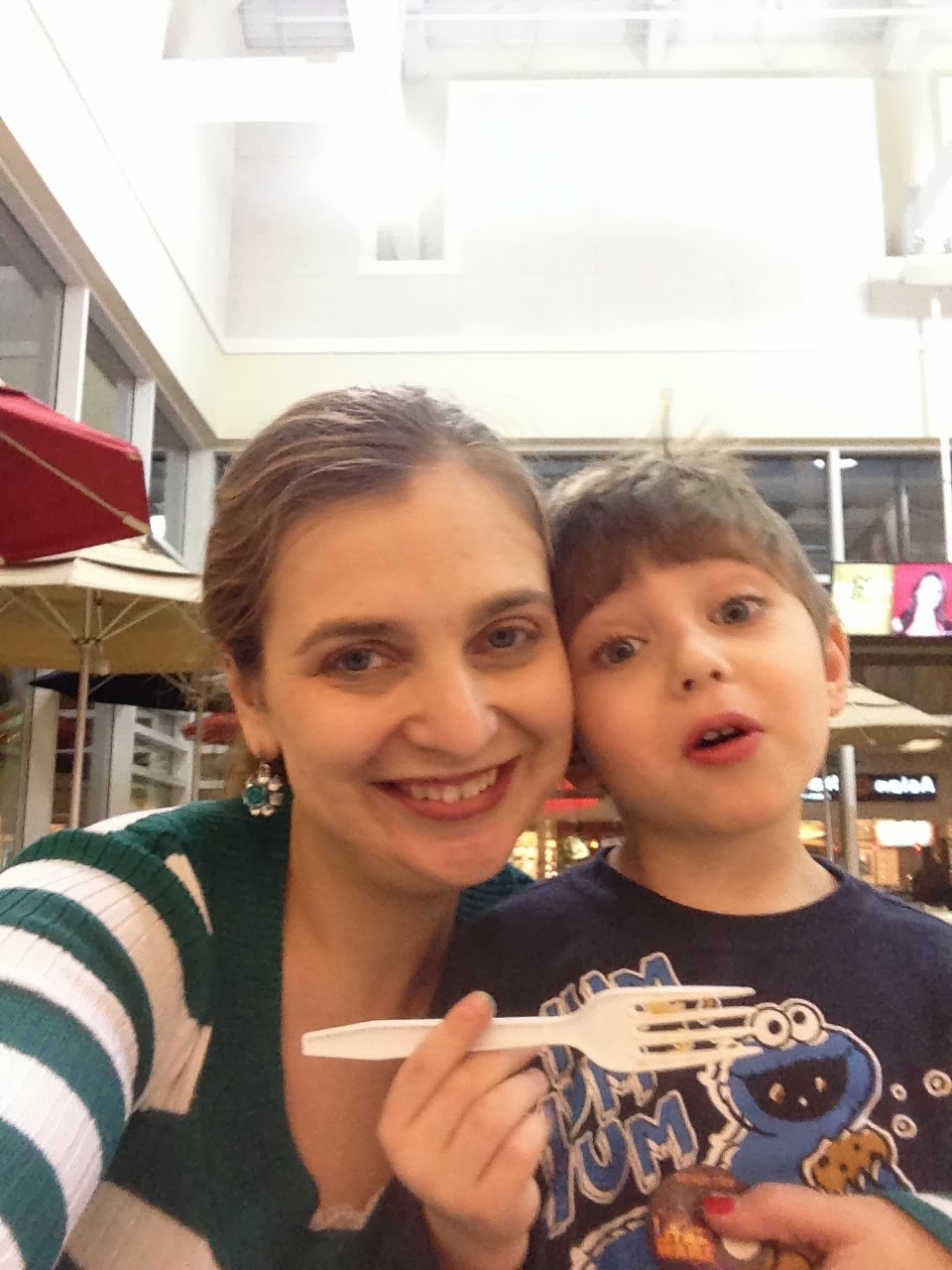 After our shopping (Christmas shirts at Gymboree for $4.99 apiece!), we stopped for Chinese food at the food court. What is really nice is that Nick, Henry, and I can all split a meal for less than $10. No wasted food and happy children. 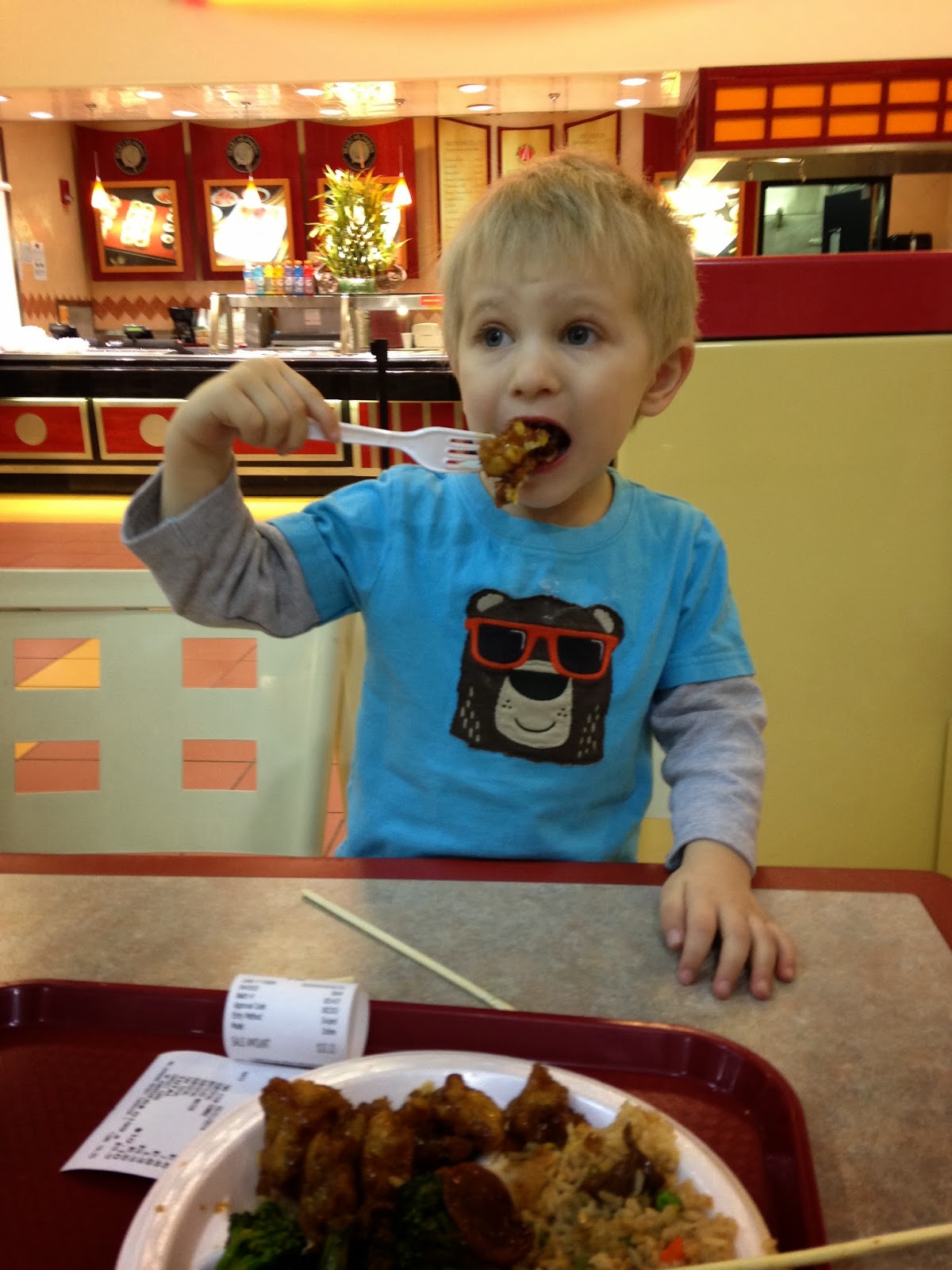 Although Henry did eat a lot, he started spitting food at one point. I am absolutely determined to break him of this habit, so I told him if he did it again he would NOT get a treat. He's testing me, and of course he spit food. I held firm. Henry was absolutely devastated. 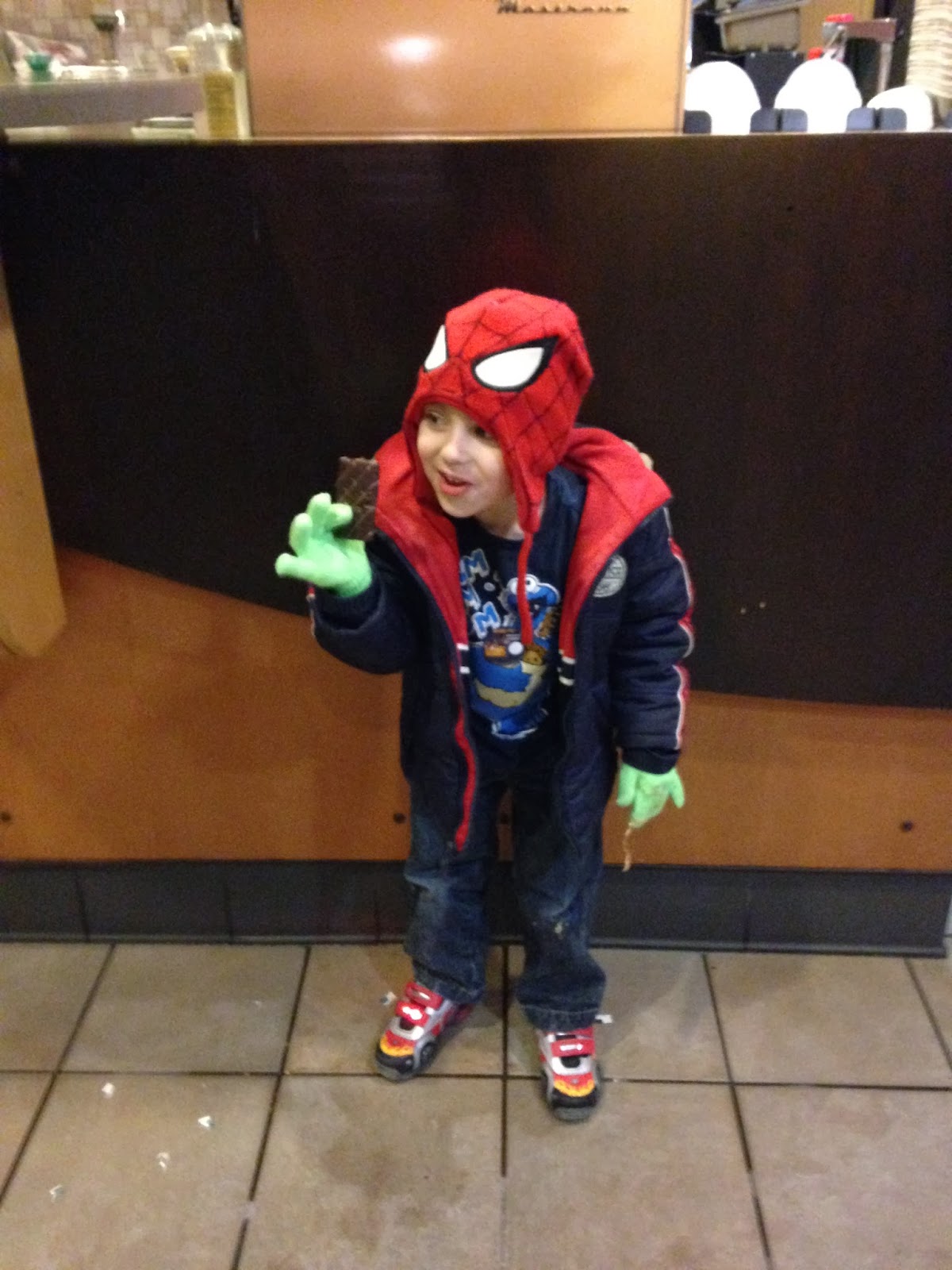 Nick received an extra-fancy dark chocolate covered graham cracker. Henry received nothing. He was upset, but able to explain why he didn't get a cookie. I count that as progress. So if two hours at an outlet mall on a Friday night wasn't stimulating enough, I decided to break down and get them haircuts. Henry liked it, and sat still very well. The stylist told me that Henry has the toughest kind of hair to style, because it's so straight and argumentative but might be curly if it were longer. 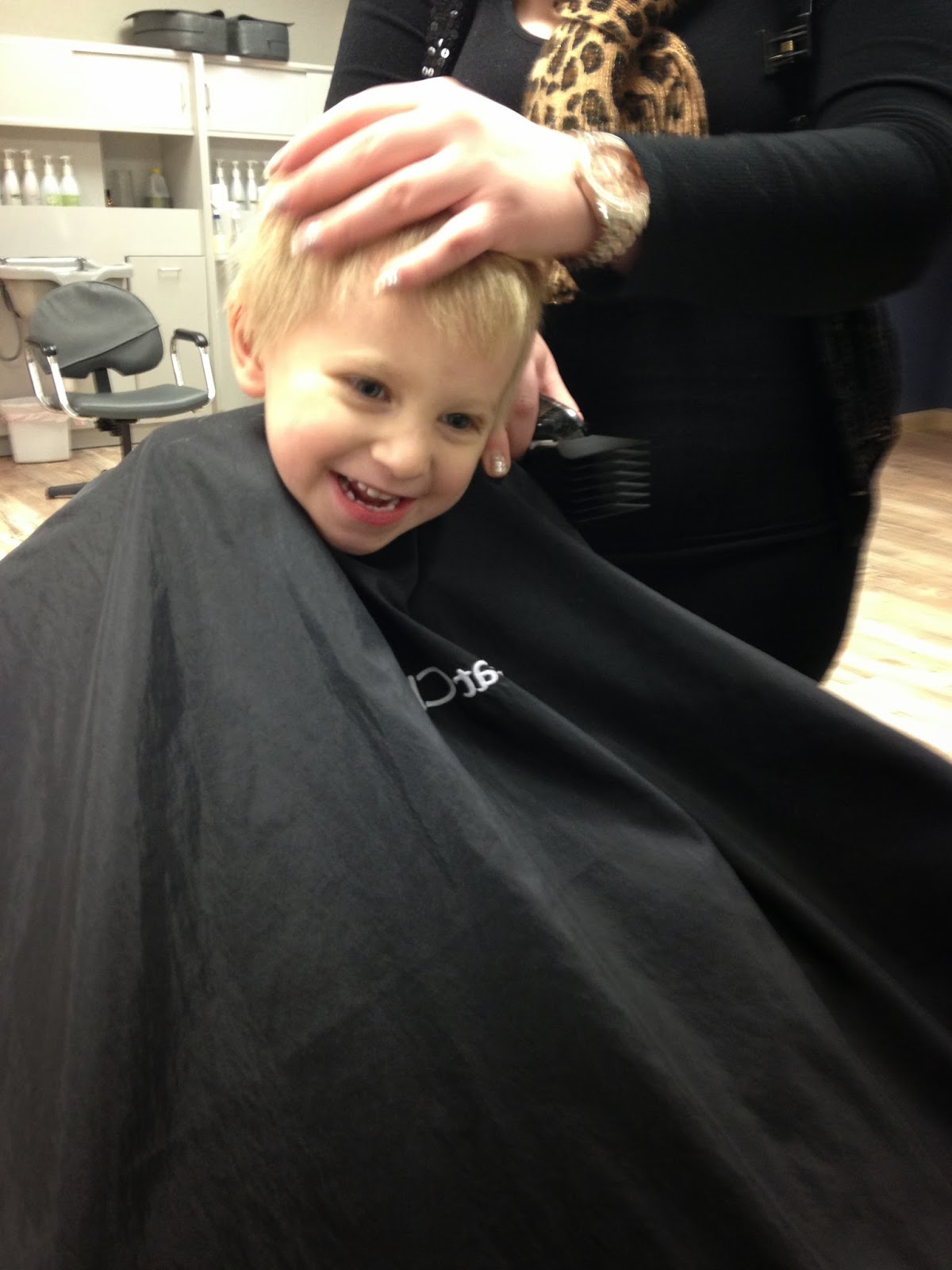 We went for the short look for Henry, and I like it. What do you think?

Nick was a little more wiggly, though he tried his best to sit still. I think it looks okay, and it isn't quite as shaggy. Nick's hair is very thick on top, and it's hard to keep the cowlick down. 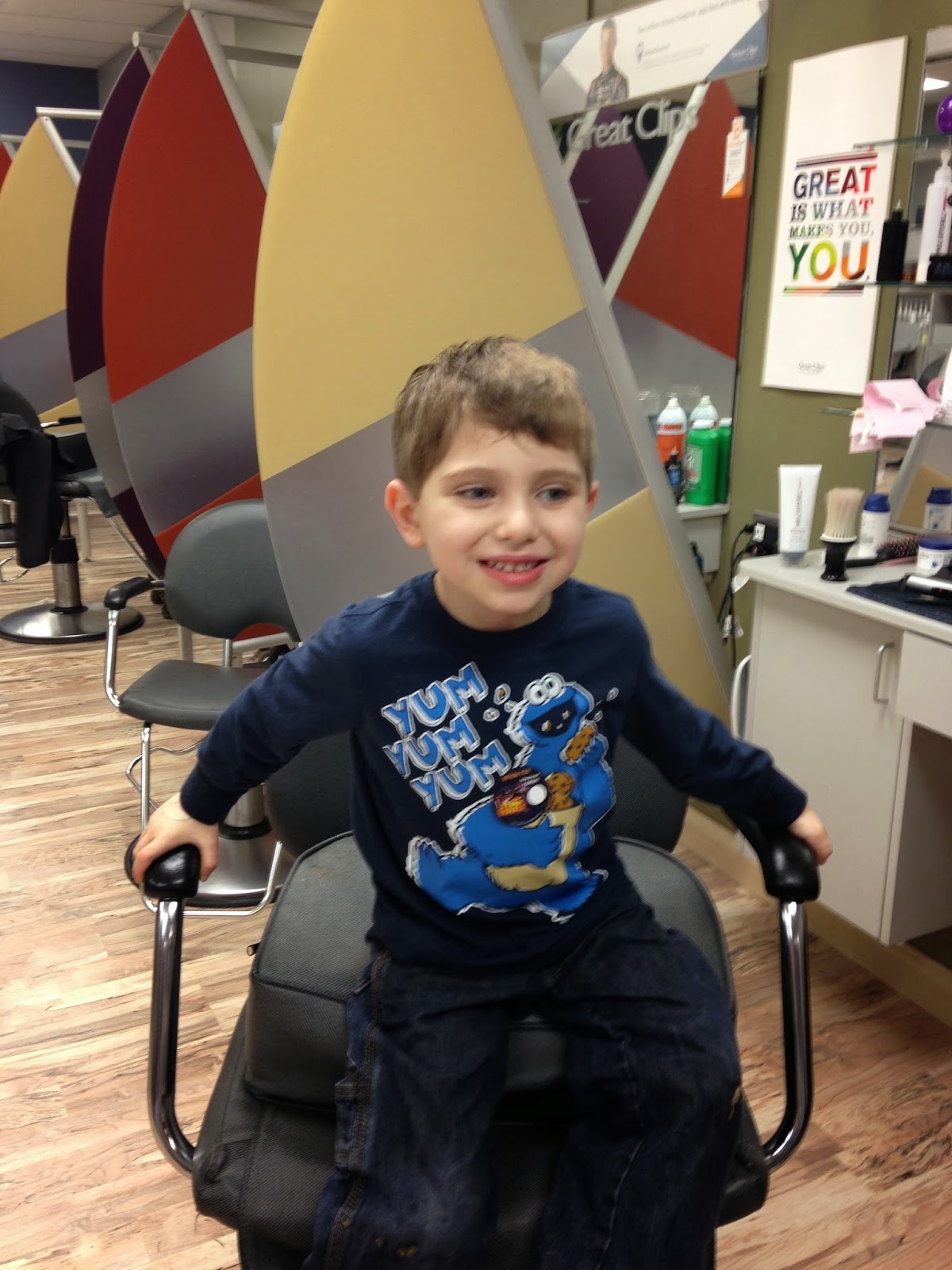 After haircutting, all of us were exhausted, and we drove home for snuggles and bedtime. Henry and Nick wanted a picture with their new shoes. Check out Henry's Star Wars shoes that light up with blue light sabers on the side. He picked them out himself and told every single person we encountered (we're talking 10+ people here) all about the shoes. I don't know if they understood him, but he sure chattered away. "Look at my new shoes! I got new shoes with light sabers! They are Star Wars shoes! Look!" (as he stomps his feet in joy). 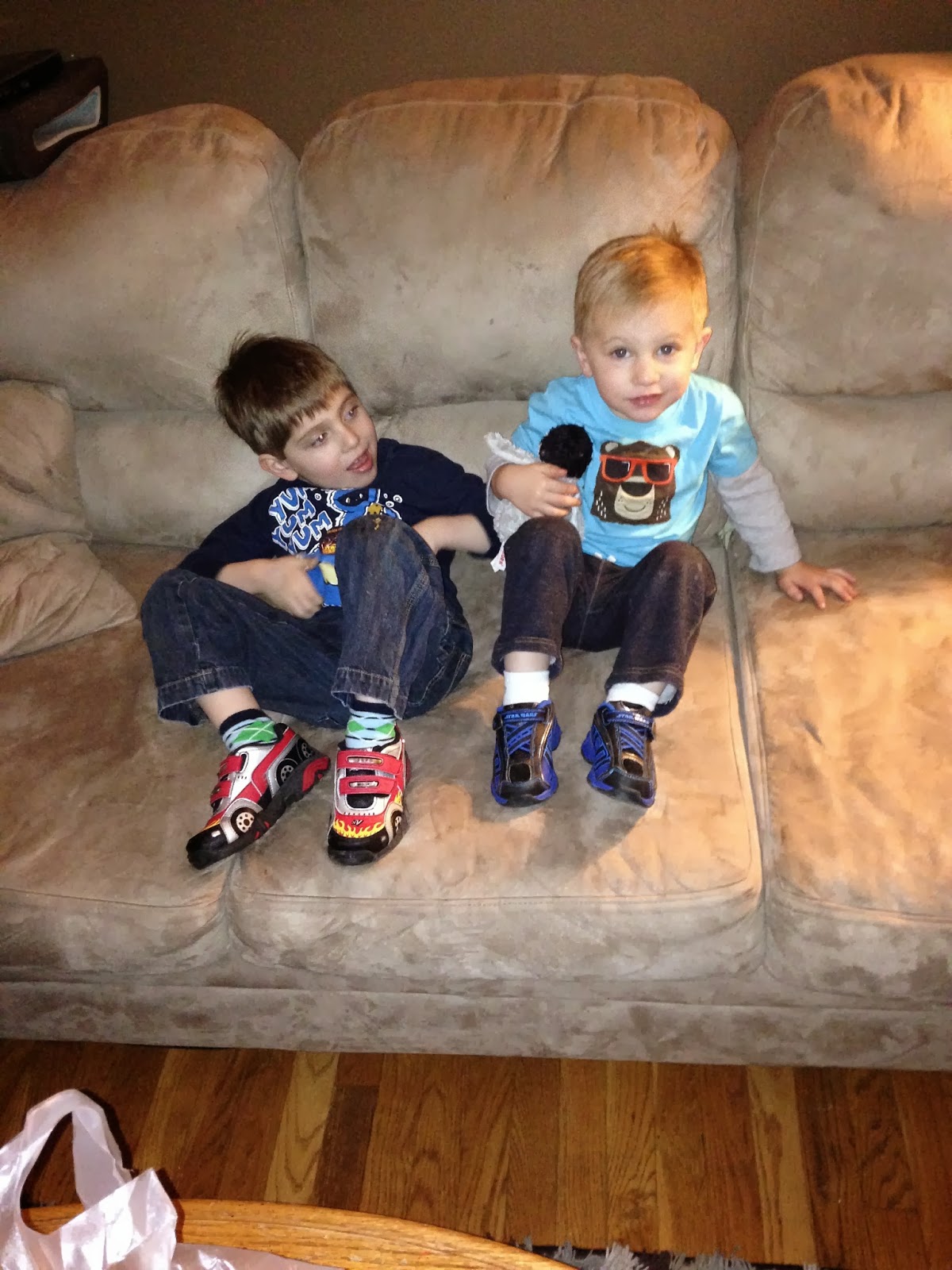 I know it might seem a little silly to get so excited after a successful evening, but it is times like these that help keep me going when we have a rough outing. (For example, the auto show last week. I'll write more about that later.) 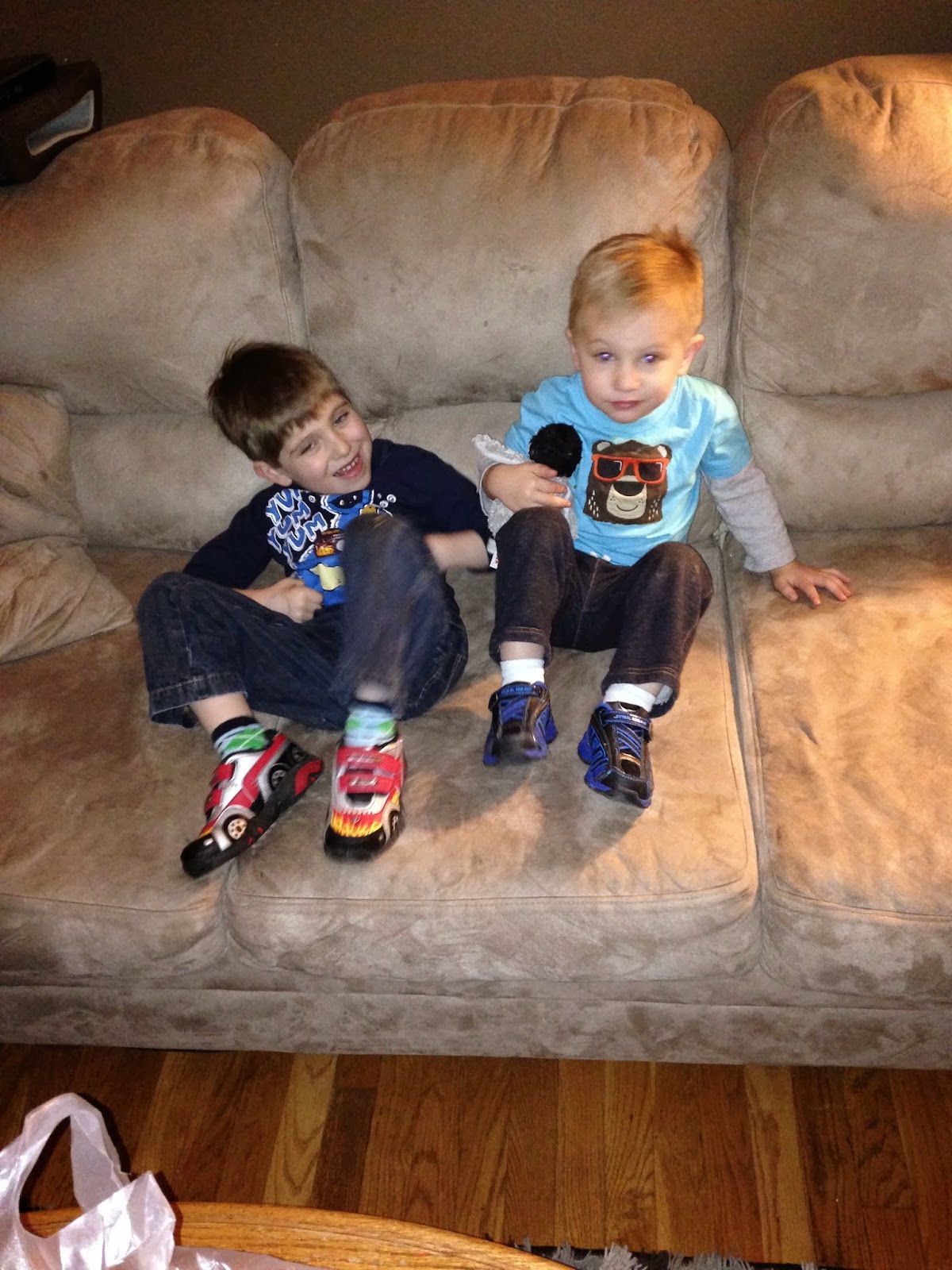 This probably wasn't my most exciting post, but then you didn't see the deals that I got. Nicholas was a gentleman and opened every door for me and Henry with the stroller. I was able to reason with him and calm him down the first time he started whining, and no more whining happened the whole trip. I'm really proud of this, perhaps more so than some of my professional and personal accomplishments.
Posted by Melissa E. at 9:29 PM