I'm always looking for interesting things to do with my boys on Saturdays. Greg works on Saturdays, so it's just me and Nick and Henry. On August 11th, we decided to visit Veggie Fest 2012 in Naperville. 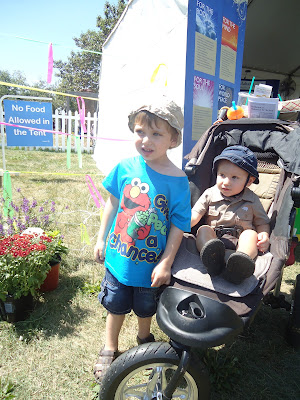 Nick wore his new t-shirt for the occasion. It says "Give peas a chance," and I thought it was appropriate for a vegetarian festival. Now, Greg and I are decidedly not vegetarian, let alone vegan. But I figured that maybe I'd pick up some yummy recipes. Besides, both of my boys generally enjoy eating most vegetables, and I'd like to continue to encourage this positive attitude. What better way to do that than getting vegetables painted on your face? 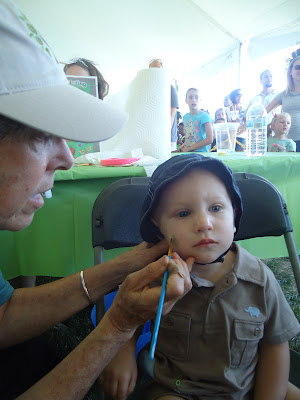 Henry had his face painted for the very first time. We chose an ear of corn. 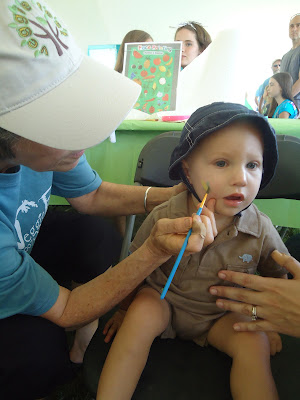 Henry did pretty well for his first time. It must've tickled, but Henry didn't complain. He did try to grab the paintbrush a time or two, though. Nick chose a carrot, and was pleased with the results. 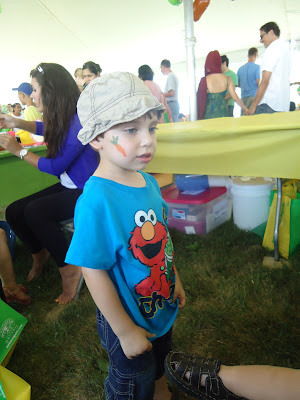 In the children's tent, we watched some performers and Nick did some dancing. Yes, that is a dancing bunch of grapes. They were singing a song about not eating anything with a face. 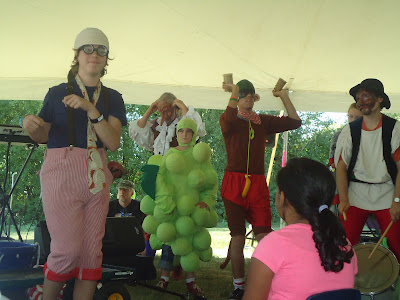 There was a meditation tent that Nick wanted to go in really bad, but I explained to him that, "For meditation, you have to be very quiet and still." Nick wasn't into that, so we went to a different tent. We watched a cooking demonstration and tasted some yummy Indian food. Nick and Henry ate a ton of granola. 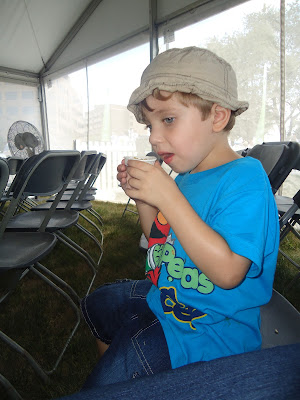 The smoothies were a big hit with all of us. We tried this yummy rice dish on top of an Indian flatbread. That was delicious. We also had some veggie kabobs, but I think they must've had some soy in the "chicken." Both of my boys (and I as well) are extremely intolerant of soy. We wouldn't make very good vegetarians, I think. The veggies and fruits we ate, though, were very well prepared. I think I might be willing to try a vegetarian meal now and then. 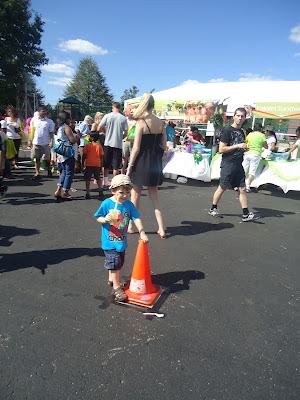 I would definitely visit Veggie Fest again. I think Henry and Nick both agree. 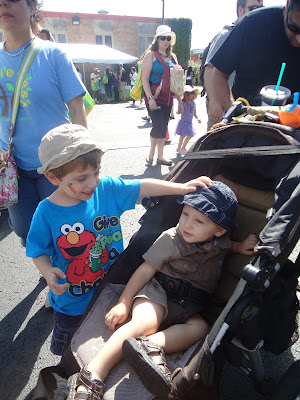 I thought this festival was interesting, fun, and a great way to learn about new foods and cultures. I have to be honest, though. When we got home later, we went with hamburgers for dinner.
Posted by Melissa E. at 9:44 PM