Nick starts preschool this Thursday, and man, is he excited! He's been asking us for nearly a year, "When can I go to school?" On Monday, Nick and I had a little date at the Target, where we had to shop for a whole list of school supplies. 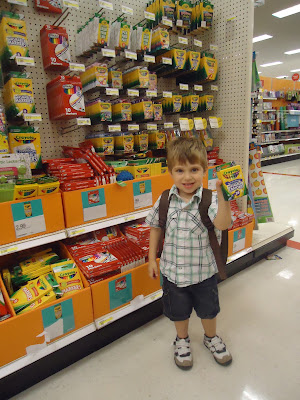 I was surprised at how many school supplies Nick needed for three-year-old preschool. He's going into a four day, two hour program through our local school district. I shouldn't complain, though. The school told me not to worry that he isn't completely potty trained yet. (Completely? Going on the potty can happen either 17 or 0 times per day, depending on Nick's particular mood.)

The school supplies were pretty typical, crayons and glue sticks and such. But Nick did need a thermos for bringing milk and a folder. I let him pick his own folder and thermos. He chose a Cars thermos (the most expensive one in the store, of course) and a folder with race cars. I had already picked his backpack for him (I went with the $5 Kohl's Skippyjohn Jones one because, well, it was only $5!) and he didn't seem to care that I did the choosing. I was a little disappointed at the selection of folders for boys (and with the lack of unisex ones). Nick got to choose between car folders, skateboarding folders, and plain ones. That was all we could find. 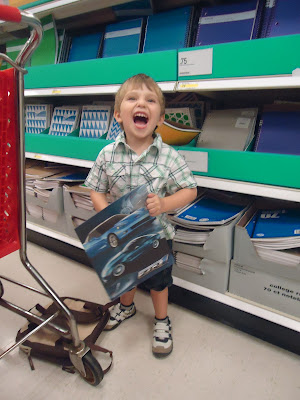 When I was a kid, shopping for school supplies was my absolute favorite thing about August. I especially loved shopping with my dad, because he didn't argue with me to get the $0.39 plain folder instead of the $0.99 one with unicorns. "Throw it in the cart," my dad would say. That's how he rolled. (Literally. That cart kept rolling because my dad just wanted to get out of the store.) My mom was a little different, more particular about price. She also checked that list carefully to make sure I was only buying what was on the list. I have to say, though, that she spent a lot more time helping me pick the best items. She wouldn't get mad if I deliberated for five minutes between the purple sparkly binder and the one with kittens. I wonder if she had some inkling that she had a future teacher on her hands? 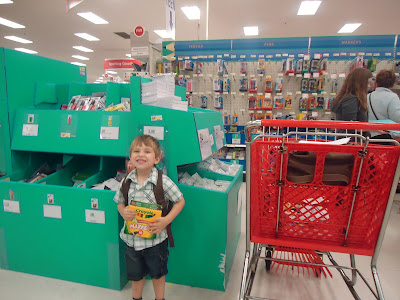 Back to school shopping is something I still adore, even if I'm now the teacher instead of the student. Is it any surprise that I made our fulfillment of the supply list into a special afternoon? Nick and I even stopped at the Starbucks Cafe afterwards for some coffee cake and a drink. 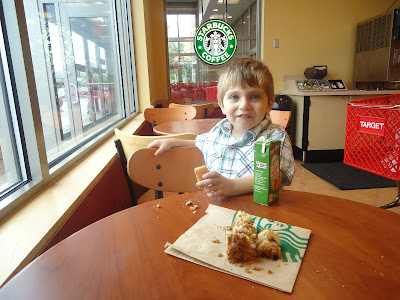 I will be staying up a little late tonight to label all of Nick's supplies with a good 'ol Sharpie.
Posted by Melissa E. at 9:52 PM