A Tale of Stubbornness and Very Cold Water

If perhaps you were thinking that the stubbornness referred to in the title was that of one of my children, you were wrong. This is a tale of a tenacious mommy who decided to buy a kiddie pool and refused to give up, even when the task proved nearly insurmountable. In the end, this mommy (me, of course) triumphed, at least partially. 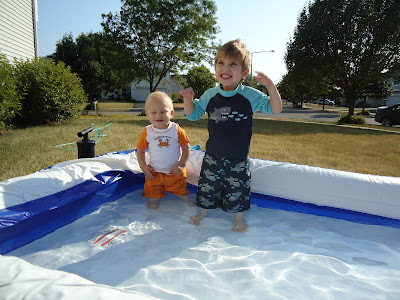 It all started when I decided (spontaneously, on the way home from my last day of summer school) to buy a little kiddie pool for the boys. I ran in to the Walmart, hoping to find one of those little plastic pools that kids can splash around in without too much trouble. My mom has one and Nick loves it. But they didn't have that kind, at least not one that would fit in my car. Instead, all they had was this blow-up pool. 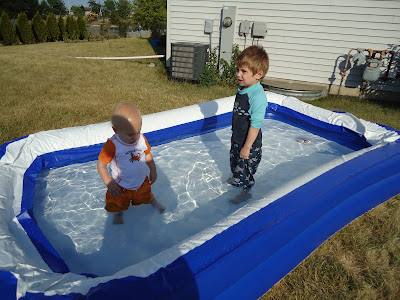 I've had a blow-up pool before, and I figured it'd be pretty easy to set up. But perhaps that's because my husband was always the one setting up the pool. I bought a double pump that is supposed to work faster than a regular pump because it pumps air on the down and the up, if you know what I mean. Grandma Toni was inside while the boys napped, so I headed outside. . . 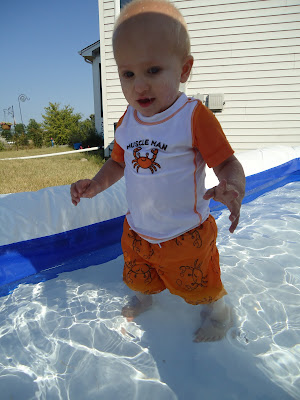 . . . and three hours later I was still pumping. It was in the 90s, and so humid that the sweat from my forehead kept getting into my contact lenses, but I persevered. I thought many times about giving up, but I can be very determined when I want something. I wanted the boys to be able to go for a swim. The pool was much bigger than I'd originally thought. Also, this pool has three layers to fill up with air. I thought I was nearly done when I filled up the first layer. Then I realized I was only 1/3 of the way done after 2 hours. I pumped for another hour, working on the second layer, but then I figured that my kids didn't need to have the pool very deep because, after all, they are short. So I stopped and filled it with water. 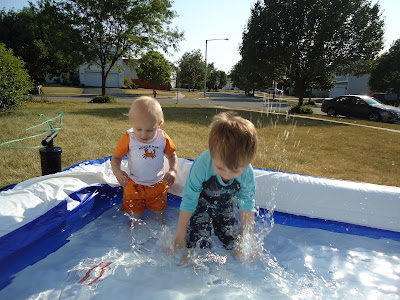 At that point, I started to realize that water from the hose is extremely cold. After standing in the water for about five minutes while filling up the pool, I couldn't even feel my feet. 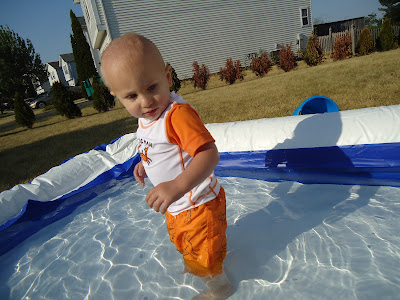 Poor Henry got cold pretty fast, too, and started shivering. I think I only had him in the pool about ten minutes. Nick, however, stayed in for an hour and a half or more. He kept climbing in and out, but he loved our little half-filled pool. 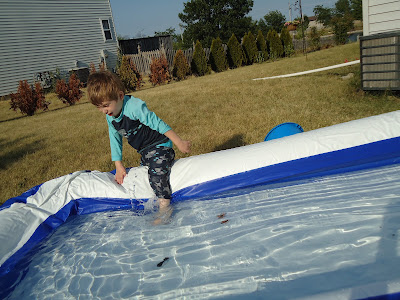 I think I may have discovered the next big thing in exercise equipment. Using a hand pump to fill up a kiddie pool is about the most exhausting workout I can imagine. I treated myself to two cupcakes later on for dinner. After all, I earned them.
Posted by Melissa E. at 4:48 PM